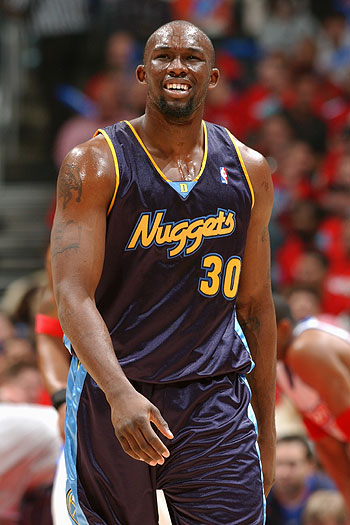 Can you find a better word to describe the Raptors play last night other than perfection? I can’t. Last nights match-up against the Denver Nuggets was an absolute joy to watch as the Raps came out of the gate with guns a blazing. Before you could blink the Raps were up 12-0, and 36-15 at the end of the first quarter. The team never let up and after tearing off 72 points at the half the final result of the game was never really in doubt.

They took it to the Nuggets and all the team from Denver could do was grin and bear it.

If you watched last nights game what you saw was what happens when 12 guys all pull in the same direction, know their role, and do their part. Whether it was TJ Ford getting the rock to guys the rock where they like it (he almost racked up a double-double in points and assists by the end of the first quarter) or Morris Peterson coming off the bench and giving the team a scoring lift (welcome back Mo Pete) these guys looked like a true team, in every sense of the word.

Unfortunately the same thing cannot be said for Denver. Now I can’t really judge the Nuggets on one game and I don’t watch many Denver games, but this team looks totally out of sync and I have to wonder whether the AI - Carmelo experiment is one that is going to work out. Their starting five looked like five individuals all trying to get theirs, the complete polar opposite to the Raps. Maybe it was just a bad night for them and statistics would evidence that as Iverson and Carmelo were held to 24 points between them five less than Anthony’s season scoring average, but I can’t help but think that even when this team is on that they headed for nothing more than a first round exit.

Holding Carmelo Anthony to 3-15 shooting is no small feat and much of that credit has to go to a guy who has fallen off the radar screen as of late, Jorge Garbajosa. As we at the HQ have mentioned a few times, when the playoffs role around Garbo is the ultimate x-factor and last night he showed why. Not only was he effective on the offensive end, scoring 21 points in the first half, but he was primarily responsible for shutting down the Syracuse product. Garbajosa will never be mistake for an athletic specimen but that does not stop him from playing hard nosed D. He uses his high basketball IQ and years of experience more than anything else to make it difficult on his opponent. If the team can rely on him to play at this level when the playoffs come around things could get very interesting.

Of course it is hard to talk about the teams defense when it was clearly their offense that stole the show last night and a show it was. At one point the Raps were shooting 70% and could do no wrong. When Mo Pete hit a ridiculous the three to end the first quarter you knew it was just the Raps night and the fans were eating it up. One guy that apparently didn’t appreciate all of the Raps success on the offensive end was Reggie Evans.

Late in the game Bosh took his patented jumper from just above the free throw line with Evans guarding him. In a Bruce Bowen sort of way Evans managed to get his foot under Chris’s "space" forcing the Raps star to roll an ankle and forcing him to leave the game. Much of the post game discussion surrounded the play and the subsequent action when Rasho put a hard foul on Evans resulting in a bloodied mouth. It now seems that Bosh should be ok (this team cannot afford another bad ankle) and you have to love Rasho stepping up to send a message.

It will be interesting to see if the Raps can ride this wave and clinch a playoff spot earlier rather than later as despite the great performance, these guys could use some rest before the games really start to count.

On a final note, whether it was the fact that everyone got a Chuck Swirsky bobble-head or just the anticipation of playoff basketball the ACC was live last night like it hasn’t been for a Raps game in years. If you have not been to a game yet this year or are looking for playoff tickets I would get them now because they are quickly becoming the most entertaining show in town.