Share All sharing options for: Game-Day Preview - Raptors vs. Nuggets 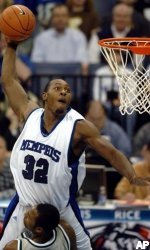 Greg Oden and the rest of the Ohio State Buckeyes should be kissing the ground Ron Lewis walks on.

Lewis torched Tennessee last night in Ohio State’s incredible come-from-behind victory and was the only reason the Buckeyes were able to hang around until Mike Conley Jr and co. got it going offensively. Lewis had 25 points on nine for 17 shooting and reaffirmed my belief that he would be a solid second round option for the Raptors.

In fact Lewis finds himself sitting in the third spot behind Derrick Byars and Herbert Hill on our prospect watch, (see HQ home page) which will now be updated regularly as we approach the draft.

We debated on how to rank our top prospects as of course there are several ways you could look at things.

Of course it’s nearly impossible that any of the above will end up in a Raptors uniform next season so the next way to look at it might be who we’d like most to see Bryan Colangelo make a play for out of the remaining first round prospects. Then the list would look something like this:

However last night the consensus was that it’s simply too early to know if all of these players will even be in the draft let alone in the first round or available via trade.

Therefore for now we’ve decided to focus only on the second round where Toronto has a selection to make and on players who are very likely to be available come second round. If this changes, we’ll update accordingly.

One player who looks to be returning to school but who I’d love to see the Raptors take a shot at is Tennessee’s Chris Lofton. Lofton matched Lewis last night almost shot for shot as he finished with 24 points on 9 for 18 shooting. He’s a bit of a combo guard ala Ben Gordon but his speed, scoring and leadership abilities will probably get him drafted in the first round of next year’s draft.

And speaking of leadership abilities Mike Conley Jr. has all the making of a star when he eventually enters the NBA. His all-around abilities and decision making remind me of Chris Paul when he was at Wake Forest, a pretty lofty comparison I realize. However on a night when Greg Oden struggled with foul trouble, it was Conley Jr. who kept his team focused even after being down by as many as 20 at points in the first half and kept making the right plays at both ends of the court to help lead his team back to victory.

-Gotta feel for Acie Law. Much like Darius Washington will be remembered for missing two of three free throws costing his team a spot in the NCAA tournament in 2005, Law might be remembered for missing a contested lay-up in the game’s final seconds which probably would have sent the Aggies on to the next round of the tournament. Instead, his team allowed Memphis three straight offensive rebounds on the ensuing possession and the Tigers moved on in a 65 to 64 victory.

-Props to Southern Illinois for giving Kansas all they could handle. The Salukis defence was outstanding but Brandon Rush was the difference in the end with 12 points, five rebounds and five assists and Kansas moves on.

-UCLA/Pitt wasn’t pretty, but UCLA’s D got the job done. Now they’ve got the tough task of facing Kansas tomorrow night. However after seeing Southern Illinois take the Jayhawks down to the wire last night with tough D, the Bruins must feel like they’ve got a serious shot at a win.

-Memphis has totally impressed me this tournament. The team is so athletic and should be a major test for Ohio State tomorrow evening. And can the Raptors please make a play for Joey Dorsey when he’s done at Memphis? The kid is a MONSTER! After he had fouled out last night CBS showed him on the bench without his jersey on and his arms looked like those of Ludacris’ in the "Get Back" video!!

The Raps could really use some muscle like that, especially this evening against the Denver Nuggets. The Nuggets are coming off a last second loss to the Chicago Bulls last night thanks to a Tyrus Thomas tip-in with 0.2 left on the clock that ended a string of five straight wins.

Denver has the size up front in Nene, Marcus Camby, Eduardo Najera and Reggie Evans that could give the Raptors some problems on the glass and this is going to be a key factor this evening. If Toronto can do a good job on the glass then they may be able to control the tempo of the game, something they’ll want to try and do against the league’s third-highest scoring club. Denver likes to push the pace and they’ve certainly got the horses to do it.

They also excel at getting to the free throw line thanks to the individual match-up problems created by the likes of Allen Iverson and Carmello Anthony. If Toronto can run its offence and prevent the Nuggets from getting out on the break and to the rim, then instead of a track meet, the Raptors should be able to keep this one close.

We may see Juan Dixon start tonight to guard Iverson with Jorge Garbajosa having to stick with Mello as it sounds like Anthony Parker is a no go. Jose Calderon practiced yesterday and will likely be a game time decision but in any event, the bench crew needs to play well if the Raptors want to continue to shrink their magic number to clinch the Atlantic. Denver is quite deep with the likes of JR Smith and Linas Kleiza able to put up points in a hurry and I’ll be looking for Sam Mitchell to counter this with effective management of his own reserves.

I’m also going to be looking at Toronto’s defensive sets. The Nuggets are the second-worst long-range shooting team in the league so I’m expecting to see some zone deployment to take away the one-on-one match-up advantages Iverson and Melo present and force Denver into a three-point shooting contest.

And finally, Denver averages 16.5 turnovers a game, worst in the Association. If the Raptors can deploy an effective zone and get into the passing lanes this should open things up on the break for them. I’d actually like to see Toronto use a full-court Southern Illinois-esque scheme tonight but I guess I’ll have to settle for a solid half-court effort and hopefully a win.