Tip-In: All Hands On Deck

Share All sharing options for: Tip-In: All Hands On Deck 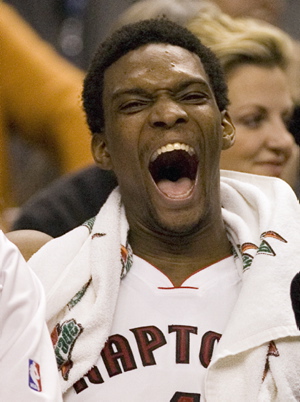 This recap has gotta start and end with Chris Bosh.

What more can you say?

Bosh had 34 points, 16 rebounds, two blocks and a steal in what was perhaps his most dominant performance of the season. It was he and TJ Ford (16 points and 12 assists for Ford) who led the charge for the undermanned Raps last night in a 92-85 win over the Orlando Magic, shrinking Toronto’s magic number to clinch the Atlantic to nine.

Orlando hung around in this game as besides Bosh, the rest of the Raps didn’t shoot the ball very well (42.3 per cent from the field) and missed nine free throws. Kris Humphries in particular needs to put in some work at the line as with Andrea out, he’ll be the benefactor of an increase in minutes and his style of play lends itself to free-throw attempts. He hit on only two of his six attempts last night however did grab six rebounds and played some solid defence on Dwight Howard.

In fact Howard was hardly involved in this game until the second half. He finished with 17 points and 12 rebounds but had only eight shots from the field and was a putrid five for 13 from the free-throw line. His team-mates didn’t help matters as time and time again they settled for jump-shots in the first half and interestingly, I found watching the Magic last night much like watching last year’s version of the Raptors – not enough touches for the franchise player, no one getting to the rim and a starting point guard who shot four for 12 from the field and far too often looked for his own offence first.

And speaking of "me-first" type of playing, what about Darko Milicic? After watching last night’s game I’m just not sure that Bryan Colangelo should be courting him come this off-season. Of course I’m not going to question BC’s judgment, but between showing absolutely no effort on the court, no real development in his game and a terrible attitude via his ridiculous technical foul, (which led to Jack Armstrong stating "until you start putting up some numbers in this league kid, shut ya mouth") I can’t understand why anyone would offer Darko a large deal next year or believe that he can still justify his draft status!

The game also left me wondering if Brian Hill is going to be around next season. His Magic play decently on the defensive end of the court but offensively the team doesn’t play to its strengths. Grant Hill single-handedly kept the Magic in the game which is ridiculous when you have someone like Dwight Howard in the post. Sure Howard’s offensive repertoire isn’t much more advanced than that of Erik Dampier as of now, however his size and strength should be used much like Shaq so that the ball goes in to Howard first and then players like Trevor Ariza can cut to the basket and look to draw contact. You saw in the third quarter that when Orlando did this, they cut into Toronto’s lead and had their greatest success in terms of scoring the ball.

But a lot of credit for this win has to go to Sam Mitchell who thoroughly out-coached Hill last night. At one point Mitchell had Rasho Nesterovic, Chris Bosh and Kris Humphries all on the court at the same time and the Magic simply couldn’t get touches for Howard and settled for long-range shots which they continued to brick. Starting SF Hedo Turkoglu was one for 11, backup point guard Keyon Dooling finished three for 12, and besides Howard and Hill, the rest of the Magic just couldn’t hit a shot. Mitchell adjusted to this and forced Orlando to keep dialing it up from long distance, which they did. He also did a great job I thought of adjusting his rotation. When Mo Pete picked up two quick fouls he went with Joey Graham instead of Juan Dixon and Joey turned in a strong performance as a result. This move also kept Dixon from being burnt out in the game’s final quarter and he finished with a solid 15 points, seven rebounds and two assists. Finally, Mitchell was forced to play both Chris Bosh and TJ Ford for almost the entire game, yet did a great job of extending their rest on the bench as much as possible and as a result we even had a Pape Sow sighting!

The thing with this win however is that while it’s one thing to beat a Magic squad that would have had trouble getting a tennis ball through the hoop last night, it’s another to play the same way against a Denver squad featuring two of the league’s top five scorers. To get through this injury-plagued stretch the Raptors are going to need some big help from their bench as Bosh can’t be superman all the time. Peterson, Graham and Humphries are the obvious players who need to step up but I’d also like to see Jorge Garbajosa shoot a bit better (he was one for seven last night) and Pape Sow and Uros Slokar get some looks.

And further to this, how about the Raptors just leave Parker out for the next while?? I don’t know about you but I’m sick of this "he’s playing, he’s not playing" thing and having undergone major ankle issues thanks to basketball myself, (and in part as a result of wearing shoes that were too big thus having to fill them up with Sobeys bags – but that’s another story) I know just how long it can take for ankles to heal properly. Right now I’d much rather have a 100 per cent healthy Parker (and Calderon for that matter) come playoff time than have this day-to-day situation reoccurring for the rest of the year. Sit both of them until they are truly healed and yes, while this may result in some struggles in the short-term, it might also get Morris Peterson (who fouls aside did look a bit more focused last night) and others more prepared come May.

CB4 is the unquestioned star and leader of this club. But that doesn’t mean that the rest of the Raptors can simply sit back and watch him get wins for the team all by himself.

Until we see a healthy Raptors squad once more, Sam Mitchell should be dishing out mops and pails while yelling "all hands on deck."