Share All sharing options for: Game-Day Preview - Raptors vs. Magic – UPDATE – 11:15 AM 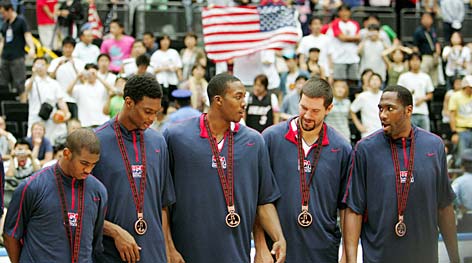 From draft talk we return to Raptor talk.

The New Jersey Nets dropped their match to Denver last night meaning that Toronto’s magic number to clinch is now down to 10. This means any combination of 10 Toronto wins or New Jersey losses will wrap up the Atlantic Division crown for the Raps.

And while New Jersey lost last night, it was a close loss to a Denver club that’s been playing much better as of late and Toronto shouldn’t have any reason to rest on its laurels. The Raps have regressed to last year’s club in terms of their play the past few matches and even since the All-Star break this team has been a model of inconsistency. It seems that in each game something goes wrong from offence to defence to 3 point shooting to rebounding.

It’s rebounding of course that’s going to be paramount in tonight’s game featuring the colossus known as Dwight Howard. Howard was 13 for 14 last time these teams met and while Toronto got the win due to the lack of help from Howard’s team-mates, the Raptors can’t take the chance that this will happen again.

For me, one of the biggest things I’ll be looking at tonight is Toronto’s defence. As many of our readers have noted, as Toronto’s offence goes, so does its D. When the shots are falling and the drives to the hoop for "And 1’s" are going down, the team seems to pick up the pace too at the other end of the court. As pointed out in a recent article by Sam Smith, its defence that’s going to determine the top playoff teams in the East and Toronto needs to start showing that it can compete in this area. Yes, overall the team has been much better defensively this season, but no one would argue that the team doesn’t still have a long way to go. Toronto sits at number 12 on ESPN.com’s current power rankings but a solid performance tonight and in the games to follow this week, should propel them back up in the top 10.

Toronto will be facing a completely healthy Magic team for the first time this season as both Grant Hill and Tony Battie will be in the lineup for Orlando. Anthony Parker is set to start again for Toronto but there’s been no word on the status of backup Jose Calderon.

No Calderon means that Toronto needs to get an A1 performance from TJ Ford after last Sunday’s debacle. Ford should have the advantage at the point guard spot where Jameer Nelson has struggled this year. If Ford starts getting into the paint and finding shooters as opposed to looking for his own offence, the Raps should be in good shape.

Of course Toronto’s shooters need me knock down the open shots they get and that means Morris Peterson. I’ll be curious to see how much time Mo Pete gets tonight but as I expected, Peterson’s been working diligently to break out of his recent slump so assuming he gets some minutes tonight, hopefully he can give Toronto a boost.

I’m also going to be watching this game very closely to see how the club adjusts after the last two horrific losses. Toronto still has some tough tests against the likes of Denver, Miami and Washington to close out the month so getting back on track with a win tonight is going to be very important. One of our readers wrote that the loss to the Knicks on Sunday felt like an ambush and I’d have to agree. However that’s why Toronto needs to bounce back with a solid effort tonight to prove that the loss was simply an aberration and not a sign that the club isn’t ready for the playoffs.

Otherwise, we might end up posting more draft articles on the site then we really want to...

UPDATE – Unfortunately when I put the Game Day preview up this morning the word had not come out about Bargnani and a big thank you to our readers for the update. According to the Toronto Star, Bargnani was sick after practice yesterday and early this morning underwent an emergency appendectomy. He’s expected now to miss the rest of the season, a huge blow to the Raps and to his own development and banner season. We’ll be discussing this much more tomorrow after tonight’s game but the big questions obviously now are:

a)Whether Andrea can return in time for the playoffs and
b)Whether Toronto can still make the playoffs after losing such an important piece of their rotation.