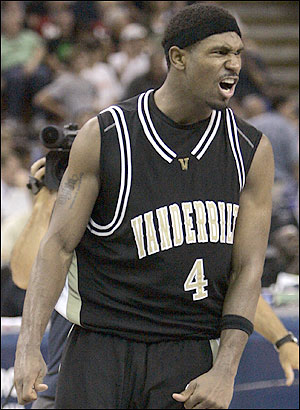 These of course are many of the names who’ve been thrown around by NCAA and NBA analysts this year. Whether they decide to take the leap to the NBA or not, these are some of college basketball’s cream of the crop.

Last season Toronto got a first-hand look at Division I’s top names since by March the team seemed inevitably lottery bound once again. Names like Tyrus Thomas, Rudy Gay, LaMarcus Aldridge and Adam Morrison were bandied around before the Raptors seized the top pick and eventually selected a foreign player, Andrea Bargnani.

This year of course is a different story. Barring a tumble in the Eastern Conference standings (ie. a meltdown of epic proportions) the Raptors will be giving up their first round pick to the Charlotte Bobcats leaving them "pickless" until the second round.

And yet even in the second round based on Toronto’s current record they could be picking as low as 50th and therefore looking at some real projects or less-known foreign players. In fact, if Bryan Colangelo can’t get the Raptors into the first round of the draft or simply doesn’t see anyone in it who piques his interest, I imagine he’ll simply look to package the pick to go after a particular player currently in the league or (and this is an obvious or) grab a foreign player that he can stash overseas to develop.

However under the assumption that every player expected to be part of this year’s draft does declare, I truly feel that there will be some great options available in the second round and even late in the first. This could be the deepest (and most talent-filled) draft in years if everyone comes out, and the following five are players who right now seem to be a bit underrated even though they’ve caught the attention of scouts with their play in this tournament:

1. Derek Byars - Byars has flown under the radar to a certain extent playing for Vanderbilt but if you’ve seen him so far in the tournament, you’ll know why he would be a good fit for this club. He’s a legit 6-6 with the quickness and scoring ability that would be great off the bench for the Raptors not to mention his leadership skills which were on full display as he took over for Vandy in over-time this past weekend against Washington State. Most impressive however is his tremendous strength, toughness and defensive abilities, all characteristics that would make him a solid addition to the Raptors. While not the most athletic prospect, he is an excellent rebounder for his position (averages nearly five boards a game) and has good court vision for someone his size. The runner-up for the SEC’s player of the year award is now slotted as a high second-round option at Draftexpress.com (and for some reason isn’t even on ESPN.com’s list of top 100 prospects) but could move into the late first round if he continues to lead Vandy.

2. Nick Young – After Byars, perhaps the player who’s stood out the most in the tournament so far for me is Young. A 6-6 SG/SF, Young has drawn comparisons to Josh Howard and with his overall skill level and play this tournament, it’s almost impossible that he’ll be around when Toronto picks in the second half of the draft. However that’s not to say that he’s not a player that Colangelo shouldn’t make a play for. Young is a straight-up scorer and has been burning teams up so far this tournament with USC. His mid-range game is one of the best in college and he shot over 50 per cent from the field this past season. While a bit on the skinny side, Young has good vertical explosiveness and can finish in traffic, something Toronto has needed in a big way this season.

3. Brandon Rush – It boggles my mind as to why Rush isn’t rated higher on most draft boards. Draftexpress.com has him slated to be drafted at #23 which seems pretty close to where I think he’ll go, but ESPN.com doesn’t have him in the first round and NBADraft.net obviously thinks he’ll be returning to Kansas next season as he’s not even listed with them! Assuming Rush does come out, this is a player I’d love to see in a Raptors jersey come next October. Rush has been great for Kansas in this tourney and while doesn’t possess the jaw-dropping athletic ability of his teammate Julian Wright, is perhaps the most well-rounded player in the draft after Kevin Durant. Rush is an excellent defender, a good scorer who can both slash to the rim and hit a shot from just about anywhere on the court, (witness his 3-point barrage against Kentucky last weekend) and perhaps most importantly, appears to be one of the most NBA-ready of the upcoming group of prospects. If Kansas goes all the way this year expect to see him in the draft and while the Paul Pierce comparisons seems a bit of a stretch, he’d be a great replacement for Mo Pete if Peterson leaves this off-season.

4. Ron Lewis – NBA GM’s should be selecting Lewis in the first round simply for his play last weekend against Xavier. His 27 points kept Ohio State in the game and his three-pointer with time winding down in the game ensured an OT period for the Buckeyes as they went on to defeat Xavier in the extra session and advance to the Sweet 16. Had Ohio State lost it seems more and more like Greg Oden would have felt he had much more to accomplish at the D1 level and returned to school. This could have completely altered the upcoming draft not to mention giving Danny Ainge a hernia. However enough Oden talk as Lewis himself is no slouch. His excellent tournament play has further cemented his reputation as an elite scorer and he has the speed and quickness to get to the rim at will. While he’s a bit one-dimensional at this point in his career and loses focus on D, he has all the physical gifts to be a solid defensive player and great role player for an NBA squad.

5. Josh McRoberts - Some may think this entry is because I’m a Duke fan but I truly feel that McRoberts would be a great fit for the Raptors. On top of this, because of his disappointing season, McRoberts might slip into the late first-round where BC could make a play for his services. He’s no Patrick Ewing offensively but is an excellent athlete for his size, good offensive rebounder and shot blocker, and more importantly, a great passer who would look good coming off the bench to play the 4 or 5 spots. He can be a bit passive offensively but right now Toronto needs rebounding and shot blocking, not someone who can come in and average 20 points.

Bonus – NIT Pick - Paul Harris – While only a freshman, bigger things were expected of the 6-4 guard this season when he was recruited. However after a slow start, Harris really began to put things together late in the season for the Orangemen and if you saw last night’s clobbering of San Diego State in the NIT, you saw just what an NBA talent Harris may be in a few seasons. Harris was absolutely unstoppable using his 40 inch vertical for highlight dunks while grabbing seven rebounds and dishing out three assists in only 23 minutes of action. He’s still not a great shooter but his intensity at both ends of the court, athleticism and lock-down defender abilities would make him a steal of a late pick for the Raptors if he doesn’t return to Syracuse next season.

(As an aside, so funny to hear Jack Armstrong doing the colour commentary for ESPNU in last night’s match. Great job as usual not to mention it was interesting to hear him discuss Leo Rautins and his son, who had 15 points last night for the Orangemen. HELLO!)

Finally, I’ve decided to profile a few other players who aren’t in this year’s tournament but who I feel Toronto should keep an eye on.

1. Herbert Hill – This 6-10 senior is another player who has greatly improved his game as the season progressed. Hill didn’t play much in his first two seasons at Providence but through hard work has become a possible late first-round or early second round selection due to his size and offensive skills down low. However it is Hill’s shot-blocking abilities that should really get Toronto’s attention. Hill uses his excellent length and anticipation to block and alter shots and with his blue collar attitude in the paint has drawn comparisons to the likes of John Salley. In Providence’s loss to Bradley in the NIT Hill had 19 points and 14 rebounds to go along with two blocks and if he’s still on the board in the second round, he would be a solid pick for a Raptors squad badly in need of some shot blocking and rebounding up front.

2. Hasheem Thabeet – Continuing with the shot blockers we have UConn’s Hasheem Thabeet. Thabeet sounds more and more like he’ll come out for this summer’s draft and while some have him pegged as a first-round pick, I can’t see it. He’s EXTREMELY raw, and besides his shot-blocking, doesn’t offer much else as of yet. Some have compared him to a more athletic Dikembe Mutumbo but he’s closer to Saer Sene at this point. However the old adage is that it’s hard to teach size and combined with this and his shot blocking abilities, some team may take a flyer on him in the first round. I’m hoping that he falls to Toronto late in the second round as even if he doesn’t develop any kind of offensive game for four years and becomes a Desagana Diop for Toronto off the bench, this would be an extremely solid second-round pick who would directly address one of the Raptors’ main needs.

3. Sean Williams - Big question with this next choice. Do you take a chance on someone with such a checkered past (he was tossed off of Boston College this past season for substance abuse issues) because of his potential? Williams is starting to look like the doppelganger of Eddie Griffin but his shot-blocking skills are perhaps the best of anyone not in the NBA. Could Sam Mitchell get this kid’s mind right? If so, he’s a first round talent who would equate to highway robbery in the second-round.

4. Al Thornton – Thornton so far is this draft’s Danny Granger or Rajon Rondo for me. In other words, the player I’d realistically like to see most in a Raptors uniform next year. Thornton’s Florida State club found itself on the outside of the NCAA tournament looking in however without big Al I’m not sure this club would have won three games all year. Thornton is an extremely athletic ¾ who has drawn comparisons to both Al Harrington because of his post-up game, and Shawn Marion because of his overall athletic abilities. In all likelihood Thornton will be gone in the mid-first round but that’s not going to stop me from dreaming of a Ford, Parker, Thornton, Bosh, Bargnani starting five next training camp...

Bonus – Randolph Morris – Morris is sort of a strange player to evaluate in this space. Yes he played with Kentucky (and quite well I might add) in their first two games before being eliminated by Kansas but because of his draft issues from 2005, he’s not eligible to re-enter this upcoming draft class and will be a free agent. Morris has the size and fundamentals to be a legit NBA center and would provide Toronto with some necessary size and rebounding. He seems more of a Brendon Haywood lumbering type big-man of past, but if he could come off the bench for Toronto and give the club some key board-work, he might be a relatively cheap acquisition who could pay dividends.