Share All sharing options for: Game-Day Preview - Raptors vs. Bucks 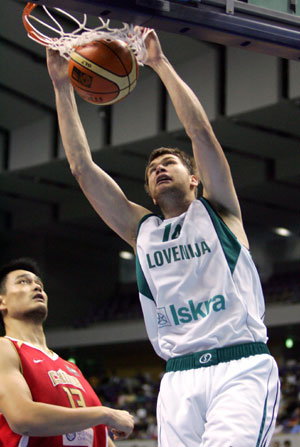 Toronto enters the month of March atop the Atlantic and only percentage points behind Cleveland and Washington for second spot in the Eastern Conference.

Tonight, they’ll get to resume their playoff push by taking on the Milwaukee Bucks at the ACC.

Glancing at the schedule for the month of March, you can’t help but think that if Toronto wants to really put some ground between them and their competition, this is the month to do it. Aside from a match against the Rockets (and even that’s in the friendly confines of the ACC and might not feature Yao Ming) Toronto’s toughest competition appears to be tomorrow night’s match against the Cavs or the March 23 match against Denver (again, at the ACC.) Other than that Toronto plays:

and the Wizards (who Toronto has had their way with) twice.

Therefore I’m really looking forward to a strong push by Toronto to cement themselves in the top of the East’s standings.

And that starts tonight against Milwaukee.

Unfortunately Toronto will be missing the NBA’s Eastern Conference rookie of the month for its next two matches. As pointed out by our readers on the site late yesterday, Andrea will be returning to Italy to deal with what is being reported as a family illness which should keep him out until next Tuesday’s game versus the Wizards.

This is extremely unfortunate for Toronto as Bargnani has been a huge factor in Toronto’s last few wins, especially since Chris Bosh hasn’t been as effective as usual. Bargnani has been getting better and better with each passing month and is showing those qualities that made him the number one draft choice last summer. In fact, the good folks at DraftExpress.com take this a step further and look at the "it" factor behind Il Mago’s success.

Against the Bucks tonight therefore, Toronto’s going to have to get another big lift from their bench. The Bucks are starting to get healthy and have won two in a row. Without Anthony Parker to chase Michael Redd around, the Raptors will need Mo Pete to play like he did Wednesday night against Tracy McGrady. They’ll also need him to help out with the scoring load in Bargnani’s absence.

While the Bucks have only won 21 games, I think tonight’s match will be a tightly-fought contest. I actually expected Milwaukee to challenge for one of the last three spots in this year’s playoffs had it not been for all their injuries and with scorers like Redd, Bell and former Rap Villanueva off the bench, this team can put up points in a hurry. Therefore in terms of our standard three keys, I think the Raptors need to get great play from their bench, dictate the tempo and most importantly, get a monster game out of Chris Bosh.

In a recent chat with ESPN’s David Thorpe, he was asked who he’d select to build an NBA team around: Dwight Howard, Amare Stoudemire, Greg Oden, or Chris Bosh. His answer – Chris Bosh, simply because of Amare’s knee. It’s this franchise player that Toronto needs to see tonight against Milwaukee. Neither Skinner nor Bogut can guard CB4 mano-a-mano and if Bosh can establish himself early, it should open things up for his team-mates.

Bosh also needs to get after it on the glass, as do the rest of his front-court mates. The Bucks have some solid rebounders and I think it will be crucial for Toronto to control the boards in effort to dictate the tempo. Offensive rebounds will lead to open looks for the likes of Micheal Redd and Mo Williams and Toronto needs to ensure that don’t play into Milwaukee coach Terry Stotts’ game-plan. The Bucks like to play small ball at times and push the tempo using their speed and outside shooting and Toronto should be able to match up with this and force their own agenda. This means that a line-up of Bosh at center with Joey Graham at the 4, Mo Pete at the 3, Juan Dixon at the 2 and either TJ Ford or Jose Calderon at the 1 is not out of the question this evening.

And of course that speaks to our third key – the bench. Juan Dixon looks more comfortable than expected in a Raptors’ uni this early and Toronto will definitely need a repeat performance of Wednesday night from both he and Kris Humphries in order to grab this win. Joey Graham will likely see a healthy dose of playing time in the absence of Andrea as well and who knows, could we have a Slokar sighting prior to 30 seconds remaining in a game? Slokar’s game is similar to that of Andrea’s in many respects and tonight might be a good time to see just how deep this team really is.

UPDATE – 12:20 PM – Ok, so I guess we won’t get to see Slokar after all. It looks like Bargnani will be playing tonight against the Bucks after his flight plans were altered due to the beautiful local weather we’ve been experiencing the past few days.

Thanks to Papa for the update and this should be a huge boost for the Raptors this evening. While it doesn’t completely change the keys to tonight’s game, it does mean that Sam Mitchell has more options off the bench, especially offensively. Here’s hoping that Il Mago can set aside whatever issues he’s dealing with for tonight and we wish him a speedy trip back to Italy to see his family afterwards.