Share All sharing options for: Tip-In: Lost in New York 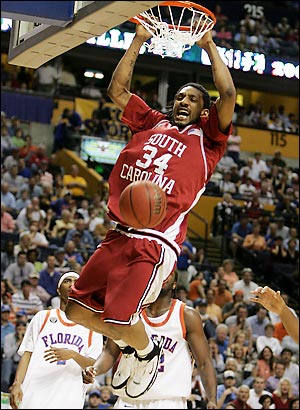 Can I get even a miniscule portion of Isiah Thomas’ salary?

I’m entitled to it aren’t I?

Because it was the exact things I mentioned on Thursday’s Raps-Knicks "Tip-in" that Isiah changed in today’s game that helped to lead New York in a 92-74 lambasting of the Raps.

Last time these teams met I couldn’t understand for the life of me why Thomas wasn’t using Renaldo Balkman more against Toronto considering the problems the Raptors have with athletic 4’s. And Thomas unfortunately listened as Balkman played 33 minutes and racked up 15 points and 12 rebounds.

On top of this, seeing the ineffectiveness of Eddy Curry early on, Thomas went small and let Channing Frye operate at will as Toronto was helpless against the Knicks’ ball movement and inside/outside game. And to top it off, when Toronto did make good defensive plays, the Knicks still dropped in impossible shots totally deflating the club.

After witnessing the single best day of college basketball ever yesterday, to view the performance by Toronto today was appalling to say the least.

The Raptors performed like a JuCo team, especially in the second half and allowed New York to get whatever they wanted offensively. In fact Toronto had only 13 points in the decisive third quarter yet allowed New York to shoot 68 per cent ending the game before the fourth quarter had started.

At fault? I'm not sure you can exclude anyone.

-Juan Dixon - three for 11 shooting wasn’t my main issue - it was the fact that Dixon took only one less shot than Bosh in 14 less minutes and had three turnovers and four fouls (many of them absolutely needless.)

-Andrea Bargnani - made too much of his "Magician" nickname and essentially pulled a disappearing act.

-Rasho Nesterovic - without Eddie Curry getting much playing time Rasho was rendered ineffective and limited to nine minutes.

-Morris Peterson - please report to Dave Hopla. Yes he’s still my favourite player, but no more excuses, there’s a reason you wouldn’t have seen minutes today Mo if this game had stayed close, zero for eight from the field for zero points in addition to zero attempts to get to the line or play defence.

-TJ Ford - from his best game of the season on Wednesday to his worst today. SEVEN TURNOVERS to only three assists, way too many contested jump shots and an effort that had me begging to see Darrick Martin since Jose was a no go again.

Raptor fans did see the return of Anthony Parker but he hardly looked like himself playing only 16 minutes, grabbing only one rebound and missing all four of his shots.

So was it his ineffectiveness and the absence of Calderon that made the difference? How can you explain a team that’s won eight of its last 15 games by a margin of 12.4 points yet lost the other seven by 15? It seems like this club since the All-Star break either comes with maximum focus or none at all.

I’m sure some of this comes down to youth and inexperience but more and more I’m noticing two things with this club:

1) If Toronto doesn’t get a complete effort from its seven main players, it’s really hard for this team to have success. This does not mean that the Raptors need seven players in double figures scoring to win, it just means that its core group all has to contribute in some manner be it on the offensive or defensive end. Today Chris Bosh put up close to his usual numbers but just didn’t demand the ball and attempt to dominate the way he can. And besides Kris Humphries, who had nine rebounds and five points in only five minutes, CB4 really didn’t get any help from his team-mates.

2) Secondly, point guard play. Without Jose Calderon, Toronto needs to get great play from TJ Ford. When Ford’s darting into the lanes, feeding his team-mates, creating havoc with his speed and hitting his mid-range floaters without forcing them, the Raps follow suit and the game just gets easy for them. Wednesday night was a perfect example of this as the Raptors were getting almost any shot they wanted offensively as a result of Ford’s handy-work. The problem is when TJ starts trying to do too much and takes on more of a scoring role. Today unfortunately was an example of this as from the tip-off Ford was looking for his own offence far too often and as a result none of the other Raptors got involved. I’m not sure if anyone else noticed this but it wasn’t until the second quarter when I realized that Andrea Bargnani was even in the game! It was the TJ Ford show and besides forced jumpers and turnovers, there wasn’t much else to see.

A week or so ago when the Raptors had lost three in a row, I wrote a rather scathing piece on some of the issues I saw concerning the club. It wasn’t meant to be a doom and gloom piece regardless of what some readers thought, but rather a cautionary tale considering some of the things I was seeing. In Toronto’s last two blowout losses I’ve seen these same issues and I maintain that in order for Toronto to secure a solid spot in the playoffs and hope to advance, they need to be addressed.

I’m sure the New York nightlife was particularly enticing last night but I don’t think this was the reason for Toronto’s dismal performance. The team didn’t look a step slow today or tired - they just didn’t look ready to play. Some of this is going to fall on Sam Mitchell but I’m not sure it’s going to be warranted. He wasn’t the one making the on-court decisions resulting in 18 turnovers through the first three quarters! The Raptors need to realize that Miami is coming on very strong, Chicago and Washington are hanging around, the Nets are finally healthy and therefore the Raptors can ill afford to continue to waltz through these games by not coming to the arena prepared.

Mitchell’s post-game words echo as much:

"I can't point to one guy that did what he was supposed to do today," Toronto coach Sam Mitchell said. "It was just a bad team game all the way around.

The problem is that there’s been far too many of these lately...and there are still plenty of games to be played.