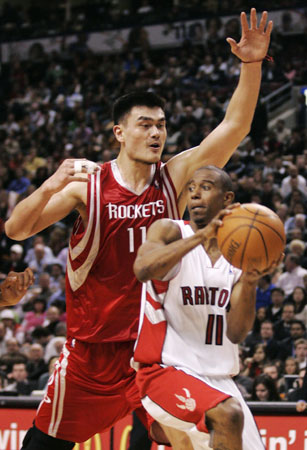 -No, I'm still not over Duke's close loss, especially considering that was of course the closest game of the tourney so far.

-And no, I'm definitely not going to start cheering for North Carolina.

However I am back in full Raptor-watch now.

After last night’s 114-100 Rockets’ win over the Raptors, coach Sam Mitchell gave his usual post-loss disertation concerning the fact that the opposing team "made shots."

And besides allowing Houston to shoot almost 50 per cent from the field, Toronto also had issues on the glass once again as the Rockets grabbed 47 rebounds to Toronto’s 33.

The Dynos looked a step slow all night and unlike their previous meeting in Houston, the Rockets made the Raptors pay by burying their open looks, particularly from long-range where they hit on 10 of 37.

The Raptors in contrast took only nine 3’s and made just two of these. Juan Dixon led the Raptors with 17 points but struggled to contain Tracy McGrady 24 points and more importantly, seven assists as he continually found open team-mates. In fact last night’s game could have carried the sub-title "Revenge of the Raptors" as Rafer Alston had 23 points and was only two rebounds and one assist away from a triple-double.

But it was Alston’s three-point shooting in particular that killed Toronto as he went five for eight from downtown and everytime the Raps made a run and closed the gap on the scoreboard, Alston would bag one to kill any momentum Toronto was gathering.

And let’s not forget about Yao Ming.

The Great Wall of China in my opinion was the difference between a close-fought game and last night’s blow-out. Ming had 23 points and 12 rebounds besting Chris Bosh (who had 16 and 19) in the battle of the "bigs" and simply changed the game. His size and ability to get position almost at will resulted in easy looks for Houston both inside and out. And on the defensive end, while Ming only had one recorded block, I can’t count the number of others he altered. The game’s last few sequences serve as a perfect example as TJ Ford turned the ball over on two straight occasions as he drove to the net and, being intimidated by Ming’s presence, tried to kick the ball back out - to no one.

We’ve discussed Toronto’s two main needs come this off-season (an athletic slasher and a rebounder/shot blocker) and as these games go on, I’m leaning towards addressing the latter first. Watching Ming last night I couldn’t help but notice just how big of an impact someone like him has on a game. Teams literally need to change their game plan against Houston because of Yao, more so than against McGrady at this point in his career I’d argue. Now a Yao Ming comes along once in a blue-moon and I realize that it’s highly unlikely Toronto can land someone with this sort of impact in the off-season (although who knows with B.C.) but unless Pape Sow suddenly gets minutes and turns into a young Mutumbo, the Raptors need to get shopping this off-season for someone in this regard.

(Later this weekend we’ll be updating our prospects list based on who we’ve seen so far in the NCAA tournament and instead of ranking everyone else’s top five, we’ll look at five players who Colangelo may be able to snatch late in the first round via trade or with the Raptors’ second-round pick. Expect to see some rebounding and shot blocking reflected in these selections...)

The interesting thing about last night’s loss however is that it should prepare Toronto for tomorrow’s noon tilt against the Knicks in NY. Toronto dealt with Eddy Curry earlier this week and although struggled against Yao, hopefully will have learned from last night’s loss to do an even better job against Curry tomorrow.

With Anthony Parker a question after not playing last night and Jose Calderon still day-to-day, Toronto’s going to need to get a much better defensive performance from the likes of Juan Dixon and Morris Peterson than last night to ensure that any doubles on Curry don’t result in wide-open looks for the Knicks on the perimeter and a win for Isiah and crew.