Tip-In: Up Close and Personal

Share All sharing options for: Tip-In: Up Close and Personal 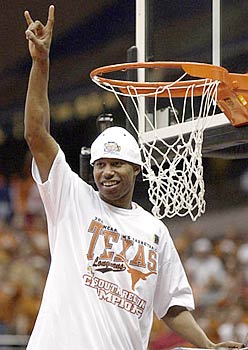 Last month I attended an engagement party which featured some of the best door prizes I’ve ever seen.

It was one of those "Jack and Jill" affairs common nowadays where the bride and groom throw a party in hopes of raising some money to help offset the costs of the wedding.

The prizes in question you ask?

How about a spa package, a digital camera, a Nintendo Wii, an Ipod Nano and platinum tickets to last night’s Raptors/Knicks tilt!

Well my friends, out of the 60 or so people in attendance, you’ll never guess who won the Raptors’ tickets...

I’d been up close for games before but these tickets provided a vantage point to which I had never been exposed. Not only did I feel like I was almost in the action, but I also was privy to certain elements of the game to which you can only experience when you’re seated that close:

-Rasho Nesterovic making remarks that had Eddy Curry giggling like a school-girl who weighed about 200 pounds less?

-Sam Mitchell going right over to Jorge Garbajosa after Garbs bagged a key three-pointer in order to encourage him to step into his shot and shoot with confidence?

-Channing Frye setting a pick on his own player causing Steve Francis to get up and glare at the sophomore before giving him a tap on the side of the head?

-Darrick Martin instructing Juan Dixon on how to break the Knicks’ press when Dixon was forced to play back-up point in the third quarter?

-Jack Armstrong taking a swig from his water bottle only to stare at it with an "I wish this was a Guiness" type of look?

Yes, I’m not sure how I can go back to sitting in any other seats! (And a big thank you to Lou and his bride-to-be for causing this "problem.")

For a sold-out ACC, last night’s game offered a solid 104-94 win over the Knicks, putting Toronto a full six games up on the Nets and six and a half on the Knicks for top spot in the Atlantic.

Much of this win came down to two things; three-point shooting and TJ Ford.

I’ll start with Ford who was simply amazing last night. He racked up 18 ASSISTS in the Raptors’ win and did a great job of getting to the free-throw line where he was nine of nine.

Not only that, seated so close I began to see why at times it looks like Ford is pulling a Mike James. A few times last night Ford was forced to dribble the clock down to about five or six seconds and then frantically try to create something simply because the Knicks were denying Chris Bosh. Bosh finished with 22 points and eight rebounds but the Knicks did an excellent job double-teaming him and keeping him in check the first half. When this occurs, it really limits Ford’s options. Garbajosa isn’t someone who can create off the dribble and unless Anthony Parker is coming off a screen or back-door cut, he’s not likely to be a great option late in the clock either. This leaves Rasho and while he can sometimes hit that baseline jumper or hook shot, it’s better to establish him early in the shot-clock.

As a result, Ford has to try to get to the rim or draw in enough people for an open kick-out and at times this means Ford has to force the issue.

This is a perfect segue-way to the second factor in last night’s win – Toronto’s three-point shooting.

The Raptors shot an incredible 60 per cent from beyond the arc going 12 of 20 and this completely changed the way the game was being played. Early on, Isiah Thomas had the Knicks doubling CB4 and preventing him from getting easy looks. This slowed Toronto’s offence to a crawl, particularly in the second quarter however the Raptors were able to keep the game reasonably close with their three-point barrage. As Toronto kept their hot shooting up in the third quarter, the Knicks were forced to abandon the hard doubles on Bosh in order to do a better job on the perimeter and this allowed CB4 to go to work as well. And when Toronto started hitting from inside and out, that was it for New York.

However as Toronto bombed-away from beyond the arc, it got me thinking about the Raptors’ playoff chances and I think that in order to be successful, the Raptors’ long-range shooting is going to be key. The Raptors lack any sort of "off-the-dribble, get to the basket" type athlete besides maybe Joey Graham and therefore if Bosh is being rendered ineffective offensively, Toronto’s going to have to depend mostly on its jump-shooting capabilities much like they did last night. Teams are starting to double-up on Bosh recently or guard him with a physical big to take him out of his element. When that happens, Toronto is going to struggle to score unless other players like Garbajosa, Parker and Bargnani hit shots. Last night all three were raining them down (especially Garbs who had a career high 20 points) and when that happens, this team is going to be tough to beat.

One of our readers yesterday stated that I shouldn’t give up on Jorge yet as he would play a big part in Toronto’s playoff success and I couldn’t agree more. I hadn’t given up on him as a whole, I just didn’t want him taking so many long-range shots! However last night he made them and if he can continue to do this, he really is the team’s X factor. The line-up of Ford, Parker, Garbajosa, Bosh and Bargs gave the Knicks fits last night as besides Ford, the rest of the Raptors could step-out and hit shots from long-range and New York just couldn’t get out in time. Bargnani did exactly what I mentioned in yesterday’s pre-game hitting on four of his six three-point attempts as Eddy Curry just didn’t want to chase him around the perimeter thus drawing the wrath of Isiah Thomas.

And speaking of Thomas, he needs to take a good luck at the game-tape from this loss as he was completely out-coached by Sam Mitchell. (Yes, you read that right.) The Knicks started strong going to Eddy Curry as much as possible yet for some reason got away from this as the game went on. Curry even went as far as to say after the game that:

"It’s tough because from my point of view it seems that I’m open a lot..."

Indeed he was, however Steve Francis and Stephon Marbury time and time again in the second half elected to go one on five. In addition, near the game’s conclusion, the Knicks scored on two straight occasions by posting Marbury up on the smaller TJ Ford and running the offence through him. I expected to see this much earlier in the game and couldn’t believe the Knicks only turned to this manoeuvre when it was "too little too late."

And finally, why did Isiah play Chris...uh...I mean Jared Jefferies so much? Two points and five rebounds in 40 minutes of action? Are you joking? Renaldo Balkman had six points and five boards in only 15 and was killing Toronto on the offensive glass! If Thomas had watched any game tape of Toronto’s last few matches he would have seen what a problem athletic rebounders like Chris Wilcox and Anderson Varejao have been so why wouldn’t he have stuck with a line-up of Curry, Malik Rose, Balkman, Francis and Marbury? Instead, he stubbornly kept Jefferies in only to see TJ Ford race past him time and time again.

Unfortunately last night’s win was not without some cost. Jose Calderon injured his ankle on a drive to the basket in the second quarter and did not return. There’s no word on how severe the injury is, but Darrick Martin will probably have to get out of his street clothes to backup TJ after seeing Juan Dixon attempt to serve as the back-up last night. Anthony Parker re-injured his ankle again as well however did somehow return to play most of the game’s final minutes. Here’s hoping that he gets enough rest today before chasing Tracy McGrady around tomorrow night when Houston comes to town. The Raptors face the Rockets Friday night before travelling to New York on Sunday for a rematch of last night’s contest. I’m not going to say either is a must-win game, (solid point by one of our readers on the word’s over-use) and in all probability won’t come close to duplicating last night’s Dallas/Phoenix classic, however it would great to see Toronto keep pace with Washington and Chicago in effort to jump into third place overall in the East come playoff-time.

I wonder if I can get last night’s seats for the playoffs...