Share All sharing options for: Game-Day Preview - Raptors vs. Knicks 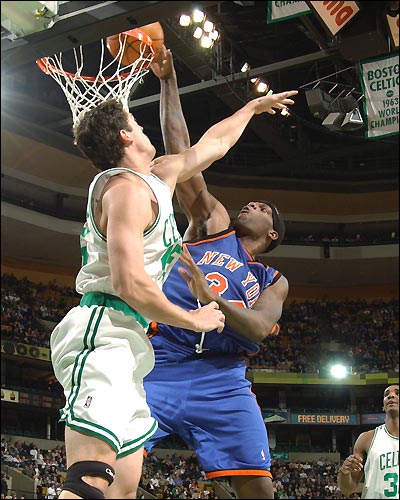 Yep, it sure was hard to see this one coming.

After speculating that the local press would re-ignite the "Mo Pete playing time issues" talk since the arrival of Juan Dixon, both the Toronto Sun and Star ran articles yesterday suggesting that Mo may want out at season’s end.

And frankly whether this is the case or not hardly matters as right now the Raptors need Peterson to be at the top of his game and the team can’t look further ahead then their next match, which tonight, is against the New York Knicks.

The Knicks are the league’s only team to have improved their winning percentage in each month of the season and are firmly in the race for one of the final two playoff spots in the East thanks to the recent slides by Orlando and Indiana. Considering New York won all of 23 games last season, this is something for Knicks’ fans to cheer about and earlier this week their much-maligned coach and president Isiah Thomas was rewarded for the team’s "success" by being granted an extension.

While New York is five and a half games back of Toronto for top spot in the Atlantic, the two teams play each other three times in the season’s final few weeks and therefore each of these matches, for the first time in years, will have playoff implications.

So let’s look at these two clubs statistically as both Toronto and New York are quite evenly matched in some categories. Both clubs average about 99.5 points per game offensively, shoot about 46 per cent from the field, and hold opponents to about the same percentage on the defensive end.

However the comparisons stop there.

The Knicks are not as good a team defensively allowing opponents to score on average over 101 points per game. They’ve especially struggled this year guarding perimeter shooters which plays directly into Toronto’s favour this evening and is my first key point to tonight’s contest. While New York has some able "bigs" on the interior, players like Andrea Bargnani and even Bosh should present real problems due to their ability to hit the outside shot. Can you see Eddy Curry chasing Il Mago around on the perimeter this evening? Neither can I. Therefore I’m hoping that Sam Mitchell and co. impress upon TJ Ford and Jose Calderon the importance of the "draw and kick" in effort to free up Toronto’s long-range bombers, from Bosh and Bargnani to Mo Pete and Anthony Parker. (Notice I didn’t name Jorge Garbajosa in there?)

On the flipside, while the Knicks haven’t done a great job this year stopping their opponents’ offensive schemes, they have been a force on the glass. The Knicks are the fourth best rebounding team in the league grabbing on average 43.6 boards a game while Toronto sits dead last with 38.9. Hmmm...I wonder what key number two could be? Yes, the Raptors must keep the Knicks off the glass and there’s no reason Toronto shouldn’t be able to do this. The Knicks’ jumping jack and leading rebounder David Lee is still out with an ankle injury (which as an aside is wreaking havoc for me in one of my fantasy leagues) and while Eddy Curry is a wide load, he’s hardly a rebounding force. It’s the likes of Renaldo Blackman, Jared Jeffries and Steve Francis, even on bad knees, that concern me as all can rebound well at their respective positions.

The final stat that bears taking a glimpse revolves around the free-throw line. While New York does not shoot a great percentage from the line, it gets there on average 30 times a game while Toronto, only 23.5. In fact, the Knicks are second to only the Utah Jazz in this category mostly due to the inside presence of Eddy Curry and the penetration skills of Stephon Marbury, Jamal Crawford and even Nate Robinson. Toronto’s catching another break here as Crawford is done for the season but once again, the Raptors will have to do a number on Curry to keep him from getting easy baskets and fouls in close. That task will likely fall on Rasho Nesterovic but I expect to see Andrea Bargnani getting some time at this spot as well in hopes of creating a mismatch on the other end of the court.

In my books, this is a must-win game for Toronto. If the Raptors can come out and set the tone early en route to a dominant win, it should have implications for the teams’ next two meetings.

And if that occurs, perhaps Glenn Grunwald will be reconsidering his move to Gotham City...