Share All sharing options for: Tip-In: Taking Care of Business 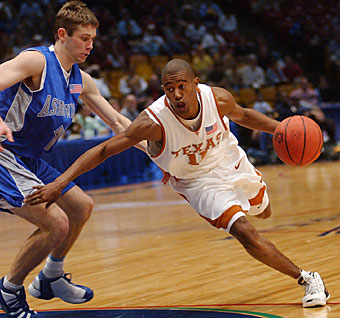 TJ Ford has felt my wrath a few times this season on the site. His decisions to head to the rim instead of running plays out of timeouts have left many of our readers aghast as well.

However Ford’s scoring saved the Raptors in OT against the Sonics on Sunday and last night, TJ played maybe his best game of the season as Toronto beat up on Milwaukee 108-93.

Ford finished with 19 points, nine assists and three steals but his numbers hardly tell the real story. TJ set the tone early in this game scoring off the dribble and finding his team-mates to rack up six assists in the first quarter!

And I’d like to add that while Ford did take a number of jump shots, they were the type I want him to be taking. Just like Calderon needed to develop that aspect of his game to make his penetration that much more lethal, TJ needs to do the same thing and if he can hit that mid-range shot with ease, it’s going to be very tough to stop him off the dribble.

On top of this, his penetration changes Toronto’s offense.

When Rasho starts getting easy looks because TJ’s darting through the paint, you know that the Raptors’ offense is running in peak form as everyone is getting involved. It thus makes it very tough to defend Toronto as teams are forced to play a reactive defensive style (running to get to spots on rotations) as opposed to a proactive one, leaving Chris Bosh free to operated inside and out and the likes of Anthony Parker open in the corners to bomb away.

In essence, it’s the best-case scenario for this team.

And you could see this extend to Toronto’s bench last night. Juan Dixon, Mo Pete and Andrea Bargnani all got easy looks thanks to the penetration of Ford and later, Jose Calderon and while the Bucks did close the game to within single digits on a few occasions, Toronto’s offence was simply too much Milwaukee.

Commentator Jack Armstrong made the point that the Bucks looked to be suffering from a post-Cavs hangover and I would have to agree. Milwaukee played with little energy, especially on the defensive end, and turned the ball over 20 times resulting in 25 Raptor points. Toronto seemed to be honed in on getting the win and it really looks like the team is starting to prepare itself mentally for the playoffs thus treating some of these "should win" games as part of simply taking care of business.

But aside from TJ’s play and Toronto’s offensive efficiency there were two other things that I was most happy with last night; Toronto’s work on the glass, and the play of Morris Peterson.

After being killed in the rebounding department by Seattle on Sunday, Toronto put in a solid performance against Milwaukee out-rebounding the Bucks 39 to 34. The entire team seemed much more focused on coming up with loose balls and in particular, I felt that Mo Pete led the charge by grabbing some key rebounds in traffic early in the game.

In fact watching Peterson defend and rebound the ball last night, (not to mention pitch in a couple huge 3’s) reignited my belief that he would have been a better option than Juan Dixon in the fourth quarter of Sunday’s OT win.

After the game when asked about Dixon, (who had another solid offensive game with 10 points) Mitchell ignored Juan’s offensive production saying that he "liked Dixon for his defence."

And while I do think that Juan does a good job of trying to stay in front of his man and use his quickness, I just worry that Sam’s infatuation with Juan is going to come back and bite Toronto, especially in the playoffs. Don’t get me wrong, I’ve been incredibly content with Dixon’s scoring and clutch shooting off the bench, but do I really want to see him guarding Lebron James or Quentin Richardson?