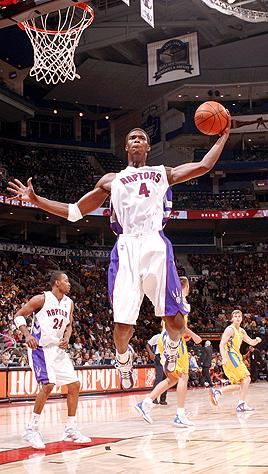 Were the Raptors watching the MAC final this weekend?

It wasn’t quite Doug Penno’s three-point bank off the glass, but Toronto did pull one out of thin air in a 120-119 over-time victory over the Seattle Sonics yesterday afternoon.

No, this one wasn’t a blow-out in comparison to the recent games Toronto has played...but perhaps it should have been.

The Raptors were crushed on the boards 52 to 34, and for all magic of Bargnani and sheer determination of Chris Bosh, almost blew Anthony Parker’s return to action thanks to their inability to prevent second opportunities for Seattle.

Now before we go any further into this recap, I suppose there’s really two ways in which you could look at this game:

1) Toronto’s mental errors and lack of effort on the glass made this game a lot closer than it should have been (especially considering the Raptors shot nearly 56 per cent from the field and got to the free throw line 32 times hitting on 24 of these) and while they won, Toronto didn’t really deserve to win this game.

2) Toronto didn’t play that well defensively and certainly didn’t rebound the ball as they needed to however unlike past incarnations of the Raptors didn’t quit, and simply made key plays when it matter most to squeeze out the win.

Call it the pessimistic versus the optimistic argument if you will...and I’m not really sure what side I’m on.

As happy as I was with Chris Bosh’s return to dominance in his best game since the All-Star break, I was equally angered by needless turnovers, poor decisions, and of course, Toronto’s complete inability to rebound the ball under their own basket. Seattle had 17 OFFENSIVE REBOUNDS and watching the likes of Wilcox, Petro and Rashard Lewis grab rebounds for put-backs and second attempts was akin to being repeatedly punched in the gut. Howland and I, along with two of our HQ readers Matt and Andrew watched in horror as the Raptors squandered perhaps their best game offensively since Houston by allowing Seattle to score almost 30 second chance points!

And therefore as overjoyed as I was with the game’s conclusion, Toronto can not continue to make these type of errors come playoff time unless they want to be swept.

In fact forget playoffs, if the Raptors want to win games like tonight’s against the Bucks, they’ve got to start hitting the glass now. Toronto doesn’t have an Andrew Bogut or Brian Skinner, but players like Rasho Nesterovic and Jorge Garbajosa need to do a much better job of simply getting position on their men if not grabbing rebounds. Nesterovic had only four boards yesterday afternoon, the same as TJ Ford, and Garbajosa had only one rebound while playing defense much the same way a pylon occupies space on the 401.

But I’m not going to rant and rave solely against Toronto’s inadequacies, Sam Mitchell, the man who we’ve spent the last few days discussing on the site, shares in this blame as well thanks to his newfound Bonneresque relationship with Juan Dixon.

A quick flashback if you will.

Yesterday afternoon the Raptors climb back in the fourth quarter to get within striking distance of the lead. However each time Toronto gets a basket, Seattle comes right back with Ray Allen to even the scales. Guarding Allen was none other than Dixon.

I COULDN’T UNDERSTAND THIS!

Yes Dixon was playing fairly well offensively, but why was Mitchell giving him minutes in the fourth quarter when Toronto was trying to get stops? With Anthony Parker hounding Rashard Lewis (thanks to the ineffectiveness of Jorge Garbajosa) Dixon was left to guard Allen and Mr. Shuttleworth commenced the torching. Allen simply rose up and shot over the much smaller Dixon on back to back possessions and when Seattle forced Toronto to switch, this simply resulted in Dixon fouling Rashard Lewis on a three-point attempt negating a previous Andrea Bargnani three.

While Dixon did hit a huge three-pointer for Toronto in the game’s dying moments, he also missed two key rebounding opportunities and I had to wonder if Toronto would have needed his three had Morris Peterson been in the game. Sure Mo hasn’t been on top of his game offensively of late, but wouldn’t he have been a much better defensive option than Dixon? Peterson’s had success in guarding Allen in the past and has the size to be a much better option in terms of rebounding the basketball, something Toronto seemed unable to do.

Now don’t mistake this for an anti-Juan Dixon thread, Juan has played exceptionally well overall since his acquisition. However in a game that should never have gotten to over-time, I was left scratching my head as to why Peterson played only eight minutes and now will surely be the main topic amongst local media.

"Mo, talk to us about why you think you only played eight minutes last night..."

I can hear it now.

That’s why I’m especially curious to see how Mitchell doles out his minutes tonight against the Bucks.

Last time these teams met Toronto struggled offensively and while Juan Dixon was one of the bright spots, I’m hoping that Mitchell uses Peterson along with Parker (who as an aside looked like he hardly missed a beat yesterday) against the likes of Redd and Patterson. Milwaukee has played much better of late and tonight’s game should be a hard fought contest.

However if Toronto can execute offensively like they have in their past few games and do a better job on the glass, a W should be within reach...especially if they get a repeat performance of yesterday afternoon’s heroics from TJ Ford (who was clutch in OT) and Chris Bosh.

CB4 had 27 points, 10 rebounds, three assists, three steals and two blocks however none of these stats really do his performance justice.

No, it was Bosh’s spectacular end-to-end montage that really set the tone for the rest of the game as CB4 went around the back for a lay-up at one end and charged back to reject the Sonics’ field-goal attempt at the other.

This was perhaps the best sequence from a single player that I’ve seen all year (right up there with a similar sequence from the Hawks’ Josh Smith) and one that will be showing on highlight reels for the remainder of the season I imagine.

But with the recent success of Miami, (who beat Washington last night in one of the most bizarre finishes I’ve ever seen) New York and even Philly, I’m less concerned with the highlight packages, and more concerned with the upcoming schedule and the wins Toronto needs to ensure a solid birth in the playoffs.