Share All sharing options for: Tip-In: Respect the Architect 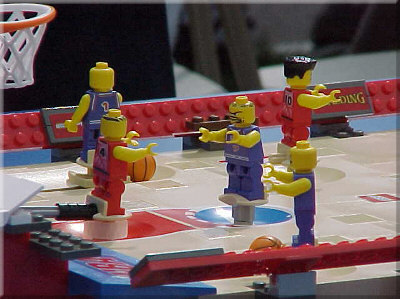 Was Bryan Colangelo a Lego Master when he was a kid?

I mean, I thought after building the original YELLOW Lego Castle, I had some serious skills.

Chris Bosh wasn't even required in last night’s 106 to 90 win over the Rockets and it was some of the "spare parts" that Colangelo has acquired that did most of the damage.

Juan Dixon and Kris Humphries combined for 27 points, eight rebounds and four assists as Toronto’s bench outscored that of their opponents 61 to 32. And besides some moments late in the third quarter and early in the fourth, this game never seemed to be in question.

But let’s get back to B.C. for a second.

Currently the Raptors are only percentage points behind the Wizards for third spot in the Eastern Conference. Seeing this last night made me do a complete double-take! I mean, this is the same squad that won 27 games last year!

And then again that’s just it, it’s not the same squad. Lego Master Colangelo found the perfect pieces to put together a cohesive group where after Chris Bosh, almost everyone is as important to the team’s success as everyone else. If Colangelo doesn’t win his second Executive of the Year award

I mean, Juan Dixon looks like he's been with the team for the whole season!

And Kris Humphries looks like he normally gets 20 minutes a game!

Top this off with the fact that Andrea Bargnani is looking more and more unstoppable with each passing game and there’s no doubt in my mind that B.C. deserves a second Exec award on his mantle at the season’s conclusion.

But praise for B.C. aside, let’s take a closer look at last night’s win…because Jeff Van Gundy should be looking at video from the game right about now, and tearing out what little hair he has left.

The Raptors’ ball movement was superb in the first half and Toronto seemed to be able to get whatever it wanted offensively.

However in the third quarter the Rockets tightened the screws and at one point cut the lead from 20 to nine. I thought the real reason for this was that Chris Bosh wasn’t being aggressive enough. When he did catch the ball, the Rockets were forcing him out on the perimeter and he started settling for jump shots. And as a result, there was no inside presence for Toronto and the Raptors started making like Houston and settling for jumpers. TJ Ford then started over dribbling to find the perfect pass and this resulted in too many late shot-clock heaves. Ford did make one of these, a 3-pointer in the grill of Rafer Alston, but it was still not what I’d call a "good shot."

To make matters worse, the first unit then started making one pass too many to combat the jump-shooting and this resulted in turnovers and a Rockets run which had me yelling at my TV for Sam to bring in the bench.

Mitchell did bring in some fresh legs and with Calderon at the helm and Bargnani draining shots from inside and out, Toronto returned to its first-half rhythm and never looked back.

For Van Gundy, the frustrating thing must have been that his team could have made this thing a lot closer. But ala Raptors circa 2003, the team was quite content to simply shoot jump shots all night long. And the proof is in the pudding as Houston shot only SEVEN free throws!

And while Houston’s offence was horrible, some of the credit for this has to go to the Raptors. Minus their best defender in Anthony Parker, Toronto stepped things up and even when the Rockets made their run, (which you knew would happen) the team didn’t panic and kept forcing Houston to take tough shots. Mo Pete only scored five points in his starting role, but he hounded McGrady and forced the Rockets’ top gun to take 20 shots to get his 22 points. And Toronto made a team commitment to rebounding, especially in the fourth quarter, to best their foes in that department as well.

Last night’s win means that Toronto closed out the month of February with a 12 and three record and their only three losses were to San Antonio, Detroit and Cleveland (a one point loss in a game they should have won.)

York of course has been the subject of a number of our tirades here at the HQ but his latest piece takes the cake.

In it, York chastises the loyal Raptor fan base for exaggerating the team’s success and even quotes ESPN.com’s Marc Stein to back this up. One problem though Marty, where did you find this quote?

As an avid reader of ESPN.com and an "Insider" subscription holder, I searched far and wide yesterday to find Stein’s quote but to no avail. Can anyone else out there let me know if they find something? I mean, is it possible York made it up? He’s of course fabricated tons of rumours (including the ridiculous notion that Vince may consider returning to Toronto next year) but to make up a quote?

And even if that quote is buried somewhere, I guess he chose to disregard quotes such as these from Stein’s past few Power Rankings:

We repeat: Raps don't hold the East's No. 4 seed just because they're leading the Titanic. They're No. 4 because they actually have the fourth-best record in the East.

What ever happened to research? I mean, I still don’t even understand why the Metro News has this guy on staff?! Isn’t that the same as the Walrus having a "Page 3 Girls" section? Do we need to get Stein on the HQ to clear the air?

But let’s move away now from the Midnight Star type of column and shift focus to a great piece on Andrea Bargnani done by Chris Broussard, appearing in the latest ESPN The Magazine. Broussard’s not my favourite Sports journalist and has put out his fair share of mediocre work in the past, but this latest article is not only a good read, but as a Raptor fan I found it to be very insightful, especially concerning Bargnani’s results from the Caliper Profile. After reading it I couldn’t help but be excited not only because of the information relating to Bargnani, but also because of the thought process behind Bryan Colangelo’s selection of the Italian prospect. Colangelo’s moves have been like Midas so far, and articles like this only go that much further to reaffirm once again that with the Legomaster, the franchise is in good hands.