Share All sharing options for: Game-Day Preview - Raptors vs. Lakers 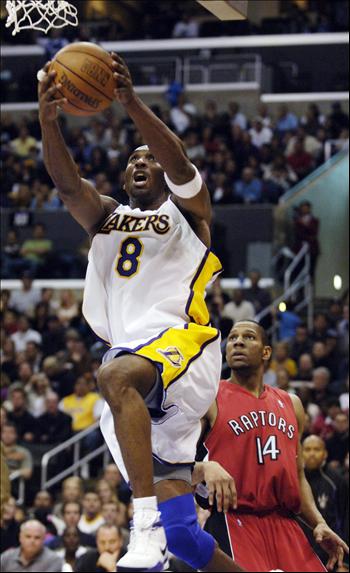 Any minute now, a sound clip of Michael Buffer is going to pop-up and you’ll hear "let’s get ready to rumbbbbbbbbbbbbbbbble!!!"

Because that’s how I feel going into this weekend.

The Raps start things off tonight with a match against the Lakers at the ACC. Interestingly Toronto then plays the Detroit Pistons tomorrow night, who last night did a number on the same Lake Show.

And as most fans know, after these two matches, Toronto then finds itself up against both the Bulls and the Nets, two more key games in terms of deciding there end-of-season fate.

But let’s start with the Lakers.

This is a very interesting team to say the least. Kobe is being mentioned as an MVP candidate, the team has surpassed most experts’ views on the club heading into this season (many thought that with a revamped New Orleans and healthy Utah, Los Angeles would find themselves like Main Source – "Looking at the Front Door" of the playoffs.) And Kobe Bryant is playing the most team-first basketball of his career while simultaneously being mentioned along with the names Nash and Nowitzki as an MVP candidate.

Kobe has always played well against Toronto (no one needs to allude to the last time he visited the ACC) and my guess is that Anthony Parker and Mo Pete will draw the defensive assignments on him. Kobe will probably still get his, but it’s not Bryant that really worries me in tonight’s match.

For a long time I thought that Jackson was overrated as a coach. I figured he was more of a great "meeting of the minds" guru, someone who could placate egos between stars and get everyone on the same page. He did that for years with the Bulls resulting in enormous success, and again he did that in the Shaq-Kobe years with the Lakers. However it’s these past two seasons that have really shown me just how good a coach Mr. Jackson is.

I mean look at his roster!

There’s no way on paper you’d think this club would be any better than Seattle, especially since Lamar Odom has been hurt for a good chunk of the season and they’ve relied heavily on rookies Andrew Bynum and Jordan Farmar.

But this has been the genius of Jackson. He’s gotten the players on this team to recognize their roles and niches and Kobe has decided to maximize each of their individual abilities by playing distributor more and more.

Brian Cook comes off the bench as a three-point specialist, open thanks to Kobe’s forays to the basket.

Maurice Evans gives the team athleticism off the bench and in summary, the Jackson has simply created a real team in LA...no, there’s not a Shaquille O’Neal (although Bynum is developing quite nicely) but this is a club that has confidence enjoys playing together from positions 1 through 15...

That’s why while most of the media is focusing in on the Bosh/Kobe match-up tonight, I’m most interested in seeing which team’s supporting cast comes out on top, and what adjustments Phil Jackson makes. Not only will this game be a great test for the Raptors, but I think it’ll also be a solid challenge for their coaching staff.

One of our readers made an excellent comment yesterday in terms of something that Toronto has recently been doing in their wins – building energy. I too have noticed that lately, when the Raptors fall behind a bit in the game, a few consecutive buckets gets them going and the whole team then starts to make a run seemingly building on the vigor associated with each successful play. Sometimes it’s a defensive stop such as taking a charge, and conversely at times it’s a key 3-pointer or put-back. But in each case you can see the team’s body language react in a positive manner and Toronto has then charged ahead to eventually win.

It’s this energy that I’m looking forward to seeing tonight. The Lakers did not look sharp last night against the Pistons and Detroit executed perfectly on the offensive end and Los Angeles had no real answer. Kobe struggled going only five of 13 from the field for 18 points and he had an ugly eight turnovers. Many of these were simply sloppy ball-handling on his behalf and I expect him to bring his "A game" tonight. However after a tough loss to Detroit last night, the travel to Toronto, and the Raptors recent confidence, the Lakers may be "ripe for the picking" so to speak and once again I’ll be looking for the Raps to jump on the Lake Show early and run them ragged.

That’s why as a final point, I think Jose Calderon and TJ Ford will play a huge part in tonight’s game. Yes Jordan Farmar has been a nice surprise at the 1 for LA...however neither he nor Smush are any match for Toronto’s tandem of Ford and Calderon with the way both have been playing recently. If Ford and Calderon start turning those corners, hitting their open J’s and getting into the paint, it’s going to be a long night for the Lakers. This is a completely winnable game and the Ford/Calderon tag-team should be a huge advantage in the Raptors favour.

Which is why it’s interesting that reading Chad Ford’s chat re-cap yesterday on ESPN.com, he mentions Toronto along with Orlando as being two teams with a "surplus" of point guards who might be open to making trades prior to the upcoming deadline.

Um...correct me if I’m wrong but since when have we had more point guards than we need? Is he advocating we play one or the other for 40 minutes a game and play Darrick Martin for the rest?

Chad Ford goes further to say that Colangelo may need to play TJ more minutes to validate his acquisition however there are those who feel that Calderon is the better player.

Woah! Don’t you just love statements like this from someone who's probably not watched an entire Raps game all year?

Look, I'm an avid reader of Chad's draft coverage, but stuff like this makes me shake my head. I think it’s a bit early to say who’s the better player, however I’m admittedly liking TJ coming off the bench for this club. He gives another gear to the speed of the offence and has a bit more of a knack for scoring than Jose. But in any event, dealing one makes little sense to me right now as together, the two-headed monster at the point has been dynamite for this team and I'm expecting them to blow up tonight against Kobe and his Lakers.