Share All sharing options for: Game-Day Preview - Raptors vs. Magic 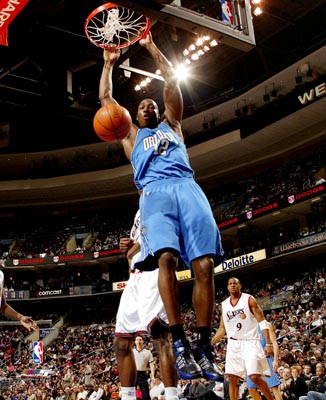 I’ve got a dilemma in my fantasy basketball league.

We play with three keepers and for money and currently sitting middle of the pack, I’m forced with making a decision as to whether I should trade one of my "keepers" and make a run for a top 3 spot...or simply fold and pack it in for this year.

The keeper in question who’s generating the most interest? – Orlando’s Goliath-esque Dwight Howard.

Howard started the year off looking like Shaq did in his second season with the Magic...double-double after double-double with some huge rebounding numbers not to mention a great field-goal percentage and two or three blocks a night throw in.

Lately however, that just hasn’t been the case.

Take last night’s performance against the severely undermanned Milwaukee Bucks. Howard did have 21 points and 11 rebounds, but only one block and only hit three of his seven free-throw attempts. In other words, yes, Shaq-esque and for the season, Howard is shooting a stomach-turning 61.7 per cent. (In other words, he could really use Dave Hopla’s help. )

And as Dwight’s performance has levelled off, so has his team’s.

The Magic have lost 10 of their last 13 games and now sit behind the Raptors in terms of winning percentage. In fact, if Orlando is not careful, they may fall out of the playoff picture completely, something that would be a major surprise considering how well this team played early in the season.

Is Grant Hill’s on and off injury situation hurting the team’s consistency?

Are there too many "cooks in the kitchen" so to speak at the point guard position?

Or is Dwight Howard indeed burnt out from having to play major minutes all summer with Team USA?

I’m going with D), none of the above.

I’m looking at another player who I think Orlando misses and who’s absence has coincided with the Magic’s resent malaise.

Ariza is no MVP candidate but early in the season he was a huge reason for this team’s success (and one of the players we coveted most here at the HQ last off-season.) He’s big enough to guard more than one position on the court, is perhaps the Magic’s most athletic player, loves to get to the rim and draw contact, and is also perhaps their best defender.

And you can see Ariza’s absence in the stat columns.

Not only is Orlando now one of the league’s worst offensive clubs (they average only 94 points per game,) but they are no longer leading the league in free-throw attempts, something they were doing earlier in the season, and I think Ariza had a big hand to play in both of these areas besides being the team’s proverbial "glue guy."

Both he and Grant Hill will be sitting tonight’s match out against the Raptors and Toronto needs to continue its recent streak of offensive efficiency to capture a winnable game.

The Magic are still one of the league’s better teams but have not shown it in the past few matches. Last night Magic coach Brian Hill called their 116-111 loss to the Bucks one of their poorest defensive performances of the year and hopefully Toronto can once again jump on their opposition early and ride out the win.

To do this the Raptors will need to get their usual stellar play from Chris Bosh. Bosh has been unreal in the past stretch of games for the Raps on both ends of the court and his "lead by example" mentality is starting to get some notice around the league at last.

In fact SI.com has taken a big liking to the Raps recently as not only have they done a nice feature on Bosh, but yesterday they went as far as saying that even if Brandon Roy is the favourite for "Rookie of the Year," the top rookie long-term appears to be Andrea Bargnani.

Toronto needs to get a big dose of Bargnani and his fellow bench-mates again tonight, especially in terms of getting to the free-throw line. (That means you Joey.) The Magic are giving up 28 free-throw attempts a game on average and considering how well Toronto shoots from the line, the Raptors need to capitalize in this area.

Defensively, look for Sam Mitchell to play Rasho Nesterovic on Dwight Howard as much as possible as the former Spur had great success limiting Howard the last time these teams met. Considering Howard’s proficiency at the line, I can live with both Rasho and perhaps Kris Humphries using as many fouls as necessary to prevent Dwight from getting easy dunks and put-backs.

I’d be surprised too to see the Raps use too much zone against the Magic, one of the league’s best 3-point shooting teams, and hopefully a series of quick rotations will prevent Orlando from getting too many open looks. At the same time however, I’d rather not see unnecessary run-outs on shooters only to leave the likes of Howard and Darko open underneath for easy dunks and lay-ups. Howard for sure has the ability to take over this game even though his offence is still in the developmental stage.

And getting back to my fantasy team, that’s why I decided in the end to hold onto him.

Howard is just going to get better and his upside is too tantalizing to trade away for anything less than another team’s keeper.

As a result I dealt Eddie Curry and Rasheed Wallace for Paul Pierce who I figured would be returning soon enough from injury...only this morning I see that Pierce now has an elbow infection that’s going to keep him out even longer...

Good thing I've got a real living and breathing team to cheer for...