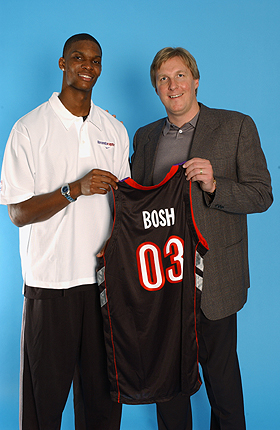 When the dust cleared from yesterday’s 122 to 110 win over the Clippers, Toronto had six players in double figures, had shot 70 per cent in the game’s first half, and were sitting at two games over .500. The team was also cheering Tyronn Lue’s buzzer-beating shot over the Nets which put Toronto three games up on the New Jersey for the Atlantic Division lead.

All of this from a Raptor fan’s perspective is terrific.

I mean, at certain points watching yesterday’s game, I found myself grinning away like an idiot for no real reason!

I also found myself wondering if this is what it’s like being a fan of the Spurs, Rockets or Lakers…just possessing a feel of invulnerability…that the guys we send out are going to give your guys a real run for their money each and every time. I mean, the Clippers are no Mavericks, but they had been putting together a real run and were one of the NBA’s hottest teams of late. The Clips played no defence whatsoever but you just felt like Toronto was going to counter every run Los Angeles made, and come away with the win.

It’s interesting but after the game, and on the way to a Super-bowl bash, my friend, another long-time Raps backer, made the comment to me that you really can’t be a fair-weather Raptors fan. He went on to say that while the Leafs are somewhat of a joke amongst those "Leaf Haters" out there, the team hasn’t been that bad. They have been in the running to make the playoffs most of the past few seasons and have even gotten through the first round on occasion. The Leafs, for all their "lack of a Stanley Cup in X number of years" talk, is a team that has a certain presence, the type that inspires hardcore fans and casual observers alike to gather Saturday evenings for the sole purpose of "watching the Leafs’ game."

But a get-together to watch the Raps?

That’s why, as my friend pointed out so immaculately, this recent stretch of Raptor success has been so rewarding. Here we have a team that’s not only been bad, but simply wretched at times, rising from the ashes like the Phoenix (now there’s a double entendre) and suddenly everyone seems to be talking about them.

This team is enjoying a true measure of success, and you can see it echo from the various articles in the local press, right down to the Raptors’ bench jumping up and exchanging chest bumps after an Andrea Bargnani dunk or a Jose Calderon slash to the basket.

Maybe Raptor fans aren’t as prevalent as Leaf fans and maybe never will be…but don’t try and tell me they aren’t as loyal if not more so. (Just look at the number of blogs dedicated to the Raptors for instance!) Because I’d argue that it’s never been "cool" to be a Raps fan and you just can’t be "fickle" in your allegiance to a team that has only made the playoffs twice in its existence and is often looked at as a second-tier franchise compared to the majority of its American counterparts.

That’s why, as I sat smiling to myself after seeing Morris Peterson drain three after three to end yesterday’s game, I decided that I absolutely hate the idea that Raptor fans shouldn’t get too excited yet about this team; that being atop the Atlantic is nothing to be proud of; or that even being within three wins of the top team in a weaker Eastern Conference isn’t a reason to jump for joy.

Because maybe if you’re a Pistons’ fan it’s not, and maybe if you have Lebron James or your team acquired Ben Wallace in the off-season it’s not either as you were expecting more.

But as a Raptor fan I know all too well that a year ago we were, for what seemed like the umpteen millionth time, staring the lottery right in the face and lamenting the continuation of the never-ending rebuilding process (Ahem…Celtics and Hawks’ fans take note) having an over .500 record was the furthest thing from my mind. So was having a team with depth from 1 through 12 that played as one and didn't have the local media dwelling on Sam Mitchell's situation.

And that’s why this year feels so good.

This has been a long-suffering fan-base with very little to get excited about and regardless of how the remaining 30 plus games play out, I’m going to enjoy every minute of it.

And I haven't been able to say that for a long time...