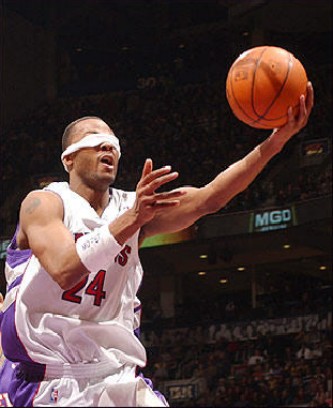 A win over the Hawks is never something to get too excited about.

Ladies and gentlemen, children of all ages, I am pleased to introduce, making its first appearance since 2004....an above .500 Toronto Raptors

That’s right folks, 47 games into the 2006-2007 season and you can now actually declare one’s fondness for Toronto’s team without being ridiculed, poked fun at, or somewhat ashamed. It really is a "New Era" for Raptors ball...although that slogan was brought out about 3 years too early.

Last night's 103-91 victory over the Atlanta Hawks was a solid win for a few reasons. The first is that the Dinos went to Atlanta knowing they could beat this team and they did just that. There was no fooling around as the Raps jumped on the Hawks team early with leads of 10 and 17 after the first and second quarters, respectively. Every guy that touched the floor contributed and it was a great team effort.

Of course Atlanta did start to make a run in the second half when Joe Johnson started getting his, but it was actually the Atlanta run that made this win even more impressive for the Raps. The reason why? The Raps looked poised throughout the whole game.

After having watched this same team on a few occasions start to crack under pressure (I am having flashbacks of turnovers during a full-court press) it was a breath of fresh air to see the team stay the course, execute their offence and put the final touches on a solid win. What this victory showed me was that despite the youth and the past few years of consistent losing, this new look Raptors team is starting to learn to do what all great teams do. They simply know how to win. All players in the NBA know that this game is a game of runs. It is the great teams however, that know how to withstand the ups and downs of a game and still consistently come out on top. Look at Phoenix for example. In almost all of their games their opponents go on some sort of run, but the team stays true to what they are trying to do, and has enough experience and know how so as not to fold under pressure. Tonight we saw those things from the Raptors. I know this sounds funny, but it’s great to see that this team is starting to learn how to win.

Speaking of Phoenix, the Raps style of play won’t be mistaken for that of the Suns anytime soon, but there is one striking similarity between the two teams that few people have discussed. They each have so much depth that as an opposing coach you cannot take the same approach with these teams as you would with say a Miami, a Cleveland, a Seattle, or even a Lakers. Let me explain. With the Heat, Cavs, Sonics and Lakers the defensive strategy is pretty basic in that you try and contain one player and force his teammates to beat you. With Toronto and Phoenix is that the case? Sure it is easy to say the key to beating the Raps is shutting down Chris Bosh, but that strategy is not so sound now that the Raps are getting production out of every position on the floor. Like Phoenix, not one guy on the Raps is going to beat you and this team is at its best when it gives a collective effort.

Of course now that the Raps are over .500 and two games up in the Atlantic, this team will really be tested. This week alone the Raps face both LA squads and an Orlando team that beat-up on the Nets last night. Speaking of staying the course and showing resolve, the Raps will have to do both if they intend to continue the hot steak they have been on as of late.

Before wrapping this up a quick thought on Atlanta. This team has some really nice players. Joe Johnson and Josh Smith are two guys that you can really start building a solid team around. Throw Marvin Williams in there and you have a good young core of players who need some veteran leaders who can show them what it takes to win and can still contribute on the floor. Vets like Tyronne Lue, Lorenzen Wright and Speedy Claxton are not those guys. It would be great to see that team move some young guys like Josh Childress and Sheldon Williams therefore to acquire said vets. Both are young guys with upside that will have some good value on the trade market. They need to move some of this young talent that they have accumulated over the years to improve now and start the process of making this team a competitor...

...which is something it feels like the Raptors are becoming overnight.