Share All sharing options for: Game-Day Preview - Raptors vs. Rockets 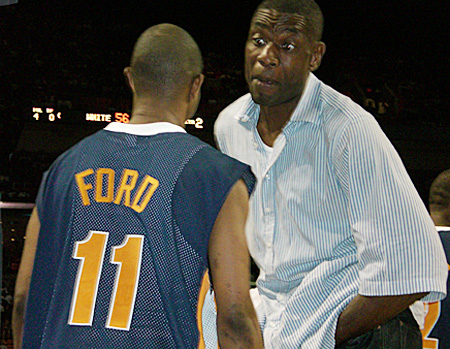 Yao Ming is still out.

Tracy McGrady might not play because of the flu.

And the Rockets are coming off an inexcusable loss to the Celtics where they blew a double-digit fourth quarter lead and shot only 32.1 per cent from the field.

Hey, we gotta start with some good news after that walloping the Spurs put on us Monday night right?

The Raptors try and get back to their winning ways tonight against the Rockets in Houston in what appears to be a battle of offense versus defense.

The Rockets as previously mentioned, are statistically the league’s top defensive club while the Raptors, Monday night’s disaster aside, are one of the top offensive ones.

Therefore I’m already seeing this game boil down to which team can execute their style best; the Raptors "move-the-ball and get out in transition" game, or the Rockets "slow things down and exploit mis-matches" system.

The Rockets are one of the league’s least efficient offensive clubs without Yao and while Bonzi Wells had 27 points Monday night in place of T-Mac, the club at times lives and dies by its long-range game. On Monday night they died hitting only one of 22 attempts from beyond the arc although the Raptors can’t afford to let the likes of Shane Battier, Luther Head and ex Raptor Rafer Alston, bomb away.

And this is the problem a healthy McGrady presents. He’s still one of the toughest players in the league to guard off the dribble and this creates tons of open looks for his teammates.

With Anthony Parker awaiting MRI results on his ankle, it’s almost certain that the Raptors won’t have him tonight to guard McGrady (assuming T-Mac even plays) and therefore either Mo Pete or Juan Dixon will probably be thrust into the starting lineup. Peterson’s length and size on McGrady would be advantageous but Sam Mitchell sounds like he wants to keep his bench group intact due to the way they’re currently playing together. Maybe Joey Graham gets the nod?

So what about the keys to a Raptors win tonight? Will Toronto be sent home to play the Bucks on Friday winning only one of their three road games on this swing? Here’s some of the things I’ll be looking to see tonight to ensure that doesn’t occur:

Bosh Bounces Back: CB4’s troubles with single coverage against athletic defenders has been well documented and discussed this season. So do we throw Juan Howard into that field? Howard will draw the assignment of containing Bosh tonight and this bodes well for a huge rebound performance for the Raptors’ All-Star. Bosh is much quicker and athletic than Howard and should be able to get any shot he desires. He should also be able to get to the free-throw line thanks to these attributes regardless of the presence of Mt. Mutumbo.

Containing T-Mac: I highly doubt that McGrady sits again tonight so Sam Mitchell and co better have done their homework. T Mac has carried the Rockets on his wonky back in the absence of Yao Ming and while he’ll still get his, Toronto needs to make sure they force him into fade-away jump shots with the shot clock winding down and not give him wide-open lanes to the basket. McGrady is leading the Rockets in assists this season so not only can he kill Toronto with his scoring, but his penetration opens up opportunities for Houston’s well-placed perimeter shooters. In this sense, keeping T-Mac under wraps disrupts Houston’s entire offence and forces players like Alston, Howard and Battier to adopt more of the scoring load, something they’re just not as effective in doing.

Everything Else: Yes, that’s admittedly a random key. However based on how ineffective Toronto was in nearly every department on Monday night, I’m looking to see a complete rebirth of sorts. The Raptors shot only 19 free throws against the Spurs and this simply isn’t going to get it done...especially from the team with the NBA’s sixth best percentage from the line. Toronto needs to come out aggressive and get to the rim. The Raps were also beat on the boards against S.A. and Houston is the league’s fifth-best rebounding club. Even without Yao Ming, players like Bonzi Wells, McGrady, Battier, and Chuck Hayes all rebound well at their respective positions. And let’s not forget Mr. Mutumbo. At 65, he’s still one of the league’s best shot blockers and Jose Calderon and TJ Ford are going to have to hit their jump shots and floaters as lay-ups will probably be few and far between.

I guess overall I’m just hoping to see a much more hungry and prepared Raptors squad than the one that took the court Monday night. A win over the Rockets would put a nice bow on a great month of February where they’ve won eight of their 11 matches.