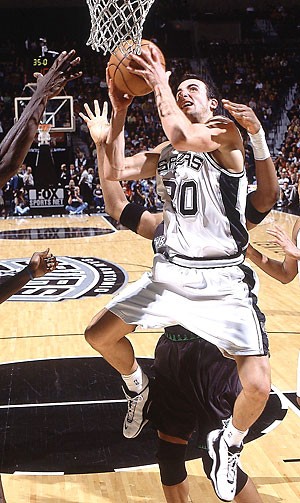 In yesterday’s preview I spoke of a number of key points to getting a win over San Antonio. Things like rebounding, guarding the Spurs’ long-range bombers and keeping Tony Parker in check.

Well for those who saw San Antonio’s 107-91 demolition of the Raptors last night on RaptorsTV, it was evident that none of the keys were followed.

The Raptors were out-rebounded, out-scored in the paint, out-gunned (San Antonio shot almost 40 per cent from long range) and allowed Tony Parker to run absolutely wild offensively as he finished with 27 points and nine assists.

In fact, as Sam Mitchell alluded to in his post-game interview, this was indeed one of those games where "(the Raptors) shouldn’t have even shown up to the stadium."

I realize that the term "they put on a clinic" is used far too often in sports’ journalism but indeed, this is the best description I can come up with for describing what Greg Popovich and his Spurs did last night. Offensively their spacing allowed them to get almost any shot they wanted which resulted in 53.2 per cent shooting from the field. And on the defensive end, the Spurs’ perimeter players stopped Toronto’s attempts at penetration or forced them into the long arms of the law...aka Tim Duncan, Francisco Elson and even Robert Horry.

But what can you say? This should be expected from the Spurs and admittedly I’m feeling like I slightly understated how good this team still is. You can see from their sets, cuts to the basket and spacing just how well this team knows itself and they’ll once again be among the top contenders for the NBA title come playoff time.

Seems like I’m not the only one who feels that way as on their latest power rankings, ESPN.com has the Spurs sitting behind only Phoenix and Dallas at the top.

The Raptors aren’t doing so badly themselves sitting in seventh for the third consecutive week. But if Toronto doesn’t have its full squad on hand for tomorrow night’s tilt against the Rockets, it’s doubtful that Toronto can keep its ranking.

Starters Anthony Parker and Jorge Garbajosa were both injured in last night’s contest and while Garbajosa appears to only have a bruised knee, (meaning he might be available Wednesday) Parker is another story. Parker found himself victim to yet another Bruce Bowen misplaced foot as he came down on top of Bowen in the second quarter, spraining his ankle. X Rays came back negative but contrary to the Swirsk’s comments about "it’s good that it’s not a break," sprains, and I know from personal experience, can be even worse. Sometimes with a break it’s simply a matter of resetting the injury and letting the healing take it’s course. Sprains, especially ones in the third degree mould, can linger for months on end.

There’s no word as to the severity of the sprain and hopefully we’ll know more as we head towards tomorrow night’s match.

The one encouraging thing however that I’m taking from last night’s loss is that the Raptors played through to the end. Down by as many as 30 at one point, Sam Mitchell and crew did everything in their power to pull closer, even with Tim Duncan and Tony Parker still in the game. I didn’t feel that Mitchell was out-coached, there weren’t isolated plays where the Spurs got key baskets, but rather it was a total annihilation and Toronto is definitely not in the same league as San Antonio as of yet.

My hat does go off to Sam however for his attempts to get something going. He tried some interesting lineup combinations and perhaps had his most success using Ford, Calderon, Juan Dixon, Chris Bosh and Andrea Bargnani in the fourth quarter. However the Spurs had simply dug too deep a hole for the Raptors to climb out of by that point.

Juan Dixon had a decent game in his second stint of action since being acquired fromPortland and showed some of the streaky shooting that I’m expecting to see more of off the bench for Toronto. Interestingly, it already appears that Dixon is going to find himself ahead of Joey Graham on Toronto’s depth chart and perhaps Mitchell is trying to show Joey how someone much smaller can bring the targeted aggression and intensity that is required for the Raptors off the bench.

Chris Bosh struggled being guarded by Francisco Elson and Tim Duncan and hopefully will rebound in a big way tomorrow night. I’m starting to notice that teams with multiple "bigs," especially of the athletic variety, (Detroit, San Antonio etc) have been most effective at containing Bosh and when Bosh shuts down, it can grind the Raptors’ offence to a halt. Without Bosh, Toronto depends even more on the penetration of Calderon and Ford as they simply don’t have the wings who can take defenders off the dribble. And last night Ford simply couldn’t get a call and Calderon was hounded on screen and rolls making for a very frustrating night for both of them.

In fact Toronto’s best player may have been former Spur Rasho Nesterovic. Rasho single handedly kept Toronto from going down by 40 points at various times last night and finished with a solid 16 points and nine rebounds in the loss. Seeing these sort of games from Rasho should be a reminder to the rest of the Raps that they need to get him involved more in the offense at times to open things up for Bosh and Bargnani.

Incidentally, had it not been for the destructive 35 to 16 trouncing in the second quarter, Toronto may have been able to at least keep pace as they equalled San Antonio’s 26 third quarter points and bested them 27 to 19 in the final frame. Yes, some of that was when Matt Bonner was in the game for San Antonio but Toronto didn’t simply roll over and die.

And from a fan’s perspective I admit that it was very tempting to do just that and change the channel and shut the TV off completely last night.

When Robert Horry was air-balling a 3 pointer one minute and banking one in the next, when Francisco Elson was stroking 18 foot jumpers, and when Tony Parker and Manu Ginobili (who abused his "defenders" all night) were hitting ridiculous shot after ridiculous shot, you got the feeling it was going to be a long night.

Here’s to hoping that a good day’s practice heading into Houston makes for a much shorter and pleasant outcome tomorrow evening...