Share All sharing options for: Tip-In: Best Actors in a Supporting Role 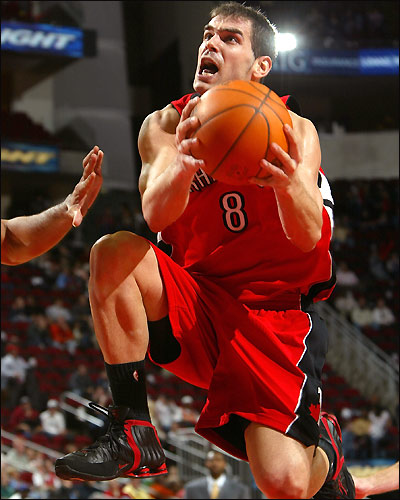 In what was a foul-filled and extremely choppy game, it was the Raptors supporting cast who brought home the award for their 31st win in a 93-76 victory over the Bobcats.

Chris Bosh, Jorge Garbajosa, and even Kris Humphries got into early foul trouble forcing Sam Mitchell to play small ball for most of the second quarter. However the lineup of Mo Pete, Jose Calderon, Joey Graham, Andrea Bargnani and Juan Dixon kept the Bobcats in check with Bargnani grabbing a career-high 11 rebounds and perhaps having his best game defensively of the season altering shots and chasing down loose balls.

The Raps of course caught a break when Emeka Okafor, who dominated Toronto on the glass, left the game in the second half with a strained left calf and Gerald Wallace left soon after with a strained groin.

But it probably wouldn’t have mattered as soon as Chris Bosh came back into the game in the second half. Bosh scored all 24 of his points in the second half and added 11 rebounds for the game and with the starting cast back in place, never looked back.

Toronto now sits at 18 and six after losing its first game of the New Year to Phoenix, the third best record in the league since that point behind only Dallas and the aforementioned Suns. And the best thing about this is that even in wins like last night’s sloppy affair, the Raptors seem to be focussing on improving different parts of their game if others are struggling. The Raptors shot a respectable 44.9 per cent for the game from the field but what was really impressive was the fact that they held the Bobcats, even undermanned, to only 32.9 per cent. Even newcomer Juan Dixon seems to have already bought into the defensive mentality as at times last night he could be seen fervently trapping his man along with the likes of Ford and Calderon.

Calderon and Ford switched gears from Friday night and while only had seven assists between them, they did put up 31 points together. And despite playing only eight minutes, fans once again got a look at just what Joey Graham can do...as a power forward.

Sam Mitchell used Graham at the 4 in a smaller lineup and Graham responded. Joey still needs to pick his spots when being aggressive (should have dunked a missed lay-up/picked up four quick fouls) but I’d like to see Sam use Graham down low more often. He looks much more comfortable closer to the basket and perhaps we might see more of a small lineup with him at the 4 and Dixon and Peterson/Parker at the 2 and 3 spots.

And how did Dixon fare? Well he looked a bit rusty going 0 for 3 but he did see 16 minutes of court time. It will be interesting to see how many minutes he gets heading into two huge games this week for the Raps against San Antonio and Houston.

As a follow-up to the Dixon/Jones trade, Matt from Blazersblog and I discussed the swap and he answered a few questions for me concerning Dixon:

Hey Matt, why do you think Portland made this deal?

-Portland has needed some good PR in the worst way. The club bringing back a former University of Oregon star in Fred Jones makes everyone happy; even if he is a backup at best.
-Dixon wasn't bringing a whole lot to the table this year. People talk about him being a "good shooter", but in 131 games with Portland he shot 43% from the field and 37% from 3pt. That's a decent enough three point shot, but not "great".
-Dixon didn't have a long-term future with the team. He's a liability on defense because of his size, and with Brandon Roy and Martell Webster, Portland already has it's 2-guard of the future and its shooting specialist of the future.
-This allows Brandon Roy to slide over to PG and not have a liability on defense next to him.
-Throw in Freddy's commitment to not pick up the player option and the "future considerations", and it became a no-brainer.
-And, you can't talk about Freddy without mentioning his athleticism. A few crowd-pleasing throwdowns certainly won't hurt Rose Garden attendence.

Why wasn't Dixon fitting into the Blazers regular rotation?

Last year and the first half of this year, Portland needed someone to fill minutes while the youngsters matured. That's just not the case anymore. With Brandon Roy being ready to start full-time right now, Dixon became a bench player. And with Sergio Rodriguez taking over the backup PG position, you simply can't play Rodriguez and Dixon together; they're both too undersized. Add to that Martell Webster's slow maturation into being ready to be a bench player, and Nate McMillan's continuing emphasis on defense, and Dixon just didn't have a role. Portland has been trying to establish a regular rotation all season, and Rodriguez, Webster, Travis Outlaw and LaMarcus Aldridge all need more minutes off the bench at this point.

Will Fred Jones be a better fit with Portland?

Probably a little bit. There's going to be a monthlong-or-so honeymoon period with him, purely because he is a former Oregon Duck star. (I'm a U of Oregon alum myself, and I'm fairly giddy to see him in a Portland uniform. At Fred's press conference yesterday, he was saying things like "I used to lay in my room at night when I was a kid and dream about playing for Portland" and "I just can't wipe the smile off my face, I'm so happy to be here, and this team is going to get 110% of everything I've got.") I think the addition of Freddy sort of turns Portland from a 9-man rotation to a 10-man rotation, and I see him getting about 10-15 minutes per night off the bench, backing up Brandon Roy at the 2-guard and playing the "3" in the small lineup. Nate McMillan rewards players who work hard, and it sounds like Fred's going to do that. Honestly, you could make the argument that Portland has gone from one mediocre backup SG to another, but we're still excited about it.

What can Juan Dixon bring to the Raptors?

I may sound down on Dixon, but he does have some value. For a long period of time in Portland he was the starting 2, which won't be a problem for you guys, but that's too much for him to handle. He's a guy who you can tell right away if he's "on" that night, and should be used as a shooter off the bench. He can provide some decent three-point shooting to relax the defense a little off of your inside guys when he's on. But he doesn't add much beyond that; he's a mediocre passer, a decent ball-handler, and a poor defender. I'll say this, he isn't afraid to put it up, hot or cold. We called him "Stop Shooting Juan" for awhile there last season, but he did hit some big shots. And, he's a great character guy who’s overcome a lot of adversity in his life (drug-addicted mother growing up, father died young, etc).

If he doesn't get minutes, will that be a problem?

Not at all. To Juan's credit, he's been jerked around a little bit in Portland -- losing minutes to younger players, sporadic playing time, seldomly defined role, etc -- and has handled it very well with very minimal complaining. I think going to a team like Toronto who's in the thick of a playoff race will be good for him, he's a very solid guy who will just enjoys the competition.

Some great insight for sure and as part of my chat with Matt, I answered some questions of his on Freddie Jones too. While things didn’t work out with Freddie, all of us here at the HQ wish him best of luck in Portland. Matt also passed on a piece from Blazers’ beat writer Jason Quick:

*Make no mistake: Dixon was glad to be leaving Portland. He wanted a better playing situation and had become confused as to what McMillan wanted out of him. Although both remained civil toward each other - they shook hands and wished each other well after the trade - there was a definite and growing air of tension between the two this season.
McMillan denies that tension had anything to do with their tete-a-tete during a timeout on Jan. 19 in Phoenix, when he and Dixon argued over what was, and wasn't, a good shot. But when Dixon countered McMillan during the timeout, he was told he was being replaced in the game by Jarrett Jack. He never returned in that game, and really, never was a factor for the rest of the season.
"No, no, no,'' McMillan said when I asked him if that confrontation had anything to do with the trade. "I've had that conversation about what is a good shot with several of our players.''
McMillan insisted Dixon's massive reduction in minutes was due more to the emergence of Brandon Roy than anything else. Plus, McMillan said he could tell Dixon wanted out.
"I think he wanted this. He didn't say that to me, but I think he wanted to be moved,'' McMillan said. "He wanted the opportunity to go somewhere else and try to play. Brandon was doing some good things, and Brandon is the future of this organization, and I think Juan sensed that very quickly when he met Brandon and saw what Brandon could do. He sensed that Brandon was going to take a lot of minutes.''
Dixon, meanwhile, became so confused at his demotion that he often was left chuckling at his misfortune.
"When I got the opportunity to play, I thought I handled it well,'' Dixon said. "At times, I was inconsistent, but my minutes were inconsistent. After a while, I couldn't get a good feel for what coach wanted - I couldn't play my game. It's hard to play when you don't have confidence from your coach. So I think this is a good opportunity for me to get a fresh start.''
Dixon wanted to make it clear that he was experiencing mixed emotions about the trade. He was happy about getting that "fresh start", but he also said he was "sad" about leaving his teammates and the coaching staff.
"I have no hard feelings with Nate. He gave me an opportunity here, and last year I had career highs, and for that I have to thank Nate,'' Dixon said. "This is a business, and I know they have a plan with Brandon and their point guards, and it's a great plan. I enjoyed my time here, and I want to thank everyone for helping me. But sometimes, you just have to move on.''

With this in mind, it will be interesting to see the role Dixon plays as the season goes on. Best case scenario obviously would be for Dixon to become a Vinnie Johnson-esque scorer for Toronto off the bench, someone who could come in and give the team some energy and an offensive boost while being active on D. And the good thing is that it’s not out of the question for Dixon to fit this niche. It was less than two years ago that Dixon torched the Bulls while a member of the Wizards in their first-round playoff match.

The Raptors look to have one of the most cohesive lead and supporting casts in the league as is...let’s hope that Dixon becomes a solid role player as well.