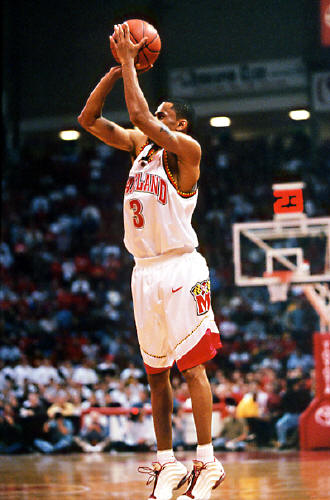 Did we just trade Fred Jones?

I didn't even know he was on our team?

That's sort of the reaction I had when the news of the Raptors trade for Juan Dixon broke about an hour ago.

I mean of course I knew he was a member of the Raptors, it's just that ever since a solid pre-season, he'd fallen off the radar completely.

Jones at the time of his signing was supposed to be that missing "athlete who could get to the rim" player Toronto had been seeking since Vince decided he wasn't going to dunk for the Dinos anymore. Instead, Raps fans saw a player who like Vince, settle for the long-range bomb far too often and simply didn't seem comfortable in Toronto's offensive scheme.

It appears that Jones will now try to re-establish himself with the Portland Trailblazers as the Raptors have swapped him for Juan Dixon, another under-sized two-guard who while slightly taller, is not the athlete that Jones is.

As discussed in our article a few days ago, for me this trade really amounts to Bryan Colangelo saying "well that didn't work!" concerning the Fred Jones' signing. Taking on Juan Dixon doesn't really address their needs in terms of someone who can get to the rim, but he is a slightly better shooter than Jones, (41.3 per cent for Dixon as opposed to 41.1 for Jones.) and more importantly, a cheaper contract.

Jones has a year left on his deal after this one in addition to a player option meaning that Toronto would be on the hook for close to 7 Million if they had kept him.

Dixon on the other hand has only a year remaining on his deal which would pay him less than 3 Million next season meaning a substantial savings for BC and the Raps.

My question however is when will Dixon ever get to play? He's definitely not a 3 and right now, I doubt he takes significant minutes at the 2 from either Morris Peterson or Anthony Parker. So would he maybe play some 1 and take Darrick Martin's sparse time? I doubt that either. In all likelyhood Dixon will be the ninth or tenth man off the bench for the Raps when all is said and done.

However more importantly, what he might do is provide some insurance for the Raps. If Morris Peterson decides to take his talents elsewhere, perhaps Dixon could fill in admirably as a cheaper 3-point scorer off the bench. While Mo is bigger, the two have similar games and like Peterson, Dixon comes from a great college program at Maryland which he led to an NCAA Championship.

Yes, perhaps this is the foresight of Mr. Colangelo as not only might he be looking at Dixon as a backup plan, he might also be looking at him as an extra contract to deal come this off-season. If Toronto needs to package some players to get into the draft or upgrade their talent at certain spots, Dixon's contract is much easier to swallow for teams than that of Fred Jones.

Kudos to BC for another job well-done as even if Jones returns to his former dunking and slashing self in Portland, he obviously wasn't getting it done here in Toronto.

Ironically, the Fred Jones deal seems to have been the biggest deal of "deadline day." Besides the Hawks giving up a second=round pick to the Mavs for Anthony Johnson to address their point guard situation, things were pretty quiet as I expected.

No Kidd deals.
No VC moves.
No Gasol to the Bulls for everyone but Scottie Pippen.

However there is an interesting rumour that I did stumble upon courtesy of Chad Ford's latest chat.

Prior to the announcement of the Fred Jones deal Ford was reporting that the Raps were pressing hard to get Darko from the Magic. This would be a very interesting move on so many levels (and it would probably require another article) but I'd be keeping my eyes on this come summer-time. Darko has been better this season but still is nowhere near scouts' expectations when he was picked ahead of Melo, Bosh and Wade. As a result, it'll be interesting to see if the Magic decide to overpay to keep him.

If not, I wouldn't be surprised to see BC make another strong push...

We'll stay tuned till then.