Share All sharing options for: Tip-In: The Little Things 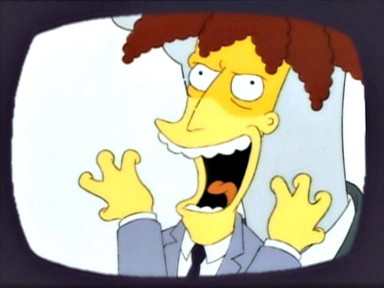 Are the Cavs a better team without Zydrunas Ilgauskas?

Maybe a better team with him coming off the bench?

Based on the performance of Anderson Varejao (aka Sideshow Bob) last night in Cleveland’s 86 to 85 victory over Toronto, you could probably argue either or.

While Lebron James paced the Cavs with 29 points, it was Varejao who absolutely killed Toronto with 16 points and 15 rebounds while shooting eight of nine from the floor. He was a human pogo-stick and therefore got easy put-back dunks and tip-ins including what was eventually the game winner with 16 seconds left.

The most disappointing part of this loss though for me was not just Varejao’s antics; it was a number of "little things" that Toronto didn’t do to close this one out.

-They let Lebron get going to start the third quarter after holding him in check the entire first half.

-They didn’t get to the rim nearly enough (they shot only 17 foul shots with Chris Bosh only attempting six of those.)

-And while they did play some great defense during the game’s final possessions, they also turned the ball over at the opposite end and failed to execute to any degree of success when the game was on the line.

In the end, after Varejao’s put-back dunk gave Cleveland a one point lead, TJ Ford over-dribbled and almost turned the ball back over to the Cavs resulting in a jump ball. Toronto won the jump, but the ball squirted back across half resulting in more time elapsing off the game clock and Toronto forced to call a time-out.

With only two seconds left, Morris Peterson sprung free for a wide-open turn-around look at the basket which unfortunately, for the 18,900 in attendance last night, hit front rim.

Peterson actually could have taken another split second to setup as I don’t think he expected to be that wide open on the play. But in any event, it really shouldn’t have come down to this last second shot.

After the game I was watching some of the highlights from the rest of the league last night and started thinking about today’s impending trade deadline and more importantly, if Colangelo would make any moves. We’ve discussed the probability and various scenarios on the site in the last while and last night’s game was perhaps the best proof yet that this team still really needs both a solid rebounding presence and an athletic scorer. Had it not been for Andrea Bargnani’s long-range heroics (he was seven for 14 last night with 18 points,) I’m not sure Toronto would have been in this game as at times the Raptors were very perimeter oriented.

And while Bargnani did grab seven boards (which for him seems like 27) you have to wonder if playing him in the crunch was the right decision considering the way Varejao was bouncing around.

But who else could Mitchell have played instead?

The line-up for the game’s final minutes yesterday evening looked like this:

If you take out Bargnani, maybe Rasho or Garbo stops Varejao from getting the put-back dunk (and that’s a big maybe considering how effective ANY Toronto player was on Sideshow Bob last night.) However Toronto probably still finds itself down because without Bargnani, who gives them enough scoring to hang around?

So maybe you take out Mo Pete for some more size. Well, that’s fine too but both he and Anthony Parker did a great job defensively on Lebron James forcing him into tough jumpers. So perhaps if you take Peterson or Parker out, James goes off and Toronto finds itself a lot further behind on the scoreboard.

And what about TJ Ford? His decision making on the offensive end was suspect for sure but at the other end of the court, he did an amazing job defensively on Larry Hughes (who had torched Anthony Parker earlier in the game) considering his lack of size and height. Maybe Calderon would have directed traffic better and got some more open looks for the Raps but would he have been as effective in containing the Cavs defensively? It’s moments like these when you really want to meld the two point guards together to actually create "Forderon."

Yes, it’s definitely a dilemma for Sam Mitchell and for that matter Bryan Colangelo come today’s trade deadline. There’s room for improvement but do you live with the bumps in the road now because you believe the team will improve in those areas next year or the year after? Or do you get hungry for more immediate success and try to make a deal?

ESPN.com is reporting this morning that the Cavs have reached out to the Raps to help facilitate a deal so they can acquire the Kings’ Mike Bibby. Toronto is one of the few "cap friendly" teams in the league right now who could take on some extra salary in the short-term so it will be interesting to see if BC decides to shake things up a bit. Fred Jones (who actually played more than Joey Graham last night) is the most obvious player who could go but maybe after last night’s game, BC has other players in mind as well.

After all, sometimes it’s the little things that make the biggest difference...