Share All sharing options for: Game-Day Preview - Raptors vs. Hawks 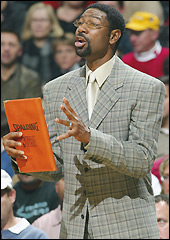 How about a round of applause for the 2006-07 Raptors up to this point?

Prior to the season’s tip-off, did anyone think that the team would be sitting at .500 this late in the season?

Anyone think that Chris Bosh would be voted into the starting line-up of this year’s All-Star game?

How about anyone thinking the team would gel this quickly and this well?

And finally, that both of the Raptors’ rookies would be headed to this year’s All-Star weekend and that Toronto would become the first team in NBA history to sweep the "coach, rookie and player of the month" awards?

Maybe the biggest "to do" of all of these accomplishments is Sam Mitchell’s recognition. The much beleaguered coach has done an excellent job of guiding the Raptors this season and while this is a blog entry for another day, consider the seasons the likes of Mike James, Charlie Villanueva and even Matt Bonner (injuries aside) are having outside of his tutelage!

Well, let’s not get ahead of ourselves I guess...first, a big game against the Hawks tonight.

Yes, I jest but this is another match where I’d like to see Toronto lay a serious thumping on the opposition early so that it can prepare for a tougher stretch of games coming down the pipe. Whereas January saw Toronto play the likes of Charlotte, Boston and Philadelphia, February has Toronto on the road against the Spurs, Bulls, Rockets and Pistons and even at home against the Lakers, Cavs and Nets. In fact looking at February as a whole, besides this Atlanta match-up tonight, the only other game which looks to be an easy win is February 24 against the Bobcats and even that game is on the road. That’s why while the Hawks don’t represent a division rivalry, this is still another of those "must-win games over lesser opponents."

And to do it, the Raptors are going to need to keep up their excellent defensive play of late. The Hawks are still one of the league’s worst offensive clubs (disregarding the beating they laid on against Golden State earlier this week considering that the Warriors may be the NBA’s worst defensive club at present) and therefore Toronto needs to ensure that they force Atlanta into as many low-percentage shots as possible.

I do have two worries about tonight’s game however.

1) The All-Star snub effect. Joe Johnson was not among those reserves announced last night selected to attend this year’s All-Star game. In previous years when this sort of thing happens, I’ve seen that player then go off on his team’s opponent the very next night. Call it a statement if you will but let’s just say that I think Anthony Parker and Mo Pete will have their hands full tonight chasing Johnson around.
2) A healthy Hawks’ squad. The Hawks’ record this season hasn’t been pretty (17 and 27) but they did actually post a winning record in January (going 8 and 7) which was their first in almost three years and heading into tonight’s game have won four of their last five games. Part of the reason for this recent success has been that Atlanta has finally had some its key players return from injury including Josh Smith and Tyronn Lue, and may also get a return from guard Speedy Claxton. Both Lue and Smith have made for tough match-ups for the Raps in the past and therefore this isn’t going to be the same ATL squad who Toronto demolished about a month ago.

The bottom line for me in this game is that Toronto needs a good game from its bench to get this win. I expect Atlanta’s starters to give Toronto some problems with their quickness and athleticism and therefore the likes of Bargnani, Graham, Peterson and Calderon (assuming he doesn’t start again) need to ensure that they put this game to bed.

On a website related note, yes, the comments are back. As most of our readers know we’ve had some issues with spamming and hopefully this will be the last time we need to shut the comments section down while performing site repairs. However, please contact us at raptorshq@hooplife.ca if you continue to experience any problems in posting as we’d like to ensure that this issue is corrected for good.