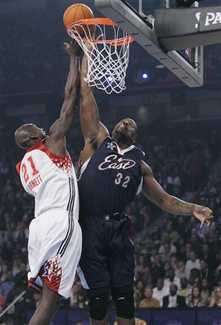 I hope Vegas didn’t wear Chris Bosh out…because Toronto’s going to need him to close out this month.

Bosh had 11 points and seven rebounds in the East’s 153-122 loss to their Western Conference counterpartslast night in a game that was a bit of yawner. Beside the blow-out score, the Eastern Conference was playing one on five most of the night (ahem, Lebron James and Gilbert Arenas) while the West was cutting to find the open man and therefore draining 3-pointer after 3-pointer. This was incredibly frustrating for viewers like myself as the East didn’t really look to get everyone involved. And perhaps that would explain why Bosh didn’t score his first basket until the third quarter...yes, this was one time when I found myself longing for Jason Kidd...

And as an aside, is it possible to get out-coached in an All-Star game? Mike D’Antoni had his squad going full tilt and really looking like they wanted to get the win. This was punctuated by the West picking up their defence at points to get stops (something unheard of in All-Star settings) and executing so well on offense that they had an incredible 52 assists on 69 field goals!! They also had 17 steals and forced the East into 20 turnovers. Eddie Jordan’s Eastern squad were simply out-sized, out-gunned and definitely out-run.

Last night’s All-Star game capped off what I found to be a disappointing weekend for the NBA’s annual celebrations of excellence. Gerald Green put on a good show in the dunk contest Saturday night but poor judging ruined what could have been a great finals show-down between he and Dwight Howard. Besides Dwyane Wade, the other contestants jogged through the skills competition earlier that Saturday evening and only the 3-point contest seemed to live up to its billing. And we’re not even going to re-hash the horror that was the Rookie/Sophomore game.

But considering I was simply a viewer of the events instead of a live participant or in-person attendant of the festivities in Vegas that might account for the discrepancy in tales. Because by all accounts it seems that party and celebrity-wise, the All-Star weekend was a smashing success leaving many a player short on cash and sleep.

It sounds like the Raptors franchise-piece CB4 kept the partying and gambling to a minimum and that bodes well for the team. The Raptors start the second part of their season Wednesday night against Lebron James and the Cavaliers and then follow that up with games against Indiana, Charlotte, San Antonio and Houston (the last three being road games) before moving to the month of March. None of these games is going to be easy but I’m hoping that Toronto can at least win three of the five contests to keep their recent pace going.

This recent pace has seen them rise to their highest ranking in years at ESPN.com’s Power Rankings, an amazing leap considering the team’s penchant for "cellar dwelling" in seasons’ past. And if Toronto can finish strong this month, they not only have a good chance to keep a safe distance ahead of the New Jersey Nets in the Atlantic Division, but also try to make a run at the top clubs in the East.