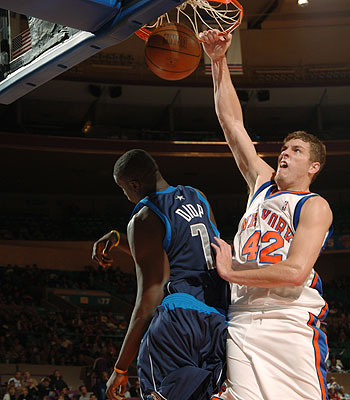 If you turned into last night's Rookie/Sophomore game, I'm hoping you were doing something else at the same time.

Because this was hardly an epic battle (unless you count the constant annyoing kids yelling in the background. What did they give to those children? Riddilin? Ecstacy?)

David Lee was the game MVP but a case could have been made for Chris Paul, Monta Ellis or Deron Williams, all of whom had a huge impact on the Soph's success.

And how did our boys fare?

Well, for starters they looked nervous. Garbs emailed his first long-range shot and Bargnani looked jittery while handling the ball and didn't settle down until later in the match.

For Bargnani however, the real problem I felt was that he had no one to get him the ball. As a starter, his point guard was Randy Foye who was doing his best Mike James impersonation. And Garbs in the second unit didn't score much, but then again this type of game really doesn't suit his style and it seemed to kill him when opponents got wide open layups.

But overall, the sophomore group is not only a more experienced bunch, but a much more talented bunch. I mean, Deron Williams and Chris Paul are both players who perhaps deserve to be playing in Sunday's main event. And speaking of these two...

...watching Chris Paul at both ends of the court passing and stealing the ball with ease made me shake my head once more at the entire Atlanta Hawks organization. Good thing Marvin Williams was in this year's game...oh wait, he wasn't?

And remember when the knock on Deron Williams out of Illinois was that he wasn't a great shooter from more than 12 feet? Yikes! Williams hit numerous long-range bombs and swished almost every one of them.

I'm hoping Saturday brings more competitive events (the Bavetta/Barkley race has to be the highlight!) and for now I'm just going to pretend that I was watching some bizarre pickup game. I mean, the Sophs shot 78 per cent from the field!!!

The best part for me however was seeing Chris Bosh courtside cheering on Andrea and Jorge...and sitting beside KG to boot! That's gotta be a good sign going into the final portion of the season. And besides the increased exposure for the Raps with the rooks and Bosh courtside, it was just great to see the team chemistry extend to an event such as this and it brought a smile to my face...

...sort of like seeing MURS referee a video game showdown between Just Blaze and Neo at Kenny Smith's party...

PS - So happy to hear that someone was listening to my suggestion of using the Roots "Here I Come" as intro musci...too bad it was T Mobile Rookie/Soph game folks and not the Raptors...