Tip-In: The Sound of Revenge

Share All sharing options for: Tip-In: The Sound of Revenge 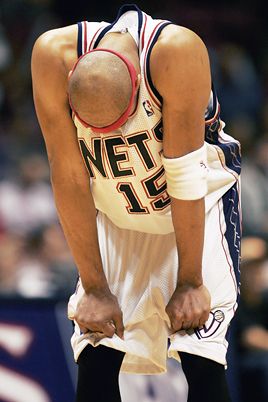 Vince Carter and the Nets

Chris Bosh and the Raptors

You could really feel the love last night.

Especially when after going to the free throw line to the tune of "M V P" chants, Vince Carter was caught on camera openly mocking the fans’ hysterics.

Hmmm...do I detect some sour grapes?

Maybe instead of worrying about the crowd’s response to Bosh’s heroics, Carter should have been shooting more than five for 15 from the field in his team’s 120 to 109 loss to the Raps.

Toronto shot 58.9 per cent from the field and New Jersey just didn’t have an answer for the Raptors’ offence who had SEVEN players in double figures and whose offence really looked unstoppable all evening.

However my hat does go off to New Jersey coach Lawrence Frank. In yesterday’s recap of the Bulls game, Howland mentioned that what Toronto did not want to see was players like Eddie House scoring 40 points. Well...House had 19 and Bostjan Nachbar had a career-high 26 as the Nets at times made this game a lot closer than perhaps it should have been. And this is where I tip my hat to Frank. The Nets used a small line-up last night and made Vince Carter the primary ball-handler, not Marcus Williams (Carter had 10 assists, Williams only 3) therefore forcing Toronto to double Vince leaving players like House, Williams and Nachbar wide-open.

It was great strategery as George Bush would say, and Toronto scrambled to rotate to the shooters on time. New Jersey hit their open looks as well shooting 50. 6 per cent for the game and 50 per cent from beyond the arc hitting 14 three’s!!

But the Raptors never faltered in their approach regardless of New Jersey’s offensive scheme and even when the Nets cut the lead to as little as two points, Toronto surged right back with a barrage of 3’s, inside looks and drives to the basket. In fact while the Raptors’ defence and rebounding left little to be desired at times (and is something the team really needs to work on come playoff time,) their offence was so pristine that it simply didn’t matter. New Jersey couldn’t get stops and Toronto just kept ramming the ball down their throats.

It was also interesting based on the comments and discussion on the site yesterday to see Sam Mitchell play both TJ Ford and Jose Calderon together in the fourth quarter to match-up with the smaller Nets line-up. Both players had great games for Toronto and at times took over offensively for the Raptors.

And you can’t say enough about Andrea Bargnani’s continued development. He uses that shot-fake and drive so effectively already and even demanded the ball in the post on a few occasions last night. It would be oh so nice for him to grab even ONE rebound but I guess that’s why Morris Peterson was so key last night. Besides being the Raps’ leading scorer after Chris Bosh, Peterson had seven rebounds, many of them in the fourth quarter, and played excellent defence on Carter forcing the ball out of his hands. Peterson has been "Mr. Fourth Quarter" as of late and his presence has helped anchor the team when it’s needed to make stops or key baskets.

Toronto now finds itself well ahead of the rest of the pack in the Atlantic and New Jersey will have to make a real push when Richard Jefferson and Jason Kidd return in order to reclaim the crown they’ve held in recent years. In fact after the game, when asked whether it was "hopeless" in terms of the Nets chances at the division title considering how much the Raptors have improved, Vince Carter responded with "next question."

Invariably, much of the coverage of last night’s game is going to focus on Carter and his exhibition of unprofessionalism, however I’d like to take things a step further.

In the final minutes of last night’s match I found myself thinking about how strange this season has been in many respects. The Raptors were hardly picked to make the playoffs in the East let alone win their division or have the Eastern Conference’s fourth best record…and in fact the Nets were picked to sit right about where Toronto currently is by many! It’s almost fascinating how these two teams have traded places, something that seemed utterly impossible in the wake of the Vince Carter fiasco. At the time of the trade, both Howland and myself actually defended Babcock’s move and sure in the short term it hurt, but I remember saying at the time "yeah, Vince is resurrecting his career in Jersey...but that won’t last. He’ll wear out his welcome soon enough and his true colours will shine through."

And indeed they have.

Which makes his mockery of Bosh’s "MVP" chants via the ACC faithful that much more absurd. As Leo Rautins correctly pointed out last night, it’s one thing if Kobe Bryant is thinking that the MVP chants are premature, but it’s another for Vince, who appears second to Pau Gasol on the hoopshype.com rumour mill and who ESPN.com recently voted as one of the top 10 players to be dealt prior to next week’s deadline, to be making fun. In fact, after the game Howland posed the question if I could "name five guys I’d rather have than Bosh on the Raptors right now."

I’d say on talent and ability alone, Kobe, D Wade, Lebron and Dirk...well, with the way Bargnani’s developing, maybe not even Dirk...

KG or Tim Duncan? No, not at this stage of their careers.

Steve Nash? Love the guy but once again factoring age in, no way.

Maybe the closest person to round out the five would be Dwight Howard or Amare Stoudamire but both have their detractions.

Shawn Marion, Chris Paul, Yao Ming would all fall in a category just below the top 5 for me.

Then Howland asked "Name 20 guys you’d rather have than Carter?"

That was easy. In fact you might be able to name 30 or even more.

Yes Vince is a talented player offensively, but in between getting the ACC faithful to give him a "HELLO," (which as an aside was one of the funniest moments in RaptorsTV history) Jack Armstrong astutely pointed out that Vince, in his first few seasons in the league, looked to be a Hall-of-Famer yet never achieved that level mainly due to his competitive spirit.

While the Raptors prepare for the All-Star break I hope that Vince’s on-court antics last night fester within CB4. There’s no doubt in my mind in fact that if Carlos Boozer can get MVP consideration at one point in the season, then if Toronto continues to win games at their current pace, Bosh too should be among those final names mentioned for the award. He’s carried the team on his shoulders and has yet to take a night off, something that Vince Carter will never understand. Whether he knew the cameras were on when he mouthed those mocking words, no one knows but I hope Bosh takes it to heart for both himself and the fans of this franchise.

As Armstrong so eloquently put it: "If (Vince) cared that the cameras were on, he would have played hard on every play and not rolled around on the ground..."