Share All sharing options for: Game-Day Preview - Raptors vs. Bulls 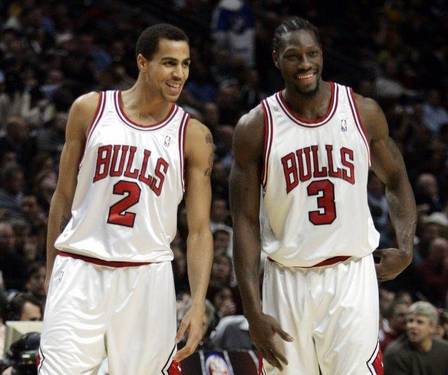 Yes, I’m a basketball nut and will watch ball at any level (I am admittedly way too excited about this Saturday’s NBDL All-Star game featuring the likes of James White and Loren Woods) but I’m simply not awaiting tonight’s match with baited breath.

Yes, that’s a bit of a negative way of looking at things but let’s face the facts.

-Toronto has lost 15 straight to Chicago

-Toronto is playing Chicago IN Chicago

-It’s about -40 outside here in Toronto.

(Ok, the last point has nothing to do with tonight’s game but considering I almost turned into Mr. Freeze walking to work today, I thought I’d throw it out there.)

Negative temperatures aside, the Raptors have really had a tough time matching up with this Bulls team in the past few years. And there are various reasons for this.

First and foremost, the Bulls possess three ultra-quick, guards who are among the best in the league at breaking down a defence.

Toronto’s perimeter defence has always been iffy at best and while it’s not exactly a sieve this year, it still has a tough time against teams with quick, penetrating players. Deron Williams caused fits for the Raptors when Utah was in town and we’ve seen other examples of it even from such bottom-feeders as Boston and Atlanta.

Chicago’s guards however combine this speed, explosiveness and ability to get to the rim with great outside shooting. Ben Gordon, Chris Duhon and Kirk Hinrich can all bomb-away from the outside and therefore when one draws the defence in, the others are standing on the perimeter, ready to either attack the basket again, or fire away.

And this is only problem 1.

Problem 2 is Luol Deng and other athletic team-mates who can man various positions causing match-up issues. Deng has emerged as a potential All-Star candidate this year for the Bulls and can score from both inside and out. Other players like Thabo Sefolosha and Tyrus Thomas are hybrid players as well and the Raptors have had difficulty keeping the Bulls from using their athleticism to get offensive rebounds and foul calls. In fact the Bulls shots 27 free-throws the first time these teams met this year.

And that leaves Problem number 3 – the Bulls’ defence. Chicago has limited Toronto to 42 per cent shooting in their first two meetings and the Raptors offensively have had major trouble getting anything going from the interior or exterior. Ben Wallace of course anchors the Bulls’ D in the middle but players like Hinrich, Deng and Duhon are all capable defenders as well.

So is that it, am I slamming the book shut and declaring loss number 25 for the Raps?

Not quite as there is a glimmer of hope.

First of all, Andres Nocioni, who is always a pain in the Raptors’ collective sides, is not playing tonight due to injury. Tyrus Thomas is unavailable for Bulls’ coach Scott Skiles and that, to a lesser degree, hurts Chicago as well.

But injuries aside, I think this game is going to come down to three things: Chris Bosh, the Raps’ ability to hit open shots and finally their defence.

Bosh was held to only 13 points the first time Toronto and Chicago met this season and missed the second meeting with his knee injury. Coming off a sub-par game in Detroit by his standards, I’m looking for him to come back with a vengeance. Ben Wallace will lurking on the help defence side but it will be PJ Brown in all likelihood who will draw the assignment of containing Bosh. CB4 should be able to use his quickness to get past Brown and either get to the line, or create open shots for his team-mates...

...which is why it’s imperative that Toronto knock them down. The Bulls are a great defensive team and won’t give Toronto too many opportunities. They held the high-flying Phoenix offence (albeit minus Steve Nash) to 40.7 per cent shooting on Sunday and therefore when Toronto gets open looks, they’re going to have to make them count.

On the other end of the court, Toronto needs to somehow do a better job with the Bulls’ slashers be it Gordon, Deng or even Sefolosha. This means being more physical with cutters and making sure on the interior to keep the likes of Deng and Wallace off the boards, even if it means getting a bit Hoffa-esque.

The encouraging thing is that Toronto is much healthier now than the past two times they’ve played Chicago and hopefully their recent defensive success continues to carry-over to tonight’s game. A win over the Bulls would be one of the biggest of the year for Toronto for various reasons not to mention having to return to the ACC to face the Nets tomorrow night. It would also keep Toronto’s momentum going heading into the All-Star break and prior to the looming NBA trade deadline.

Speaking of the deadline, it does not look like Bryan Colangelo is going to make any moves to shake-up his club. While he admitted he’s "keeping an eye on the future," he doesn’t want to alter the current team chemistry which has been so great.

It’s this chemistry we need to see in action tonight to get a win over the Bulls. Otherwise tomorrow night’s game versus the Nets becomes a bit more important...