Share All sharing options for: Tip-In: The Complete Package 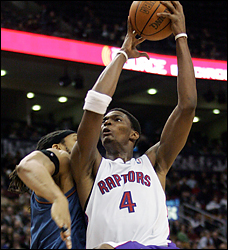 When I talked about Toronto perhaps missing a piece after their performance against Indiana, it’s games like last night’s against Washington that turns that notion right on its head.

Led by Chris Bosh and Jose Calderon, and getting great help from their bench, Toronto scored a franchise-high 43 points in the third quarter en route to a 119-109 win over the Wizards which saw the Raps shoot 59 per cent from the field.

For those who saw this game, it really showed this team at its best and on the flip-side, showed just how bad Washington is defensively. Toronto got just about any shot they wanted and the best example of this is that at one point Chris Bosh made 15 straight shots (not to mention his ridiculous ¾ court buzzer-beater to end the third quarter!)

On the opposite side of things, the Raps did a number on Agent Zero as Arenas hit only eight of his 19 shots and had he and the Wizards not gotten to the free-throw line 36 times, this game wouldn’t have been closer than a 20 point spread.

So maybe Toronto isn’t missing a piece then?

Well watching last night’s game you saw just how important Andrea Bargnani is. When his offence off the bench is rolling and he’s making those spectacular passes, (he finished with 14 points and four assists) it really makes it tough on opponents to focus in on only Chris Bosh. And both Morris Peterson and Joey Graham, while not outstanding, had solid games and gave the team a lift whenever it started to sag a bit offensively. If Toronto can get this type of consistent bench-effort, then collectively this fills the void of that missing piece...but all it really does require contributions from all of the above.

Which is why it will be interesting to see how Jose plays when he returns to the bench. TJ Ford was expected to start last night but gave his spot up to Calderon in a truly classy move as Ford felt that Calderon had earned the start with his recent play. On top of this, the Raptors are looking to ease TJ back into action and therefore Ford knew he’d only be playing spot minutes in any event. Calderon responded with a career-high 24 points to go along with 11 assists and while he won’t be attending this year’s rookie-sophomore game, he doesn’t seem concerned as long as the team keeps winning.

And while TJ Ford returned from injury, Fred Jones’ disappointing season with the Raptors continues as he sat out last night’s game with a dislocated finger. Last night’s game might have been the perfect type to get him involved in the offense again and for now it looks like the swingman rotation debate has been settled by default.

Finally, a big "congratulations" goes out to Andrea Bargnani, Jorge Garbajosa and Bryan Colangelo. Both Bargnani and Garbajosa have been invited to play on this year’s "All-Rookie Team" at the NBA All-Star weekend and kudos have to go to B.C. and his staff for acquiring these integral parts in Toronto’s play so far this season.

Oh...and additional kudos need to be given for managing to trade Rafael Araujo. I ended up catching some of the Utah/San Antonio match last night and saw the Brazilian Beast get some rare minutes thanks to the recent injury to Carlos Boozer. It was in fact very interesting to watch as both Hubie Brown and Dick Stockton were discussing Hoffa and almost rooting for the big guy. I hold no ill feeling towards Araujo (who was simply drafted way too high) but even in a new locale and new uniform, he was doing the same things that infuriated Raptor fans. Besides being unable to rebound the ball over smaller yet more athletic players, he also did his patented "two fouls in 30 seconds" move and offensively, still seemed a step behind. I’m still not sure what the Raptors ever saw in the former BYU product, but it brought a smile to my face when I realized how quickly and decisively Colangelo knew that he had to go.