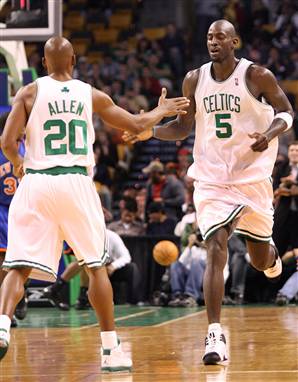 When I woke up this morning my head was pounding. It felt like Kevin Garnett had been dunking on it repeatedly.

Now I had to ask myself, was my malaise due to the throttling the Toronto Raptors experienced last night at the hands of the Boston Celtics?

Or was it the result of one...ok eight too many Rickard’s Reds?

It was probably a combination of both but unfortunately with the display Toronto put forth, the pints were indeed necessary to help numb the pain...hence the delay in today's post.

The strange thing is that we started out ok right? Joey was aggressive, TJ was darting into lanes, and at one point Toronto lead 12 to 11.

But that was about it. The rest of the game is a blur of Garnett post-ups and dunks, Ray Allen 3’s and Paul Pierce forays into the paint untouched.

And how the hell did Vinnie Johnson strap himself into a time machine and put on a Eddie House jersey?

This is one of the those games the Raps are just going to have to pretend never happened and move on. With Houston up tomorrow Toronto needs to get its swagger back and quick.

This was the free throw discrepancy in last night’s game. In fact by half it was even worse as the Celtics had shot 24 free throws to Toronto’s measly four. We’ve said it before and we’ll say it again, yes this is a jump-shooting team, but they’ve got to get SOMETHING going to the basket more often. I mean the most aggressive player in getting to the line last night besides Joey Graham was Maceo Baston! Toronto is such a good free-throw shooting team that it’s an absolute crime not to get to the line at least 20 times a game. Sure, it’s not that simple. But I think some of this falls on the coaching staff and drawing more isolation plays going to the basket instead of pulling up for J’s.

You could argue the turning point in this one was when it was announced that Bosh and Bargs weren’t making the trip to Boston. But on the court the turning point was probably right after that 12 to 11 lead for Raps. Boston got this look like "we shouldn’t be losing this game, even if it IS by only 1!" And from that point on it seemed that the Celtics were shooting fish in a barrel.

Post-game KG talked about the emphasis the team put on getting the ball inside as they knew Toronto had no inside presence besides Rasho. And this quickly became evident as once Toronto got up, Boston began going inside as much as possible and exploiting match-ups. And really there were a lot of match-ups to exploit last night. For instance my money would be on Joey Graham in a World’s Strongest Man competition against Kendrick Perkins, but that doesn’t change the fact that Perkins has about 7 inches on Graham and therefore if in close can get easy looks. And while Jamario Moon has been one of the season’s best stories, it was painfully obvious last night when he was trying to guard Paul Pierce that he has a ways to go. Simply put, the Celtics had too much skill and experience and way too much firepower.

Hot - Eddie House and the Boston Bench. Maybe Toronto could have hung around and tried to crawl back into things normally. But last night Eddie House and the Boston bench would have none of it. House absolutely scorched the Raptors and even guys like Brian Scalabrine were cutting to the rim as if they were all All-Stars. I tip my hat to Kevin Garnett for this as his intensity has the troops playing at another level.

Cold - The Toronto Raptors. It’s tough to put the whole team in this category as they were simply outmatched. The problem is that while this game was probably bound to end up in a loss for the Dinos, it shouldn’t have been this bad. Toronto just didn’t have any fight in them once they got down and you could have stuck a fork in them before the second quarter was over. In addition, neither point guard played that well and the Raptors offense looked much more like a D League team’s than an NBA franchise.

I’d be lying if I didn’t say I was slightly concerned about tomorrow’s match against the Rockets. Houston has been as inconsistent as Toronto but presents some major match-up problems for the Raps. Yao Ming stands out as the biggest of these and the Raptors have to do a MUCH better job tomorrow afternoon in terms of defending the paint...our first key to the game.

1) Protect the paint. While he’s often injured, Tracy McGrady is still one of the best slashers in the league and Bonzi Wells is no slouch either in that respect. Boston drove the lane with ease last night and the Raptors need to start taking a stand inside.

Rasho will get the assignment on Yao and it sounds like Chris Bosh will be back at last. This is great news for Raptors fans as you could see over this last stretch how desperate the team is for an inside presence. Without one, teams were staying on the perimeter and forcing Toronto’s jump-shooters into tough shots. CB4 will have a tough first test though having to take care of the likes of Ming, Hayes, Scola and Mount Mutombo. But just his presence shoot be a good emotional boost for a team that has looked down and out as of late.

He’s right and we’re seeing this each and every game from the C’s.

Toronto plays Boston again next weekend so all they can say right now is "we’ll get them next time."

PS - On a seperate note, congrats to Luke Jackson, who was called up by the Miami Heat today. We wish Luke all the best with the Heat, who are seriously looking like they could use his offensive prowess...