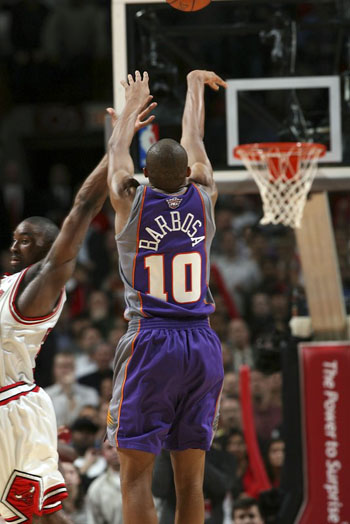 The good news is, the fans got pizza.

The bad news is, the Suns hit the pizza mark themselves...in the third quarter.

This was a game that saw Joey Graham start yet get the quick hook once again, Toronto play "Suns-ball" for a half, and Phoenix hit nearly everything they threw at the basket by game’s end. Toronto came out on the short end of the stick however and ended up losing 136 to 123.

This was the number of assists Nash had in the game.

He’s not the dominant player on a level of Dwight Howard or Lebron James but make no mistake, Nash is truly an MVP candidate. With Captain Canada in the game the Suns burst out to a huge third quarter lead. And with him on the bench, the Raptors crept back into the game until Phoenix coach Mike D’Antoni reinserted Nash to cement the victory.

Looking at this game from a box score perspective you’d think Toronto failed to play a lick of defense all night. They allowed Phoenix to shoot almost 60 per cent from the field and hit a season high in points scored. And it seemed that the Suns had open look after open look.

But if you watched closely, not all of this was the fault of Toronto’s defense and a huge portion came down to Steve Nash. His whirling dervish antics just cause chaos for defenses and Phoenix’s ball movement is so crisp that it’s almost impossible for teams to close out on everyone. And when the Phoenix shooters are on, as they were tonight, there’s not much you can do. Even when Toronto seemingly had a hand up and was giving the Suns tough looks, Phoenix was draining them. Nash was an amazing +26 tonight and controlled the game from the tip-off.

The turning point in this game was obviously the start of the second half. The Suns came out much more aggressive offensively than the Raptors and got Toronto down by double digits within minutes of the tip. As a result, Toronto got deflated and started forcing the issue thus resulting in turnovers and bad shots and therefore more fast break opportunities for Phoenix. And before you knew it, the Raps found themselves down by almost 20 and the body language showed that this game was over. I had to tip my hat to Sam Mitchell however for doing his best with what he had. Seeing his club struggling and looking like they’d rather be watching re-runs of last night’s Victoria Secret show, Mitchell tried going super-small with TJ Ford and Jose Calderon together. The combo worked for a bit with Nash taking a breather, but defensively the Suns switched everything and took advantage of the size mismatches.

Hot - The Suns wings. We’ve discussed this already but perhaps the true testament to the Suns offensive proficiency tonight from their wings was that Amare Stoudemire attempted only 11 shots. For a team seriously lacking in the size department without CB4 and Il Mago, Phoenix didn’t even need to take advantage of Amare’s superiority in the paint as the wings were making it rain like Lil’ Wayne and Fat Joe.

Hot – Leandro Barbosa. Barbosa deserves his own section but maybe all I need to say here is 35 points in 33 minutes. Barbosa was unstoppable. When Toronto tried to play him close, he used his quick first step to get by defenders and to the rim. When Toronto backed off, Barbosa fired away from the perimeter. He hit 14 of his 23 shots and the Raptors had no answer all night for the Brazilian Blur.

Hot – Rasho Nesterovic. I would have liked to see him get some more minutes after his incredible first quarter (10 points and three rebounds if my memory serves me right) but I understand that in the second half he just wasn’t matching up well with the running and gunning Suns. However Rasho has been a big part of this team’s success so far this year and it’s encouraging to see that his off-season hard work is still paying dividends for the Dinos.

I’m not going to lose much sleep over this loss. Against any other team, or even Phoenix on a different night, the Raptors might have made a go of it as offensively, they were solid. But the Suns just didn’t miss from the second half on and I’m not sure it would have mattered if the Raptors had both Bosh and Bargnani back at 100 per cent. Phoenix had seven players in double digits and just too much firepower on this night.

Rght now I’d just like the Raptors to get some practice and rest and get ready for Boston on Friday. With New Jersey losing to the Knicks tonight, Toronto has a great opportunity to not only make a statement, but start putting some distance between themselves and the rest of the division. We’re fast approaching the end of the season’s first trimester and it’s time for the Raptors to start putting together some solid victories and win streaks if possible.

One of the good things about tonight’s loss was that it got some much-needed minutes for TJ Ford. Ford had a great game offensively with 27 points but still looked rusty at times running the show but improved as the game went on. Toronto will need his penetration ability against the Celtics and while Jose Calderon played Nash to virtually a draw in the first half, he’s eventually going to need some help at the 1...

...and not from Darrick Martin.