3 in the Key - Toronto Raptors Game-Day Preview vs. Suns

Share All sharing options for: 3 in the Key - Toronto Raptors Game-Day Preview vs. Suns 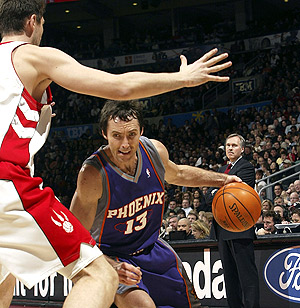 That's the Toronto Raptors' record against the Phoenix Suns since the Suns acquired Steve Nash. The Raptors hope to put that first W up on the board tonight as they tackle the Suns, who are fresh off a hard-fought victory last night in Indiana.

Phoenix has been one of the league's best teams again this year but haven't been the dominant force that many expected. They've had a few bad losses and squeaked out some wins they should have had in the bag.

The newly constructed Raptors in fact seem to present a solid test for Phoenix and vice versa...if only Toronto was healthy. There's no telling exactly who will suit up for the Raptors tonight as Chris Bosh, Andrea Bargnani and TJ Ford are all question marks.

Bosh and Ford were most active at practice yesterday and of the two, Ford seems most likely to be able to play. That being said, it wouldn't surprise me to see the Raptors err on the side of caution with all three and retain the same line-up they had to start against the Bobcats. The coaching staff may want to try to have all three ready for Round 2 of Boston/Toronto this Friday so perhaps we'll be seeing another heavy dose of Joey Graham this eve.

If that's the case, I'm not liking Toronto's chances as Phoenix will be free to exploit various match-ups. For instance, who guards Amare?

No, for Toronto to get this win short-handed, they'll need some serious bench help, our first key.

1) Get production from the bench. While Phoenix has one of the most explosive top seven players in the league, it falls off might quick after that. The Raptors in contrast, even without Bosh, Bargs and Ford, can go nine or ten deep and get solid contributions in various areas. Toronto will need a big boost from players like Kris Humphries, Jason Kapono and Carlos Delfino if they want to keep this one close and I expect to see Sam Mitchell let Juan Dixon loose tonight. Dixon should excel in this high-scoring, up and down affair and perhaps he can be the difference-maker in this affair.

2) Control the pace of the game. Easier said than done I know. The Suns play at 150 miles an hour and can easily run teams out of the gym early. However they also let teams get back into games quickly as well. Last night's match against Indiana is a perfect example. Phoenix was up by almost 20 early and looked to have the game in the bag. Only Indiana stormed back and it took some huge Steve Nash plays in the final minute to secure the victory for the Suns. Therefore if Jose Calderon and the Raps can limit the Suns' transition opportunities (which also means rebounding the basketball) then they should be able to keep this one close. The point guard match-up will inevitably be under the spotlight as comparisons have been made between Nash and Jose. We'll be watching it closely as well and have a feeling that in the end, the winning team will be the one with the floor general who does the best job leading his club.

3) Make shots. Aaah, Sam Mitchell's favourite post-game expression. In this case though it's absolutely true. With little to no inside presence, the Raptors are going to need great ball movement and spacing tonight and players who can knock it down. Phoenix can put points on the board in a hurry and Toronto must be able to keep pace. (Um...perhaps we need Luke Jackson back?)

And after seeing Humphries, Bosh, Kapono taking in the Leafs last night, let's hope they weren't taking notes from their ACC co-tenants in this department...