3 in the Key – Toronto Raptors Game-Day Preview vs. Hornets

Share All sharing options for: 3 in the Key – Toronto Raptors Game-Day Preview vs. Hornets 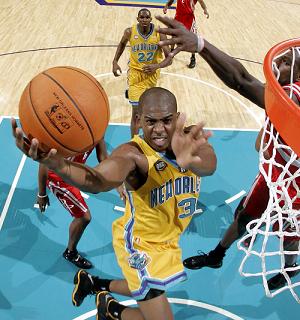 Lately, it’s been feast or famine for the Toronto Raptors’ offence.

Unfortunately getting wins out of either situation has been tough and Toronto has lost as many as they’ve won in their past 10 games.

Yesterday the media was buzzing concerning coach Sam Mitchell and forward Chris Bosh’s post-game closed-door chat and how to try and re-establish some of last year’s scoring punch.

Mitchell had the following quote after the loss to Houston which seems to sum up the team’s feeling in regards to their scoring prowess of late:

The thing is, I'm not sure why it's such a mystery as to why the Raptors aren't scoring.

LOOK AT THE STARTERS!!!

Besides Chris Bosh, the rest of the starting lineup is averaging a measly 9.53 points per game!

This means that there is tremendous pressure on CB4 to supply almost all of the team’s offence, or hope that the bench can bring in the necessary firepower with which to get the win.

The problem is, with injuries to Ford and Garbajosa, and the ineffectiveness of Andrea Bargnani, the bench has become the starting lineup.

Let’s take a look at some stats to better illustrate this point.

And that’s with a nearly 20 points per game scorer in Ben Gordon having been recently moved to the bench.

The picture doesn’t get much clearer than that.

Looking through the rest of the NBA’s teams, I’m not sure there’s a lower-scoring starting lineup in the league!

Therefore as mentioned, for Toronto to get wins they need either a momentous boost from the bench, a ridiculous defensive effort, or an 80 point night from Chris Bosh. In a lot of ways, this team reminds me of the last two season’s Lakers’ squads, ones that were so dependent on Kobe to put up 50 points a game to win.

And we all know how that turned out – the result was a middle of the road, about .500 Lakers team that squeaked into the Western Conference playoffs.

So what’s the solution?

In my books, I'd have to say that Bargs starting is problem number 1. Yes, you have to get him minutes, but he's giving the team nothing as a starter. This means that Toronto has a tough time setting the tone for the game which ends up leading to problems later on.

At least Rasho gets you 4 to 6 points around the rim to go with his solid D.

Second, Jamario Moon and Anthony Parker are no longer the answer together. When Moon was aggressive and getting to the rim, it fit perfectly with Parker's "drive and kick" style. Now, Toronto has two guys just standing around the perimeter offering almost nothing offensively. And teams know this, that's why the past few games we've seen Moon get tons of open looks. He's the worst shooter of the starters so teams are backing off and daring him to fire away.

I think Mitchell has to face the fact that he still doesn't have a real answer at the 3. Therefore I think he should start players based on match-ups to try and keep opponents on their toes. Start Moon if Mitchell feels he needs an athletic shot-blocker, go Delfino if he thinks he needs some aggression, use Kap-One if he thinks teams won't be able to guard Bosh and have to double etc. Hell use Joey if need be. He can always pull the player if things don't work.

This is of course the short-term solution and it will be up to Bryan Colangelo to address things in the long-run.

Above all else though, I think much like I discussed yesterday, the individual players on the Raptors need to do some soul searching. Sam Mitchell can yell all he wants and re-do offensive sets, but until this team gets more aggressive and gets to the hoop, we’re going to see the same inconsistencies.

Perhaps Toronto needs to take a page out of the red-hot Portland Trailblazers book. In an interesting piece yesterday from the Oregonian on-line, Jason Quick discusses a December 1 practice set-up by head coach Nate MacMillan in which he stated "the practice was basically set up for a fight to happen."

It’s a great read and makes me think that perhaps some creativity along these lines by Mitchell and co. would go a long ways towards stirring the pot with these fine young gentlemen known as the Toronto Raptors.

Anything to get to the damn free throw line.

Because that’s where I think things need to start. The Raptors are dead-last in the league in free-throw attempts per game.

Jamario Moon has been singled out because he’s got seemingly all the athletic ability in the world, but Chris Bosh and Jose Calderon need to be much more aggressive as well. The team really misses TJ Ford in this respect and even Jorge Garbajosa last year did a better job of getting to the line. He wasn’t the best slasher, but he had numerous up-fakes and tricks to get his defender off balance to draw the foul.

And this brings me to tonight’s affair.

Therefore we’ll start our three keys along these lines:

1) Attack the rim. The Hornets are constructed in a very similar fashion to the Raptors, speed at the 1, a consistent double-double threat at the 4 spot, and good outside shooters surrounding everyone. Tyson Chandler is the obvious difference-maker between the clubs but that doesn’t change the fact that the Raptors need to attack the former high-school standout in the paint. Whether that means Andrea drawing him out for long-range bombs or someone like Delfino getting in the paint, Toronto needs to be much more aggressive in general. Yep, it’s a broken record but considering how similar these two clubs are in these areas, the team that comes out on top in them should grab the W.

2) Slow down Chris Paul. Paul has been having an MVP type season and is one of the toughest in the league to contain. That’s why contain is the key. By no means can the Raps stop CP3 altogether but keeping him in check and preventing him from dictating the tempo is key. If Paul runs amuck finding players like Mo Pete and Peja for 3’s, it’s going to be lights out early for the Raptors. I’ll be looking for a similar plan as the Raptors used on Tony Parker to try and limit his impact.

The Raptors are up against a familiar face tonight in Mo Pete...