3 in the Key – Raptors Game-Day Preview vs. Bobcats

Share All sharing options for: 3 in the Key – Raptors Game-Day Preview vs. Bobcats 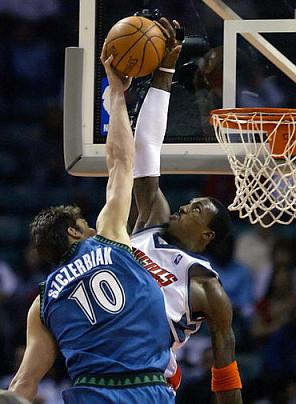 Last year if someone had told me it was Raptors vs. Bobcats on a Monday night, it probably would have elicited more than a few yawns from my direction.

The Bobcats were that team last year that no one wanted to play. Not talented enough to make the playoffs but the type that made you work every possession to get the win. Bernie Bickerstaff had his troops playing grind-it-out basketball and teams knew that they couldn’t just expect to waltz out of Charlotte with a win.

This year, that’s even truer. In the off-season the Bobcats added superstar swingman Jason Richardson from Golden State, re-upped Gerald Wallace and Matt Carroll and had Sam Vincent take over for Bickerstaff. The team is a solid six and nine and hanging around a playoff spot early this season.

Now I’m not saying the Bobcats are Eastern Conference finalists material but check the stats – this is one of the better defensive and rebounding clubs in the league, and are only games back of teams like New Jersey, Washington and of course, our beloved Toronto Raptors.

As the Toronto Star’s Dave Feschuk pointed out,there’s also an interesting sub-plot to tonight’s game as Alabama rivals Jamario Moon and Gerald Wallace face off for the first time in the NBA. Both have become starters in the league through round-about ways and we may see them guarding each other at various points. In fact it looks like both Chris Bosh and Andrea Bargnani will be sitting this one out so Toronto will be forced to play small ball all night.

And this of course brings us to key number one of three in terms of Toronto getting their tenth win:


1) Rebound the ball. Okafor. Brezec. Wallace. Richardson. Each of these guys is capable of going for over 10 boards on a given night. Without Bosh (sore right groin) and Bargnani (hyperextended left knee) it’s going to have to be rebounding by committee for Toronto or else Charlotte is going to put a quick end to their five game losing streak. Okafor in particular is going to be a test and I expect to see a lot of Rasho and Humphries to try and move him out of the paint.

2) Get to the rim. This one seems pretty obvious. Toronto has been struggling to get to the line as of late and it’s been costing them dearly. The Bobcats have a solid shot blocking club so if the Raptors are going to drive to the cup, they need to finish strong. This is where I’m hoping to see a certain Mr. Joey Graham have an impact. I ran into Joey at the local Loblaws and he certainly had enough groceries to help fuel him for the match. Graham could provide the Raptors with some much needed help in the paint both on the offensive and defensive ends. And while this might be asking a lot of Toronto’s most inconsistent player, you can’t help but think that he’s one player who could give Charlotte major problems in terms of mismatches. The Raptors outside shooting has been solid of late, but it’s the extra dunks and free throws that could really put them over the top tonight.

Which Joey Graham will show up tonight if either?
3) Perimeter defence. Finally, Toronto needs to do a better job on the perimeter tonight than they did against Washington on the weekend. With some of the best slashers in the league in Richardson and Wallace, Toronto needs to be able to play with their feet and keep these guys from getting into the paint for easy dunks or open passes out to bombers like Matt Carroll. In this regard Toronto needs big games from the likes of Jason Kapono, Carlos Delfino and Jamario Moon. Moon in particular could be Toronto’s secret weapon and I have a feeling the Raptors may have him more on attack mode tonight.

With Phoenix up next on Wednesday night, this is one the Raptors need before getting into the trickier part of their December schedule.