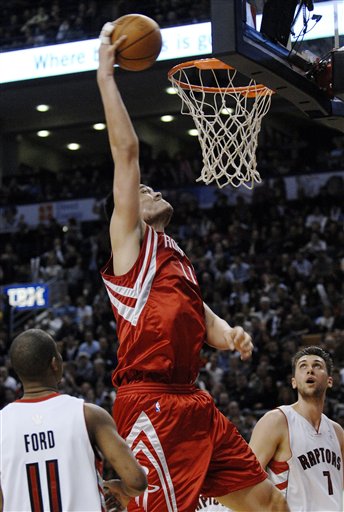 After last night’s loss, I’ve decided that I’ve been expecting too much.

I really thought the Toronto Raptors were going to be a top three team in the East this season, and be a slightly improved club come playoff time.

And can you blame me?

The team was returning its core, had improved its perimeter shooting, was a year more "seasoned" and looked to be deeper than any other team perhaps in Raptors history.

Of course both the Magic and Celtics have turned out to be far more superior than I had imagined but beyond these teams and the Pistons, the East has been tremendously mediocre and yet the Raptors have failed to capitalize.

Why is this? Last night’s loss to Houston was another example of a game that Toronto should have been able to win handily however the club came up short once more.

During our round table, a number of our participants weighed in on their expectations of the team and the general consensus was that the team to this point had been too inconsistent and therefore had not met the expectations that they'd set out. Yes they’ve had injury woes, but I’d have to agree as the team at present lacks an identity – even one of a high-scoring offensive club like that of last year.

This road trip has been the perfect microcosm of this. Toronto has had a couple games where they’ve played top notch defense and ground out wins (Los Angeles and San Antonio), then they’ve had a couple of games where they’ve shot the lights out but allowed their opponents to score just as many or more (Seattle and Phoenix.) And mixed in, we’ve seen a few games where the team can’t seem to do either consistently! (Houston and Portland.)

I realized during last night’s game that it’s tough to expect any sort of consistency from the Raptors as a unit, when of the entire team, there are only three individual players who have exceeded my expectations this season – Kris Humphries, Jose Calderon and Jamario Moon. (And Moon only slightly because while I didn’t expect him to be a starter, I did expect him to have an impact on this club.) Furthermore, there are only two other players who have even met my expectations and they would be Rasho Nesterovic and Carlos Delfino.

Look at those five names! Hardly the ones you’d want to see if you were compiling a list of "important players for Toronto who must have good seasons in order for the Raptors to be successful."

But the reality of the matter is that Andrea Bargnani has been virtually invisible, Chris Bosh has been up and down, Anthony Parker has hardly been overwhelming, Jorge Garbajosa struggled before having season-ending surgery, Jason Kapono has been underutilized, Maceo Baston might as well still be on the Pacers’ bench, and unfortunately TJ Ford has had his promising season derailed by injury.

Yes basketball is a team game, but when four of your five starters from last year have either underperformed, been inconsistent, or have had to deal with injuries, it’s extremely tough to take steps to reach that elusive "next level" that athletes so often discuss.

I’m not saying that I’m waving the white flag on the season here – one could argue that it’s almost impressive that the Raptors are looking at ending 2007 with at least a .500 record considering all of the above. What I’m simply saying is that I think I’m going to be looking at the season with a slightly more "balanced" eye from here on out. This is right now essentially a 42 win team, one that’s slightly better than .500 but missing key pieces and any sort of the consistency needed to be an upper echelon club – even in the East.

Last night’s loss to Houston was a perfect example of this. The Rockets are simply put, a middle of the road team at present, especially without Tracy McGrady. However terrible shooting from both the field and the foul line, a lack of offensive aggression, and a certain Yao Ming ended up being the difference between a win and the Raptors’ 91 to 79 loss.

It’s pretty tough to win in the NBA if you shoot under 40 per cent on a given night. It’s even tougher if you’re barely making a third of your shots like Toronto was last night.

There really was no excuse for this as Toronto’s supposed sharp-shooters Jason Kapono, Carlos Delfino, Andrea Bargnani and Anthony Parker were a combined eight for 31. That’s a nice little 25.8 per cent. You’ll excuse me now while I go and vomit.

But it gets even better. The Raptors, usually an 80 per cent free-throw shooting club, shot a horrific 52.9 per cent from the line. Yes, the bathroom calls once again.

In all seriousness though, this was the Raptors’ main undoing last night. Had they even knocked down a few of their outside jumpers and especially their free throws, the situation come the end of the game might have been quite different. And that was where I thought one of the game’s key turning points occurred.

With 3:14 left in the game and Houston up by eight, it looked like the Raptors had one last run in them to close the gap and get Yao Ming out of the game. He picked up his fifth foul soon after but unfortunately the Raptors couldn’t get that elusive number six. More importantly, turnovers, poor shot selection and missed free throws allowed the Rockets to stretch their lead to 11 and that was it.

The other point of note I felt was with a couple minutes left before halftime. Toronto had started to seize control but mental lapses allowed a Rockets 3 and then thanks to a Shane Battier steal, another lay-up to tie the game at 40. That seemed to give the Rockets the added edge and from the tip-off of the second quarter on, Houston dictated the game’s pace.

Hot – Yao Ming. Post game Ming had the following to say about his play considering he was apparently battling a case of the flu:

""I had some problems breathing," Yao said. "I felt like I had a lot of fluid in my lungs and in my nose." "But I know in the fourth quarter you can't make mistakes. I had seven turnovers and I didn't want to get any more. I just wanted to put the ball in the hoop and get the lead and go home and sleep."

Say what? How was it the Raptors weren’t trying to run Ming into the ground? Andrea Bargnani did a decent job defensively on Ming in the first half but was non-existent offensively in terms of forcing Ming to play away from the basket. In fact none of the Raptors were aggressive in attacking "the Great Wall." Case in point – Jamario Moon, who played like a scared kitten when Yao was switched onto him defensively, electing for contested pull-up jumpers. The Raptors simply did not follow our 3 keys whatsoever and when Houston finally figured out in the second half that they had a 7-6 giant who was virtually unguardable by anyone on the Dinos, this opened things up on the perimeter and it was game over.

Hot – Rafer Alston. Alston didn’t exactly tear things up last night, but having seen the Rockets a good deal this year, I thought it was worth noting how much better the team looks when he’s running the show. Alston is still no Jason Kidd, but he’s the best distributor the Rockets have and since his stint with the Raptors, seems to have tamed his free-shooting ways to a certain degree. His long-range bombs in the second-half did Toronto in and it was interesting to see his frequently compared-to counterpart Mike James, get nary a minute in the match.

Hot – Kris Humphries. Jose Calderon’s numbers on paper last night looked good (11 points, 10 assists, one turnover and 50 per cent shooting from the field) but I felt that Hump was the only player on Toronto besides Juan Dixon who tried to set the tone at both ends. Kris scored only seven points but had nine rebounds and a block in only 20 minutes giving Toronto some much-needed toughness down low. He and Rasho played Ming as well as could be expected given their size limitations and as I’ve said before, the Raps shouldn’t be dependent on Humphries for 15 and 10 each night to win.

Cold – The Raptors’ offense. Nuff said here as we’ve broken down the numbers already. But there’s one player I think we need to focus on more specifically.

Cold - Chris Bosh. Bosh is without question the most important player on the Raptors so it pains me to call him out. He’s single-handily won games for Toronto this season and kept them in many others. He’s this team’s heart and soul but last night was a perfect example of his season so far. CB4 hit only seven of his 20 shots from the field and got to the line only six times. It’s obvious that teams have scouted the Raptors quite well and know that by stopping Bosh or refusing to double him, this derails the Raptors’ perimeter attack. Unfortunately this year Bosh seems to be playing into this as well by relying too much on his jump shot. When he’s aggressive and gets to the free-throw line, good things happen. Yao Ming was really Houston’s only consistent weapon last night and I couldn’t help but think that had Bosh and co. been more aggressive, Ming would have been out of the game before its conclusion.

One of our readers made an interesting point yesterday about Bosh sitting through the fourth quarter against San Antonio and whether this would happen with any other "team leader." I didn’t think about it too much but as Bosh kept hoisting up jumper after jumper against Houston, I was drawn back to it. Something just didn’t seem right about it in retrospect. A whole quarter? The answer in my head was "no, I couldn’t see KG or Kobe sitting for a quarter, and if they did, they certainly wouldn’t be happy about it." But you’ve got to ask yourself, if Bosh keeps settling for jump shots and having five for 16 and nine for 21 nights like he did against San Antonio and Seattle, something’s gotta give.

My musings were confirmed post-game.

Sam Mitchell’s usual post-game media scrum segment of RaptorsTV was ominously MIA and in ESPN.com’s recap of the game, it was reported that Bosh and coach Mitchell had a discussion post-game.

"We had to clear some things up and Coach and I came to a middle ground," Bosh said. "I hate to lose and he hates to lose and we just talked about it.

Details about the talk are sketchy at this point and probably will remain so. And while Bosh’s second sentence sounds like your average media quote, it’s the first one that I’m interested in.

What are these "things" that he’s alluding to? Are there monsters in the closet that none of us are aware of amongst this seemingly happy-go-lucky group?

And "middle ground?" That doesn’t exactly sound like the sort of thing you want to hear your star player say after almost three and a half seasons with the same coach…

Perhaps the discussion simply centered around Bosh’s role in the offense and that will be it, the team can move on.

Because with the team’s up and down play so far this season and injury woes, the last thing it needs is another distraction. The Raptors aren’t out of the woods yet as they still have one more game before closing out this road trip against the 20 and 10 New Orleans Hornets, and then face Detroit and Cleveland upon their return to Toronto.

Toronto will have a day of practice tomorrow and after last night’s offensive woes, it’s obviously needed.

Let’s all hope that the team doesn’t need a day of psychoanalysis either.