3 In the Key – Toronto Raptors Game Day Preview vs. Spurs

Share All sharing options for: 3 In the Key – Toronto Raptors Game Day Preview vs. Spurs 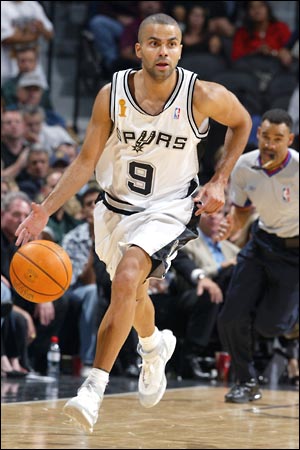 The holidays are over for many (not me thought!) and that includes the Toronto Raptors, who in case you forgot, are in the middle of a tough western road swing. Having a few days off to rest, relax and spend time with the fam, the Raps won’t be able to take anytime to get back into the swing of things as they face the defending NBA Champions, the San Antonio Spurs.

Heading into San Antonio, injuries remain the hot topic for both teams. For the Raps there is still no word on TJ Ford. As each additional day passes with no formal word from the franchise this becomes more and more concerning. The local paper is however reporting that he is back to about 90% but is still in no hurry t get back to the court. The report, and this s great news for Raps fans, is that apparently his spinal cord has not suffered damaged and he is no more susceptible to injury now then he was before Al Horford threw him to the court by his face.

Without an word on Ford, Calderon will continue to get the starting nod. The starting line-up will also feature Andrea Bargnani. As discussed here it looks like Bargs poor play as of late is the direct result of his knee injury. Colangelo has come out and said that Bargs has not healed as expected and as a result his level of play has fallen off. Sounds like the small break could not have come at a better time for the second year player. As a result, Rasho will again be delegated to bench duty but there is no question that he will get more burn than he did in the Suns game (zero minutes). In fact, despite his coming off the bench Rasho will undoubtedly play an important role in trying to stop his former teammate, Tim Duncan. A couple of points on this line-up change. First off, I like it. The Raps have to develop the chemistry between Bargs and Bosh and getting Andrea’s confidence up is imperative to the franchise long term. Second, it’s important to see that even if there are short term pains right now the Raps can afford them as there are a number of teams currently struggling. Last, if every player was as good a professional as Rasho the NBA would be the benchmark for professional sports. He has bounced back and forth from bench to starter and back and you never hear a peep out of this guy and he is always ready to contribute no matter what the capacity.

For San Antonio they have also been bitten by the injury bug as both Manu Ginobili and Brent Barry at this time are unlikely to play. Manu has played out of his mind this season and in his stead will be a Michael Finley who is in the twilight of his career. Short one of their big three (seriously there needs to be a better term for the three best players on a squad) the Raps need to try and take advantage….of course they still have Tony Parker and some guy named Tim Duncan.

Speaking of Tony Parker this guy is quietly becoming one of the elite PG’s in the West. He is never brought up in conversations about the fastest guys in the league yet he can get to the rim at will. His jump shot has also improved an enormous amount and he is becoming the complete package. In fact trying to contain Parker is the first key to the game.

1. Rotations – Parker is going to get to the rim. Calderon is not the best defender and will, like most in the NBA have trouble keeping him in front of him. As a result help D and rotations will be key. It is not so much the first pass after the penetration that worries me, it is the one after that. The perfect example was the Seattle game where the extra pass was killing the Raptors and giving the Sonics easy looks. The Raps have to prevent this from happening or there are going to be a lot of easy looks for Tim, 3’s for Bowen and lay-ups for some of the lesser known guys like Oberto.

2. Immediate Aggression – If there is one guy that needs to come out quick and establish his dominance early it is CB4. If the Spurs decided to put Bowen on him at times CB4 needs to attack, attack, attack. He cannot let the smaller defender prevent him from doing the things he does best and disrupt what he needs to do. He has had trouble with the smaller defenders in the past and this is something that CB4 needs to shake. On top of Bosh the Raps, along with hitting the long-range shots have to at least make some effort to get to the hoop. Getting Tim into foul trouble would be a big help in trying to steal this on.

3. Fast Start – Turkey, ham, sweet potatoes, you know players get their fill during the holidays just like the rest of us and rightfully so, but they have to come out and move the ball, get open looks and play solid ball right away. Against a team like the Spurs you cannot get off to a slow start, in particular on the road. An early lead, or even keeping this team within striking distance is key.

The Raps need to pull a couple of wins out of their hat before heading home. San Antonio would be a great place to start.