All I Want For Christmas Is...

Share All sharing options for: All I Want For Christmas Is...

It‘s the night before the bearded man in the red suit makes his annual world tour and much like last year, there are a number of things the Raps should be asking for. So before Mr. Claus takes off for the evening here’s a few things Raps fans hope he throws into his sack of gifts:

Some Good News For TJ:

If there is one thing the Raps team and their fans want it is a healthy TJ. It is really concerning that reports are now coming out about possible early retirement and hanging up the shoes. This could be a tragic end to a promising career and would leave the Raps short a major piece in their building process. Hearing about TJ traversing North America and talking to specialists about his health (both short and long term) makes for a sad story. It has to be so difficult for a guy that worked so hard to come back from his original injury to not know what his basketball future holds.

At the age of 24 most NBA players have a whole career to look forward to and have still not tapped into all of their potential. For Ford it is possible that he doesn’t even get to look forward to the next game. We all hope that this story has a happy ending and that we see the "Little Engine" on the court sooner rather than later. If not it could take this franchise a little while to recover from the loss of one its best and more vocal players. Although he is one of the smallest players in the L he is one of the toughest and so long is he is out, this team is going to miss all that he brings on and off the court.

A Stocking Full of Confidence for Bargnani:

Its been a tough start to the season for the big guy and he has clearly lost all of his confidence. Now it is not that this guy ever showed much emotion in the past, but you never see him get too excited and he never says that much. His body language though is doing all the talking for him; he is hesitant when he gets the ball, his shot just looks off, and his energy just seems low. Tack on some bad rebounding and D, and if there is one guy on this team that needs to get away for the next day or so it is Bargs.

Now that he has bee re-inserted into the starting line-up it is a lot more likely that he gets his confidence up and gets things back on track. It also gives him and Bosh time to develop some must needed chemistry. Colangelo didn’t draft this guy to be a bench player and he needs PT to help him grow.

Hopefully playing with Bosh helps him regain his confidence. Defenses will be focusing on CB4 (or run the risk of 30+ point performances) and he will get some open looks. Of course Bargnani can’t expect things to turn around quickly if he simply settles for jumpers. He needs to get closer to the hoop and take high percentage shots. As his confidence grows he will be able to start nailing those ridiculous three’s once again.

A Streak of Good Luck:

This team has had it’s fair share of bad luck the past little while. The injuries have taken their toll this season. As a result there have been some moments when it has been glaringly obvious that certain players need more time on the court together before the team runs like a well oiled machine like the San Antonio’s of the world. The reality is we are one Bosh injury away from the lottery. Through the season Bosh, Bargs, Graham and Ford have missed action and Garbo is out for the year. The team is also facing the end of this brutal west coast swing right after Christmas and will be doing so short handed.

Of course as tough as the Raps have had, it other teams have it worse. The Nets have no excuse for their poor play other than they have Vince Carter, and neither do the Bulls who just fired their head coach. Speaking of Skiles firing does anyone else think it should be Paxon fired rather than Skiles? Paxon overpayed Ben Wallace, traded LaMarcus Aldridge for Stromile Swift version 2.0 (although 2.0 is no better than the original at this point in time) and has been reluctant to deal some young and over-hyped talent (i.e. Ben Gordon, amongst others) for legitimate NBA stars like Pau Gasol, KG and possibly Kobe (who knows if Kobe stopped the deal because Deng was involved). What more evidence does he need to know that teams who get the better player usually get the better deal. The only real positive for Paxon the past little while has been not over-paying Deng or Gordon in the off-season and finding nice second round value in the draft with Aaron Gray.

And I'm not going to get into the mess that is the Knicks situation... 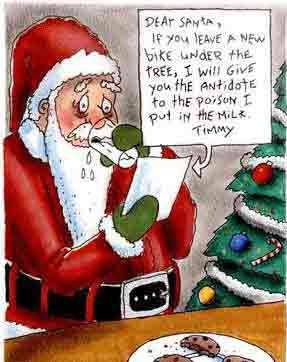 Ok...maybe we don't need the team to be THIS gritty...

I'm not saying the Raptors need a lump of coal in their collective stockings to get worked up - but this team last year played with a fire and passion that has only flickered this year on a few occasions.

Some New Technology In the Truck:

How is it we still miss live action for replays and shots of the crowd? This is professional broadcasting. A lot of the new graphics are great and HD Raptors games cannot be beat, but missing game action? Come on guys, pay a little more attention.

Last but not least he thing I want the most for this Raptors team is a clear vision. An identity if you will. Is this team going to be a up-tempo style team like Phoenix or a lock down defensive team? This team has been so inconsistent in almost every facet of the game that if someone asked you to describe the 2007-08 Raptors, you would have a tough time doing so. How would you describe this team? Maybe all you can say at this point it is that it is a team of above average shooters who occasionally show the ability to play some great defense but are more susceptible to defensive lapses. They rebound as a team...on most nights...and most of the time cannot get to the line. What is the biggest strength? What is their biggest weakness? If you ask five Raptors fans that question you would probably get 5 different answers. If there is one thing I want for this team it is some consistency.

Things have definitely been worse in Raptorsland in holiday seasons past, and the list of desires is not nearly as long as it once was, but if Santa has a little room on that sled of his here’s hoping he can find some space for the Raps.

Happy Holidays to everyone from the HQ!