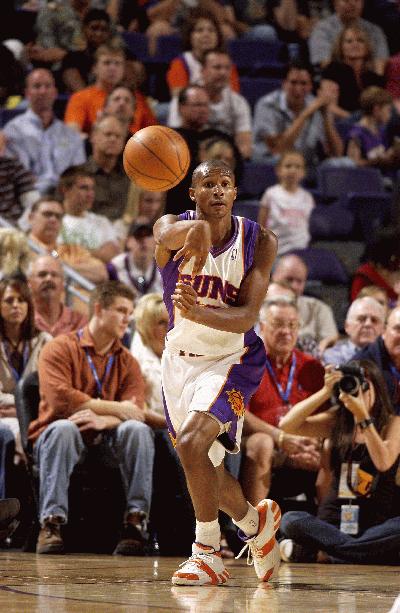 Andrea Bargnani got the start last night against the Suns and it looks like he’ll be in the starting lineup for the foreseeable future. As much as I think that Rasho is still a better starter at the 5 for Toronto, this move was a long time coming. If CB4 and Il Mago really are the future for this team, they need to get comfortable playing together and as I mentioned yesterday, Bryan Colangelo and co. also need to figure out if this isn’t going to work. The only way to do that of course is to get them playing together.

We’ll have to see how this works out. Sam Mitchell apparently spoke with Bryan Colangelo after the loss in Seattle and the two agreed that a change was in order:

"We just feel like we need to get Andrea going," said Mitchell. Rasho did what we need him to do, we're 15-13, but for us to get where we want to go and be the team we hope to be we all believe that eventually Andrea has to be the starting centre."

Andrea finished with 13 points in last night’s loss on six of 13 shooting but was not the main culprit in the loss. Once again it was Toronto’s defensive execution which allowed Phoenix to shoot 52 per cent from the field.

It looked like the Raptors had more than 10 assists last night but in any event, you saw first hand if you watched last night’s game just how important it is for the Raptors to help out Chris Bosh. CB4 did it all but because of Phoenix coach Mike D’Antoni’s refusal to double-team the young Texan, the Raptors didn’t get the open looks they normally do on the perimeter. And when they did get them, they just weren’t knocking them down. Dead-eye sniper Jason Kapono was an uncharacteristic three for 11 from the floor and as a result, Toronto played too much one-on-one last night for the team to be successful.

Surprise, surprise, the start of the third quarter. Toronto actually was within five at half but poor defensive rebounding at the start of the second half did them in. In the first half the Raptors generally kept the Suns to a "one and done" type of offensive display but in the third players like Amare Stoudamire and Shawn Marion reeked havoc on the glass giving
Case in point - Steve Nash with 2:30 left in the quarter out-rebounded the entire Raptor club and then found Barbosa for an open 3. Perhaps it was the road-weary legs but the Raptors just couldn’t match their first half intensity in the second and against such an explosive and rested opponent, that spelt doom.

Temperature Check:
Hot - Chris Bosh: As Raptors fans we are sometimes quick to jump on CB4 if he underperforms or fails to look to lead his team. Well last night Bosh did everything he was asked to and more for Toronto. He scored a career-high 42 points, grabbed 13 rebounds and got to the line 24 times making 22 of them. Unfortunately he got little help from his team-mates as Phoenix was content not to double and let CB4 get his.

Hot - Steve Nash: It’s going to be a sad day when Nash stops lacing them up. His ball skills are unparalleled and in the third quarter he showed them off time and time again, carving the Raptors defense into little pieces. He finished with 16 assists and showed once again why he’s so important to the Suns attack.

Hot - Leandro Barbosa: Barbosa has been in the habit lately of torching the Raptors and last night was no different. The "Brazilian Blur" had 31 points starting in place of Raja Bell hitting SEVEN of the 10 three-point shots he took. Toronto had no answer for Barbosa all night and while Grant Hill, Shawn Marion and Amare Stoudemire all played terrifically, Barbosa was the real Dino-killer.

The tough thing about this loss for me was that it just re-emphasized how bad the loss to Seattle the night before was. Had the Raptors given the effort they did last night against the Sonics, the outcome probably would have been a lot different. The Raptors defence still needs a lot of work, but you have to give Phoenix a lot of credit - they’re simply a much superior club at present and hit nearly every open look they got.

Sam Mitchell post-game mentioned that the Christmas break was coming at the right time and I have to agree. Had things ended after Seattle it would have left an ugly hangover but the team can take some solace even in last night’s loss. They finally got some solid offensive production from Andrea Bargnani, Chris Bosh had his best offensive game of the year, and even playing their fourth game in five nights, Toronto came out with the energy it needed to win this game. It would have been a lot easier to fold up shop and mail this one in like a late Christmas card, but Toronto put their best foot forward early on and made their best go of things.

With a few days off now for Christmas, it will be very interesting to see just how the Raptors come out against San Antonio. The Raptors have actually played well against the Spurs the past few years and hopefully will come out of the gate with some energy. Even more importantly, I’ll be keeping a close eye on the starting situation. Jamario Moon is bringing nothing to the table at present and hopefully he needs a rest and not a place back on the bench. Carlos Delfino hasn’t shot the ball that well but has brought other intangibles to court that the Raptors sorely need from their starters. And while getting Andrea and Chris on the court together is all fine and dandy, will this translate to wins if Bargnani doesn’t step up his defence and rebounding?

Bryan Colangelo joined Check and Leo in the first quarter for a chat and was obviously still high on Andrea’s potential in the league. He talked about Bargnani’s struggles but reinforced the idea that he and Chris were the team’s future and needed to play together.

Whether "playing together" means starting or just being the first option of the bench is another matter and if this team’s defence and energy to start games doesn’t improve and the losses keep piling up, we may hear BC singing a different tune.