3 In the Key - Toronto Raptors Game-Day Preview vs. Sonics

Share All sharing options for: 3 In the Key - Toronto Raptors Game-Day Preview vs. Sonics 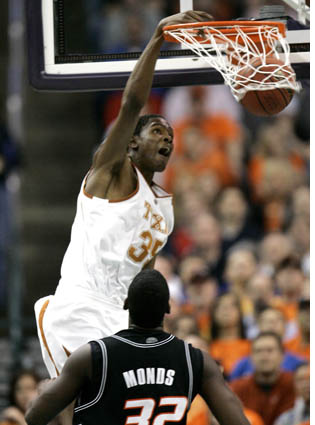 The NBA draft is one of the best "what if" scenario creators in all of professional sports.

What if Jordan had been drafted and not Bowie?

How did Arenas and Boozer fall so low? What if they had been scooped up by teams early in the first round?

And now of course we’re getting lots of the "was Andrea the right choice at 1?" talk.

This year could have added another chapter to the NBA Draft’s "what if" saga - Durant vs. Oden.

Of course Oden was injured and looks to be out for his entire rookie year but it would have been very interesting. Especially because the Blazers have been so successful without Oden and Durant hasn’t exactly looked like the second coming of MJ or the cross between KG and TMac that many thought. That’s not to say that he hasn’t had his brilliant moments - after all, he is still basically a teenager. But here at the HQ we thought instead of pure speculation, let’s get some takes from one of the websites that follows the Sonics closer than anyone else -

We asked Peter Nussbaum from Supersonicsoul his take on Durant as part of our standard "three questions with the opposing team’s blogger:"

1) RaptorsHQ - Kevin Durant entered the league with more hype than anyone since Lebron James and was heralded by some as a cross between MJ and KG. He's struggled shooting the ball at times, and hasn't been the runaway rookie of the year candidate maybe some expected, but give us your take...has he lived up to the hype and how do you see his career progressing?

Supersonicsoul - I think that it could be argued Durant hasn't lived up to the hype surrounding him, but that's because the hype was unrealistic. As long as he's making progress, I'm happy with him. As proof, look at his FGA/PPG: In October, he took 22 shots and averaged 18.1 ppg. In December, he's still averaging 18 a game, but it only takes him 15 shots to get there. Bottom line is that he's a 6'9" shooting guard/small forward who can hit 3s, shoots 80+ from the foul line, gets to the line about 6 times a night (as a rookie, I might add), and has a ton of ways to get points. Obviously, he needs to get bigger and work on his rebounding and defense. But if the draft were held today, he'd be the #1 pick overall, and I'm including Greg Oden.

2) RaptorsHQ: I think lost in the mess that is the New York Knicks, is that the saddest story in the NBA regarding a longtime franchise is the possible departure of the Sonics. As a huge pre-400 pounds Shawn Kemp fan, I'd be outraged to see the team move. For our readers who haven't been following the story - how real of a threat is the move and what are your feelings surrounding all of this?

Supersonicsoul - The threat of the Sonics moving is very real, simply because Clay Bennett wants to move and David Stern 1) likes Clay Bennett and 2) needs to keep the possibility of franchises moving viable, if only to blackmail other cities into caving into the demands of their teams. I would put the odds of them moving at about 40%, which is an improvement of the 60-70% I felt three months ago. There will be some info coming out in the next few months regarding a local proposal for a refurbished KeyArena, and that could swing the tide back in Seattle's direction. As much as Stern likes Bennett, he won't let the Sonics move if a decent arena is on the table in Seattle. Right? Right?

3) RaptorsHQ: Finally - onto tonight's match. What do you see as the keys to a Sonics victory?

Supersonicsoul - For the Sonics to win, they have to play someone other than the Raptors. Seriously, look at who the Sonics have beaten this year: Atlanta, Miami (in D-Wade's first game back), Milwaukee, the Clippers, New York, and Minnesota. The Heat will possibly make the playoffs, but the other five are playing golf next spring. If you've got Calderon on your fantasy team, I'd rush right over and put him in your starting lineup for the game, because there is no better way for a PG to rack up big numbers than to play the Sonics. Final score? Toronto 98-Sonics 89.

Thanks Peter, some great stuff and interesting point about the play at the 1 - which ties into our first key for a Raps’ W.

As you can see, the Sonics have had major problems when playing the league’s premier point guards and right now Jose Calderon is definitely among them. He has by far the best assist-to-turnover ratio in the league and is behind names like Nash, Kidd, Paul, and Davis in assists...that’s some pretty elite company. Therefore I’m not worried about Jose tonight, no, I’m SLIGHTLY concerned about his back-up.

News is beginning to trickle in that TJ Ford might not be as "ok" as was originally thought, a scary prospect not only considering the back-up option right now is Darrick "trigger-happy" Martin, but also considering Ford’s health in terms of his future as a player in the league.
Period.

As the Toronto Star article mentions, this raises some interesting questions for Bryan Colangelo who now may need to cut Martin and look for a legit back-up option as for some reason, Juan Dixon is wasting away.

I’d love to see BC make a play for Dallas’ JJ Bareas, a player who we wanted Toronto to grab in the second round of the draft a couple of years back. Dallas seems pretty high on him but maybe taking on one of their less than desirable contracts and shipping Dixon off to them, whose deal expires after the season, would make them bite.

Perhaps that’s not so realistic but what about this scenario which works financially:

The Raps take on Dan Gadzuric’s evil contract and grab point guard prospect Ramon Sessions from the Bucks in exchange for Joey Graham, Dixon and Maceo Baston. That clears space for the Bucks, and rids them of players they already have a surplus of. I don’t know about you but I’d much rather have Gadzuric’s shot-blocking off the bench than Baston’s occasional rebound.

Or looking at some other teams with a surplus of 1’s, a deal of Dixon and Graham going to Houston for Kirk Snyder and Luther Head would work under the NBA’s trade rules. Snyder and Graham are essentially the same player, Dixon would give the Rockets some veteran experience and scoring off the bench and moving Head would help clear up their logjam at the 1. Most importantly however, it would give the Raptors a nice change of pace point at the 1 who can knock down shots from long-range and play the 2 when the Raps go small.

And finally just for entertainment’s sake...

2) Get on the Glass. While Seattle is not exactly burning up the league on offense or defence, they are the third best rebounding team in the league. Players like Chris Wilcox, Kurt Thomas and Nick Collison are all excellent rebounders and Toronto has to make a concerted effort to box out. In addition, Sonics like Kevin Durant, Damien Wilkins and Jeff Green are all excellent rebounders at their respective positions and if Toronto doesn’t control the boards, easy put-backs could kill the Raps all night. Seattle is the fourth worst field-goal shooting team in the league so allowing easy scores in the paint off of offensive rebounds is a recipe for disaster.

3) Be aggressive on offence. As has been the trend all season, when the Raptors settle for jump shots and have little presence at the free-throw line, bad things happen. In their 12 losses this year, the Raptors are averaging a measly 16 free throw attempts per game. The Sonics are one of the worst defensive teams in the league allowing their opponents to score 105 points per game on average so Toronto should be able to have their way on O. However this means mixing things up on the attack and putting team-mates in a position to succeed.

After the Portland game Chris Bosh made some curious comments about the Raptors chastising each other too much. There still hasn’t been much clarification on this, but it seems that instead of encouraging each other in a positive manner, the club has been getting in a habit of criticizing each other after missed shots etc. This seems strange considering the great chemistry that we always see surrounding the team, and I think what CB4 was really referring to was the team’s lack of confidence when the chips are down.

Nuff said. Watching the game you’d have to agree with Bosh’s analysis as Portland, even when down, seemed to be the more confident of the two teams and the Raptors need to start playing with some swagger.

Do we need to bring Dr. Phil in folks?

Now if only we could give that former top pick of ours a dose of Durant’s swagger....