Share All sharing options for: Tip-In: Toronto Raptors Post-Game - Looking in the Mirror 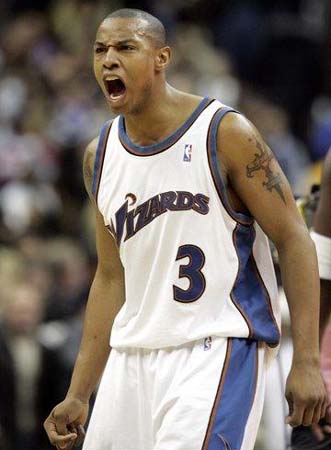 On a night when Earl "The Pearl" Monroe’s jersey was retired the Raptors sure could have used some of his ball-handling wizardry.

Especially to get to the rim.

Instead, without any inside presence whatsoever, the Raptors heaved jump-shot after jump-shot en route to a four point loss to the Wiz.

The interesting thing was that when I was watching this game I kept thinking "wow, if we never had Bosh and they never had Arenas, these teams would essentially be the same!"

Both can score with the league's best when the shots are falling and neither has much in terms of an interior presence or perimeter defence. The Wiz lay claim to a few extra All-Stars of course but these are two very similar clubs down to the styles of their respective coaches. Post-game Washington coach Eddie Jordan even made numerous Mitchell-esque remarks including going off on a tangent about the great job his team's sports psychologist does when the players are "pissed-off."

Um...I guess when you have Agent Zero, Andray Blatche and the tag team of Brendan Haywood and Etan Thomas on your club, comments like Jordan's shouldn't come as a surprise...

I’m getting pretty sick of putting numbers like this up in this section. But without Chris Bosh or a TJ Ford who’s back to 100 per cent efficiency, I’m not sure it’s going to change. As much as I thought TJ forced the issue last night, he and CB4 remain the main players on Toronto who can put easy points on the board with the clock stopped.

And this was really the difference in the end. Toronto lost the war of the jump shots but if they had gotten to the line 21 times like Washington, you can bet they would have hit more than the Wizards 13. In a game they lost by four, well...you can do the math.

Turning Point: There were a few twists and turns in this one but I felt that the game’s momentum really changed for good in the second quarter. The Raptors were rolling offensively, starting to get out on the Wizards’ shooters, and looking comfortably on their way to win number 10. Then the wheels started to come off. Bad passes, lax defense on the perimeter, and a Roger Mason Jr. explosion spelt trouble. Toronto never really recovered and while they got close numerous times, Washington ran variations on their screen and roll that kept the lead until the buzzer sounded.

Hot - Caron Butler. I’ve always been a huge Butler fan and it’s great to see him putting together another All-Star season...but not against the Raps! Butler started off on fire and the Raptors didn’t do a great job containing him all night.

Hot - Antawn Jamison. This is the other player Toronto had a tough time with all night. Jamison’s ability to play inside and out gave the Raps fits and he grabbed two key rebounds near the game’s conclusion to basically seal the deal.

Hot - Jason Kapono. It's great to see Kap-One start to hit his stride with this second unit. As mentioned before, he seems to have a great chemistry with Jose Calderon and Carlos Delfino and was really the lone bright spot tonight for Torontno. I'm hoping now Toronto looks to him more often and starts running some plays for the sharp-shooter from UCLA.

Cold - Andrea Bargnani. It’s almost 20 games into the season unbelievably and I’m starting to notice a trend with the Raptors. The only way this team has success is if their wings are shooting the lights out, or if they get some sort of inside presence going to open things up. You could see echoes of this in the first quarter of last night’s game. Toronto’s defence wasn’t great and Washington was getting some easy looks, but the Raptors’ offence was purring like a kitten. A big part of this was that Andrea was making shots and forcing Washington to double-team. Make no mistake - without CB4, Il Mago MUST be the number one option and must look to make Washington react to him. Unfortunately, after hitting his first few looks and being aggressive around the basket, Andrea got blocked by Jamison, appeared to injure his other knee on the awkward landing, and then settled for shaky looking jump shots the rest of the night. I realize he’s learning the ropes, but if this team really wants to take the next step forward towards becoming an elite club, Andrea needs to help carry the torch.

Cold - Sam Mitchell. This is the first game this year that I really questioned some of Mitchell’s moves. I’m not saying he cost them the game...but there were some things that stuck out in my mind.

First off, I felt he left TJ Ford in too long in the third quarter. Ford was forcing the issue all night and while I understand he’s trying to get back into the swing of things, it’s the coach’s job to recognize this and make adjustments. By the time Calderon returned it seemed too little too late.

Also, Washington played small ball almost all night. The Raptors followed suit but just didn’t seem to take advantage of any strategic mismatches. The jump shots weren’t falling so why not try something else? How about Hump backing smaller guys down? And if the Wiz want to go small, I can’t think of a better idea than to try using Joey at the 3 or 4 and get him to post up. In a case like last night’s game where the Raptors were basically facing a slightly more talented version of themselves, I expected more from the Toronto coaching staff.

What really hurts about this loss is that a win really would have had the momentum going towards Phoenix this Wednesday. Charlotte is up next Monday night but after watching them get beaten by the hapless Bulls tonight, I didn’t feel like they were a worthy foe for the Raptors. No, I was ready to see the Dinos play the kings of the West, as they will later this month.
Instead, as fans we’re once again left with that "what if" thought in our heads. If there was a time to play without Bosh and TJ it was now, against teams missing their respective superstars as well.

Toronto got part of the job done by beating Cleveland, but unfortunately last night, neither Morris Peterson nor Michael Ruffin were in the building...

Where's Michael Ruffin when you need him?