Share All sharing options for: Tip-In: Toronto Raptors Post-Game - Eight Too Many 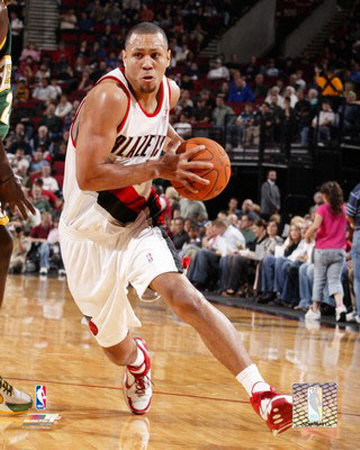 This for me was one of the tougher losses to swallow so far this season.

Both the Toronto Raptors and Portland Trailblazers were shooting the lights out, exploiting each other’s defensive schemes, and getting up and down the court. However the Raps were leading on the score board for most of the game as they were getting a few more easy looks and a few more stops.

With the way the Blazers were shooting, especially from downtown, and the way Brandon Roy was toying with whoever tried to guard him, it was clear no lead was safe. The Raptors needed to keep going with what was working for them, namely, Jose Calderon and Chris Bosh.

Unfortunately that didn’t occur and by the time Toronto went back to that strategy, the Blazers had pulled ahead for good.

Usually we take a look at the numbers on the night but I’m still so worked up about this that I’m going right to the turning point. And as some of you have already posted, it’s pretty obvious what I’m going to say.

Sam Mitchell played a big part in this loss.

No, he wasn’t forgetting to box out his man like in the game’s final crucial minutes. And no he wasn’t bricking open shots like Jamario Moon was.

But for some reason he decided to let Darrick Martin and Andrea Bargnani rot away for way too long at the start of the fourth quarter. Terrible shot selection, no ball movement, turnovers, you name it. And in the meantime, Portland put together a 10-0 run and by the time Bosh and Jose returned, the damage had been done, the momentum had swung and the Rose Garden crowd carried the Blazers through to the finish.

I was screaming at the TV when Toronto’s lead shrunk to five to take Martin out. You KNEW he was going to hoist up at least one bad shot! And hoist he did. Look, I’m not as big a Martin hater as some, I think he’s got his uses at times, but after a year plus of watching him play, you know his tendencies. And Mitchell coaches the guy every day so he should know better than anyone! Why he didn’t just pull the plug and put Jose in, who was shooting the lights out I might add, is beyond me. Inexcusable and I hope post-game some of the local media quizzes him on it. (I don’t have RaptorsTV right now so if someone catches the interview let me know.) Martin played 13 minutes in this one but in my opinion, that was about eight minutes too long.

Ok...feeling a bit better now - onto the numbers.

Yep, broken record time. This was the number of foul shots Toronto attempted on the evening - no excuse. Chris Bosh is still not being aggressive enough in the paint but he’s also getting zero help from his teammates in this department. Carlos Delfino and Jamario Moon both have the ability to cause damage in this area - but both were pretty invisible. Until the Raptors start making a concerted effort to get there consistently, I think this team will continue to be up and down in terms of wins and losses.

Hot - Jose Calderon. Calderon has been so efficient overall this season, that he doesn’t get enough game-in-game-out love in this section. Well once again he was superb for the Raptors leading the team in scoring with 19 points and dishing out nine assists. His game control is one of the best in the league, his shooting has improved tremendously and without him last night, it wouldn’t have been close.

Hot - Brandon Roy. Roy terrorized the Raptors all night hitting clutch shot after shot. He can do it all and his right to left finish was one of the best plays I’ve seen all year. This is a good looking Portland club and Roy is one of the main pieces of the puzzle.

Hot - Kris Humphries. Anyone else blown away by Hump? Here’s a guy who was possibly on his way out of the league before Toronto traded Hoffa for him and now he’s become a key player for the Raptors, regularly coming off the bench now to score 10 to 13 points and grab five to seven rebounds! Sure Hump isn’t winning games single-handedly, but without him these past few, it’s safe to say that Toronto wouldn’t have won or wouldn’t have been able to keep things close. He needs to make a few more foul shots, but you really can’t complain about the production he’s giving the team.

Hot - Jason Kapono. Kap-one had another nice night off the bench with 13 points on six for nine shooting. However what’s impressed me the most about him lately is that he’s looking for his own shot more and looking to create instead of just looking for a set-shot. The problem is that Toronto still doesn’t look for him enough on offense. He’s so automatic that it’s a cardinal sin not to try and get him open looks on almost every possession. Hopefully as the year goes on Sam Mitchell will figure out how to use him more effectively because with the way he’s shooting, he could really be a boost to this inconsistent Toronto offence.

Detroit did its part by beating Boston.

Chicago did its part by beating Washington.

Hell the Knicks even beat the Cavs so Toronto had a great chance to either gain some ground or put some more between themselves and some of their more likely playoff opponents.

Instead, they let this one get away and will now have a day to ponder the loss before heading into a back-to-back with Seattle and Phoenix.

It’s no doubt a tough stretch of games but in the end, I’m just not sure what Sam Mitchell was saving Jose and Chris for. Shouldn’t your best players play the most minutes, especially when their team-mates are ineffective? Brandon Roy played 40 of 48 for Portland while Bosh and Jose played only 33 and 35 respectively.

I’ll finish though by saying that not all the fault can be laid on Mitchell. There were some terrible calls by the referees again (especially Bosh’s non-existent charge near the end), some major defensive lapses (how no one got out on Roy when he’d just hit two 3’s in a row I’ll never understand) and some more missed opportunities on offence.

And in the end that’s what this game definitely amounted to - another big missed opportunity for the Raptors.