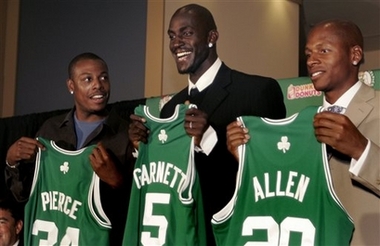 I decided to wait a while before typing this recap.

Part of the reason was because I was storm stayed in an airport in Halifax.

The other was because I found myself nodding in agreement with 99.9 per cent of our readers who posted after the game about various topics. I’ve decided to take some pieces from various posts and discuss, so let’s take a look:

What people sometimes forget about the Celts is that they are a veteran team. So the Big 3 haven't made the finals, they've all had long runs -- and Posey won with Miami, Pollard made the finals with Cleveland and went far with the Kings, House went far with Phoenix and even Scalabrine went to the Finals with NJ.

1) The Celtics are a very good veteran team.

I’m not saying I like them, hell I’m starting to develop a passionate hate for a number of their players, but you can’t take away from the fact that this team is ready to play each and every game. Danny Ainge has put together an experienced and well-balanced attack and just like Michael’s Bulls with the Pistons, it may take some time before Toronto gets the seasoning it needs to beat this team on a consistent basis.

I’m not ready to concede that the Celtics will have our number for the rest of the year, but simply put, this is just a much better team right now, especially at the defensive end of the court.

Boston brought to the game an intensity that Raptors could not match and they couldn’t have been more ready for them. There were times that they were manhandled and the Raps did not respond. Get angry, get in someone’s face but don’t walk away.

2) The Celtics are a much better defensive team than I ever imagined. They are also a lot more aggressive.

One of the first things I noticed in the first quarter of yesterday’s match was how tough it was for Toronto to get clean looks at the basket. Toronto was absolutely smothered from the opening tip and even more-so when Chris Bosh was off the court. We saw the direct result of this in the second quarter when Boston jumped ahead for good. Post game there was a great quote from CB4:

Without someone to draw in the Celtics defenders, Boston has the individual athletes to provide excellent single and help coverage on the Raptors’ shooters making Boston a nightmare of a match-up for the Dinos.

Watching the game reminded me of the Bulls teams from two seasons ago that always terrorized Toronto. They had lightning quick outside players like Ben Gordon and athletes like Luol Deng and Toronto just didn’t match-up well. Boston is our new Chicago and until we get more penetration from the likes of Jamario Moon and Anthony Parker, I’m worried they’re going to have our number.

This brings me to the next observation...

...And the Raps really could have used T.J. today. Rondo was killing Calderon all game long.

Rajon Rondo sliced Toronto apart in the first half and really opened things up for the rest of his teammates. Ford has the same ability but is a better overall shooter and it’s no coincidence that the one game that Toronto almost had over Boston was the one in which TJ went off offensively. His penetration ability just adds another important dimension to the team and as great as Jose Calderon has been playing, that whirling dervish gig is just not his style. Having Ford darting into the paint forces Boston’s defenders to move around much more on D so that Boston can’t just camp out guarding the perimeter. That’s pretty much what they did in yesterday’s game as I lost count of the number of times the ball went left around the perimeter, then, as nothing was there, went right until it was time to heave up a shot to beat the clock.

the Raptors are not tough enough (mentally and physically)…

I’m sure for the rest of the regular season the team’s offense and defense game will improve and they will win their share of games and finish behind Boston but unless they meet another finesse team in the playoffs I don’t like our chances.

4) This team needs to get angry.

Perhaps I’ve lived in the great white North too long and have adopted a slight hockey mentality, but I’m getting sick of watching this team get pushed around. It may come with time, but besides Hump here and there, and Carlos Delfino, who was Toronto’s best defender yesterday as Pierce abused Parker and Moon, there’s no one on this team with much of an edge. I’m not saying we need to rush out and get Ruben Patterson, but the C’s banged Toronto around quite a bit yesterday and the Raptors did little banging back. KG is probably one of the nicest guys in the league off the court, but on-court he’s all business and this echoes through the rest of his team. Toronto needs to start gritting their collective teeth a bit more and until this happens I agree that we’ll struggle against teams with bigger cajones.

This Boston game? Yup, agreed with Bosh: take away from this a schooling in defence, and keep plugging away at figuring out Boston. Not really worried about it.

5) Yes, Toronto is not on the same level as Boston. That doesn’t mean they can’t keep improving and have a tremendous season.

Hopefully the Raptors got out of Toronto last night and on their way to LA as they’ve got a real test of games coming up.

This will take Toronto up to New Year’s and by then fans should really have a good indication of how the season is shaping up. I truly believe that Toronto can win five of these seven but even four of seven would keep the team in good shape heading into 2008.

The key though is to learn from this loss to Boston without putting too much stake in the end result. The Celtics are definitely the superior team at present and the Raptors simply need to keep working on taking their game to the next level as well. Even in the loss there were some very positive signs so I’m hoping the Dinos don’t dwell on things too much.

-Carlos Delfino is improving with each game and it wouldn’t surprise me to see him starting at the SF position at some point on this road trip.

-Chris Bosh looks to be showing no ill effects of his groin injury and is carrying the team on his shoulders much like he did last year.

-Jason Kapono is living up to his off-season promise and simply needs to get some more open looks.

-Kris Humphries has been a revelation off the bench that past few games, doing the dirty work inside, rebounding the ball and hitting shots.

-And most impressively, the Raptors have been finally getting to the free throw line with more regularity. This was one of the reasons Toronto wasn’t down by 40 points after the first half of yesterday’s game and I’m hoping this commitment to getting to the rim manifests itself out West.

As for Andrea, I’m not sure what to say yet. Some are jumping on the "bust" bandwagon already but I just think he’s completely lost in Sam Mitchell’s rotation right now. He’s a "flow player" as one of our readers alluded to and playing eight or ten minutes a game out of position just ain’t working. Bargs at the top of his game, not to mention a healthy TJ Ford, would give the Celtics all they could handle.

But until then, I’m dropping all the rivalry stuff.