3 In the Key - Toronto Raptors Game-Day Preview vs. Celtics

Share All sharing options for: 3 In the Key - Toronto Raptors Game-Day Preview vs. Celtics 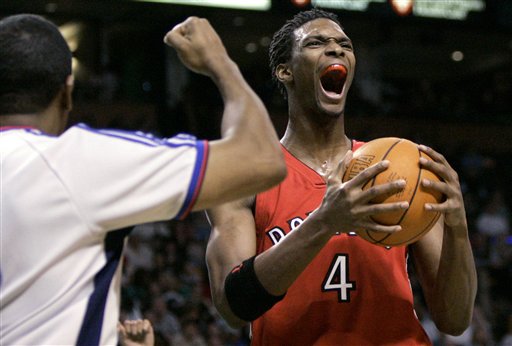 Just a quick on today as I’m stuck at Pearson Airport with limited internet access however hopefully things get cleared up so I can see the game...

I think things will clear up a bit for the 1 PM Eastern start and the Celtics are already here so the main issue may just be getting fans out to what was undoubtedly a sold-out affair.

On the personnel tip - got word last night from Jeff at Celticsblog that Ray Allen wasn’t making the trip. This is obviously a big boost for Toronto as Allen’s outside shooting killed Toronto the last time two times these teams have met. All the same I would have liked to see a full Celtics squad against a full Raptors squad but we’re missing TJ as well so maybe we’ll just have to wait till Round 4.

Keys to the game?

Well first off the Raptors regardless of the crowd size need to start strong. This team came out flat against the Pacers and can’t afford to do the same against a much better defensive team in the C’s. Jamario Moon hasn’t been as effective lately as he was earlier in the season and Toronto needs a solid performance from him, especially on the defensive end, today. His energy is a huge boost to the starters and I’m looking for a rebound game from him today.

Second, Toronto needs a solid inside presence from Bosh, Humphries and Rasho both on the offensive and defensive ends of the court. On O, this should open things up for Parker, Delfino and the blazing hot Jason Kapono. On D, this should limit KG’s effectiveness putting much more pressure the outside shooters, especially considering they’re missing Ray Allen.

Finally, I’m hoping to see Toronto get out and run. If the Raptors let the Celtics hunker down in the half-court, it’s going to be much tougher for the Dinos to effectively run their offensive sets and play the style of game that suits them best.

Looking at the stats for both teams, it’s interesting how close they both are in a number of categories. The one big advantage Toronto has on paper is in the turnover category so I’m looking for the Raptors to force their style of play, and pressure Boston’s ball-handlers.

Make no mistake, even without Ray Allen a win would be a big statement for Toronto. It would be their fifth win in a row and would cap off a great string of victories. The rest of the league is still talking Boston and Orlando and a win would open some more eyes. Last night during the Nuggets/Spurs match the commentators talked about Boston’s next game being against Detroit with no mention of today’s contest. I think the Raptors have the talent to be mentioned in the same breath as Boston, Detroit and certainly Orlando so I’m looking for them to go out this afternoon and prove it.