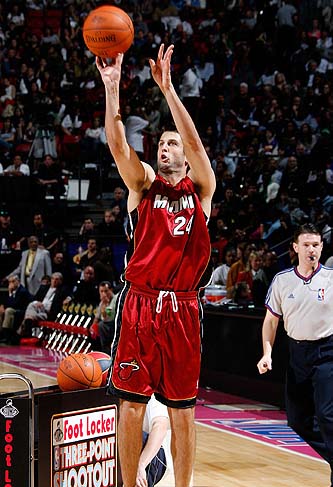 Jason Kapono may have lost his South Beach tan, but he sure hasn’t lost the shot that made him the Raptors most coveted off-season addition.

Kap-One was unreal last night in the Toronto Raptors comeback win as the Dinos clawed back from a 17 point third quarter deficit to snatch the 104-93 win from the Indiana Pacers.

I’ve seen some unconscious 3-point shooting performances in my time at various levels of basketball; Mark Price, Ray Allen, John Starks, Steve Kerr, JJ Redick, Reggie Miller – and Kapono in yesterday eve’s game was right up there with the best of them. Maybe it wasn’t the biggest stage to hit them on, but it was no less impressive. I mean at one point he wasn’t even catching the ball, he was basically volleying it at the basket and swishing it!

And it wasn’t just that Kapono was unstoppable from beyond the arc, his teammates did a great job of looking for him in the flow of the offense and he rewarded their faith by killing the Pacers from long range hitting six of seven 3’s. I’m the first to admit that I thought paying as much as Toronto did for Kapono was a mistake by B.C. but after last night, I’m left wondering if he’s not perhaps under-payed! More than anything though I’m just glad that he’s now playing with this second unit. It negates a number of his defensive deficiencies and while I never liked him in a starting role, he’s a perfect fit for off the bench assassinations.

Of course for those who saw the game, they know that Al Kapono wasn’t the only story in this one. Chris Bosh carried the club on his back until the late third quarter when his teammates started to step it up at both ends. And once again the Raptors used defence to get the job done while they were still finding their offense holding the Pacers to 43 per cent shooting for the game.

The Indiana Pacers are one of the better rebounding teams in the league and the Raptors won the battle of the boards 46 to 41. Chris Bosh had 16 rebounds himself but part of the reason Toronto won this game was because every single Raptor who played last night had at least one rebound. No, the Raptors don’t have the luxury of a boards specialist like Reggie Evans or Chris Kaman, but when the entire team makes this sort of effort on the glass, they can compete with any team in the league.

Toronto got to the line 23 times while Indiana got there on only six occasions.

When I spoke in the game-day preview about E & E – energy and effort, this was the type of performance I expected. The first half provided little of it but as Chris Bosh mentioned post-game, his team knew at the half that they were sleepwalking and had to step it up. The rebounding and free-throw shooting numbers were a direct result of this increase in focus and vigor and by the time the game reached its final minutes you’d hardly know the Raptors had ever been behind in the score.

Sometimes in games it’s hard to pin down an actual turning point in a game. Teams go on runs and with the ebb and flow of the game it’s sometimes tough to pick one sole event that may have turned the tide. Not the case last night.

When Carlos Delfino stole the ball from Jamal Tinsley in the fourth quarter and then promptly turned it back over it looked like another nail in the coffin for Indiana. Instead, Carlos Delfino tracked down the play and from behind, spiked the Pacers’ lay-up attempt off the glass allowing Toronto to go the other way. Jason Kapono then promptly hit a three pointer and after that, the team never looked back.

Hot – Jason Kapono. Kapono needs his own section in this recap. In the second half of the game I swear he was living in the arcade version of NBA Jam as he was indeed "on fire!" The best part too may not have even been him hitting shots, but the RaptorsTV camera crew catching Jamario Moon reenacting Kap-One’s smooth shooting from the bench.

Hot – Jamaal Tinsley. While he missed his two free-throw attempts which hurts my fantasy team, Tinsley killed the Raptors all night. Much like Jose Calderon right now, Tinsley is the engine that makes his team go. He finished with 19 points, 10 assists, five rebounds and two steals on the night but just didn’t get enough help when it counted from the rest of his team.

Hot – Kris Humphries. Humpty Hump just keeps on rolling along. In the first half, he and Bosh were the only two Raps who brought the necessary energy to the court and helped keep things within striking distance. Humphries had but five rebounds in the match but his presence gave the Raptors the toughness they needed down low and his defense on Jermaine O’Neal was huge in deciding the game’s final outcome.

"People say you look like Moses Malone on crack Humpty!"

Hot – Chris Bosh. Everyone post-game will be talking about Kapono, Humphries and Calderon. But CB4 is the reason Toronto was even in this game. Bosh finished with 22 points and 16 huge rebounds and did a nice job of scoring when the team needed it and drawing the Pacers D in to get open shots for his white-hot shooters at other points in time.

This was in my opinion the team’s best win of the year.

They were severely outplayed in the first half and began to face what looked like an insurmountable lead.

But like last year’s squad the team refused to roll over and showed more fight than they had in previously similar matches like Boston and Orlando. My girlfriend mentioned that last year, no matter the lead, she felt the club could come back and seize the victory. However last night was the first night she had gotten a similar feeling and I had to agree.

Indiana did a great job disrupting Toronto’s offence, especially on the pick and roll and as Indiana’s lead continued to grow in the second quarter I found myself pining for TJ Ford. Tonight’s match was a great example of why both are so important to the club. In games when the opposing team has an effective defence for the Raptors pick and roll sets, Toronto’s offence struggles. This was overly evident tonight and the problem is that besides Chris Bosh, no one else can create their own offence off the dribble besides perhaps Carlos Delfino. But TJ Ford excels in these types of situations and would have been a great counter-attack for Toronto. His disruptive darts into the paint open things up for his teammates and represents a great change in pace from Jose. Don’t get me wrong, Jose turned in another upper echelon game (18 points, 16 assists, five rebounds – who needs Jason Kidd?) but for the most effective 1-2 punch, I’m looking forward to TJ’s return.

Unfortunately the Raps won’t have Mr. Ford for this weekend’s match against the Celtics. Instead, they’ll need to once again rely on a complete team effort to clinch a victory from the top team in the league.

With Boston, Detroit and Orlando winning last night, Toronto is keeping pace with the East’s top clubs and Sunday’s match is shaping up to be a real nice contest to help determine Eastern Conference supremacy.