Share All sharing options for: 3 In the Key – Toronto Raptors Game-Day Preview vs.Pacers 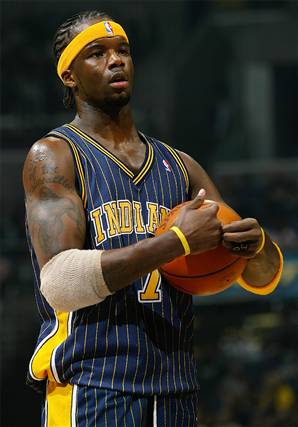 The NBA never ceases to amaze me.

One minute Penny Hardaway is making a triumphant
return to the court, the next he’s being cut for Luke Jackson.

Not so long ago Ruben Patterson was the self dubbed "Kobe stopper," now, he’s on waivers.

And a kid who spent most of the night at a hospital worrying about the guy he unintentionally injured, gets suspended for a game.
I’m not going to dwell on this suspension but I don’t understand it at all. Horford clearly didn’t intend to injure TJ and the flagrant 2 foul should have ended the affair. After the 93rd replay I’m not even sure the call should have been a flagrant 2 as Horford was trying to get the block, but got faked out of his shorts by Ford. In addition, Ford himself has repeatedly stated that Horford's foul wasn't a dirty play. If anyone should have been suspended, it should have been Eddie Jones, whose foul Wednesday night on Darrick Martin was more of a flagrant 2 type foul than Horford’s and was a ridiculous attempt at a "basketball play."

In any event, the beat goes on so they say.

The Raptors find themselves on a small hot streak and only three games out of second in the East heading into tonight’s match against the Pacers. Indiana has proven to be no slouch either this year under new coach Jim O’Brien and sits only two games back of Toronto with a .500 record. Toronto took the first game of the series back in November but Indiana was in the midst of a six game losing streak and just working Jermaine O’Neal back into the action. I expect a different Pacers club tonight, especially at home.

Last night on Hoops, the Pacers FSN commentator Chris Denari called-in to talk about this evening’s match-up and commented on how similar these two teams are.

Both like to get out and run, both can light it up from long range, both have an athletic power forward down low and both have a point guard (two in Toronto’s case) who pushes the tempo and likes to get involved in high speed chases with guns...

...ok, so the similarities end there.

The interesting thing is that Denari worried about the Raptors long-range shooting, something that’s apparently killed the Pacers all year. Looking at the stats that seems to be the case and that is then our first key.

1) Guard the 3-point line. The Pacers rank 27th in the league in points allowed. They’re allowing teams to run up 105.2 points on average on them and on top of this, are allowing opposing clubs to hit almost eight (7.5) 3’s a game. Only two teams are worse in this regard, Washington...and Toronto. It’s no stretch then that whoever does a better job guarding the perimeter this evening, may indeed have the upper hand when all is said and done.

2) Transition Defence. Like Washington and Phoenix, Indiana excels at turning rebounds and steals into transition baskets. Anthony Parker talked after the win against Dallas about the Raptors struggles against teams that play this style so it’s obvious that Toronto is well aware of their shortcomings. I’m looking for a repeat of the past few games in terms of the Raptors’ defensive performance and if the Raptors
can limit the Pacers’ ability to get out and score on the break, this should play right into their hands.

3) Energy and Effort. Having work experience in the Federal Goverment I'm tempted to develop a new acronym for this – E and E. Kris Humphries, Darrick Martin, Carlos Delfino and Jason Kapono brought this Wednesday night and were the main reason Toronto ended up with the win. The past three wins in fact Toronto has gotten this from most of the club, starters and bench, and when this happens, the Raptors are a very dangerous team. You see this effort and energy translate into things like Toronto’s aggressiveness on the glass and ability to get to the free-throw line etc, both big pieces of getting a win tonight, so let’s hope the Dinos’ collective tanks are running on "full."

The final thing that should be mentioned of course is that looming on the horizon is Boston on Sunday. I really don’t think the Raptors can afford to look past tonight’s match and hopefully they are therefore honed in versus Indiana. The Pacers have the scoring ability from inside and out to blow this thing wide
open so this needs to be a complete team effort once again.