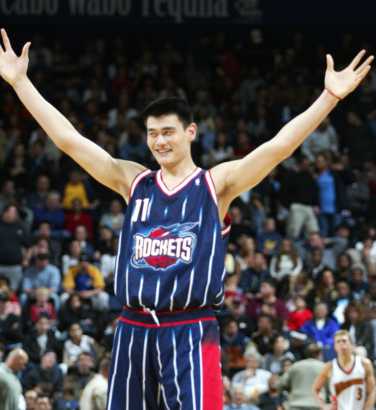 Lacing Them Up: Coming off a poor two-game slide, the Toronto Raptors were looking to get one at home against the Houston Rockets. And things looked to be starting off on the right foot as CB4 was ready to lace them up and get back onto the hardwood. This was just what the doctor ordered as CB4's return could not have come at a better time. Let’s face it, this team needed a lift.

On top of CB4's return the Raps are doing all they can to take advantage of the Sunday matinees, now having moved the traditional start time from 1:00 to 12:30. That’s right folks if you are on the West Coast after a Saturday night you will likely sleep through a Raps home game on Sunday. Man, 12:30 is even early here for those with Christmas parties and the like this time of year.

With Bosh’s return the questions that had to be asked were whether CB4 could be effective and how many minutes would he log. The other big question was how the Raps were going to stop the giant Yao Ming.

There’s no question that the Rockets are a solid rebounding team. Alongside Yao the Rockets front-court includes a bunch of players with a nose for the ball. Chuck Hayes, Luis Scola, Bonzi Wells and even Shane Battier are above average rebounders and if there was one major concern heading into this game was the likely rebounding differential. That major concern actually became a major advantage for the Raps as the home team out-rebounded the Rockets 48-35 and 18-8 on the offensive glass.

You can’t say enough about those 18 offensive rebounds. On a day where the Raps shots were not falling early, the second and sometimes third chance points were essential to staying within striking distance and then helping them get over the top. Bosh’s return obviously helped in this regard as he had a double-double but it was the supporting staff that really helped pave the way to a Raps victory. Delfino had 8 rebounds, an energized Humphries had 9 and Rasho, who played a real nice game on both ends of the court, had 7. This effort makes you realize that the Raps do have the size and players to stay with some of the better rebounding teams, the question is whether they can do it on a regular basis.

The other big number that jumps off the page is 10. That’s the number of shots taken by Ming. For as much as we can praise the Raps today for shaking off a slow start and getting the much needed win, some of the credit has to go to the Rockets for playing some of the dumbest basketball I have seen in a while. Out of the gates the Rockets went to Yao and the offense ran smoothly. Having gathered a nice (albeit far from safe) lead they went away from the most dominating centre in the league. Why? Did this giant of a man just become invisible? Does he carry a Harry Potter invisibility cloak? It was astonishing how Yao essentially became a non-factor in the second half of yesterday’s affair. As a Raps fan it was great to watch and I kept asking myself when the light was going to go on...hoping that it never would. As a Rockets fan this has to be concerning. Not only did they go away from Yao but it seemed like Adelman didn’t either (a) care, or (b) notice.

There were a few turning points in the game for me but clearly the statement was made when Bosh turned T-Mac away with the sick block on the break. There was no doubt that Houston’s lack of focus had cost them a winnable game.

You have to wonder what the end result for this Rockets team will be. There are some new faces on the team, including Mike James, Steve Francis and Luis Scola and they are clearly still trying to find their roles. They obviously have a ton of talent but in such a talented Western Conference they have a lot of jelling to do before they can be considered a threat. The PG position has to be a serious concern as none of their current options are good enough to help this team get to the next level. Watching the game I couldn’t help think that Calderon would be the perfect fit on this team. Let’s hope that doesn’t happen though.

Speaking of Calderon, he has definitely been my MVP for the Raps thus far. Whether he has been starting, off the bench, crunch time or garbage minutes he has done everything that has been asked of him and done it with a smile. He has stayed healthy and he also has not let the Garbo issues affect his play in any way. I know there is a lot of ball left but Colangelo has to be thinking about his impending free-agency, along with having TJ Ford locked-in long term and what the best case scenario will be by say Feb’s trading deadline.

Hot: Humphries. Solid game by the bruiser. On top of throwing down from a distance I never thought he could make, he did an excellent job mixing it up in the paint, throwing his weight around and just getting it done. Hump also managed to stay out of foul trouble which is key for him. His four offensive rebounds were huge and it is nice to see some solid production out of one of the big men that start the game on the bench. He is still growing as a player and very raw. You have to like the long-term signing at reasonable dollars a lot right now.

Cold: The Houston PG Situation. This is an ugly situation right now. Mike James is a poor fit for this offense, Steve Francis is a shell of his former self and is doing his best impression of a Jalen Rose fall from grace in record time, and Rafer is just not a PG that can get you to the next level. At the end it will be the guy who realizes that Yao Ming is not to be ignored in any circumstance that will log the most minutes. Man this team is just screaming for a pass first point guard.

Hot: Carlos Delfino. Try a +30. New hair cut and all this guy played an amazing game and Sam Mitchell was quick to recognize it when pulling Jamario Moon less than two minutes into the second half to get this guy on the floor. He is becoming the swingman this team has been missing for a number of years. Yes he can shoot, but he is also more than willing to go to the rack and get in on the glass. Joey Graham could learn a thing or two from this guy. The worst part is he, like Calderon, is also an unrestricted free-agent at seasons end. Are there two more valuable guys to this team right now?

Moving On: Great to see the Raps pull this out and now it is crucial to build on the momentum. Up next is the Atlanta Hawks who continue to struggle despite their solid talent. The Raps stepped it up against a stronger opponent and now it will be essential not to play down to their next.

With CB4 and Ford back in the mix it shouldn’t be too long until Bargnani finds his way back onto the court. It will be a sight for sore eyes when the Raps can put their full squad on the hardwood and start to develop, or re-develop some chemistry.