Tip-In: Toronto Raptors Post-Game: When the King’s away.....

Share All sharing options for: Tip-In: Toronto Raptors Post-Game: When the King’s away..... 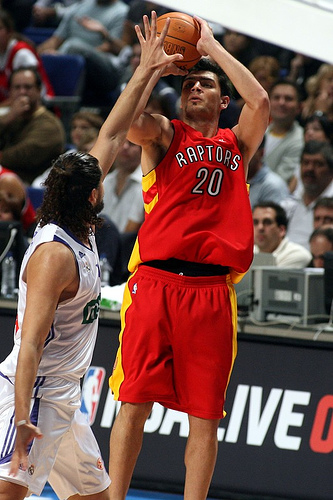 Lacing The Up: The question on everyone’s mind was who was going to lace them up for the Friday night tilt at the ACC. With so many bumps and bruises on both squads you couldn’t help wonder if the fans were going to be subject to some less than stellar ball. When the players lined-up for the national anthems two very familiar faces were not in their respective uni’s - 2003 class-mates Lebron James and CB4.

Immediately after having learned that the two franchise players were out you had to think Toronto had the advantage. This was the perfect time for the Raps to show their depth and it was a great opportunity for someone to take their game to the next level. The question was who would that be. With Bargs able to go he seemed to be the number one option to lead this team to victory, and that’s exactly what he did, bruised knee and all.

He did however, get some solid support.

This game was brought to you by the number 5. That’s the number of Raptors who had 6 or more rebounds on this evening. Matched-up against a sizeable Cleveland team, as Franchise mentioned in the preview the Raps needed to do a much better job on the glass than the last time these teams met. The Raps did just that with a gang rebounding mentality. Players like Parker, Delfino and Moon rose to the challenge and helped the Raps win the battle on the glass.

Of course it wasn’t just the glass where the Raps brought a gang mentality. They also brought it on the offensive end moving the basketball. With assists from seven different players the Raps had a substantial advantage in this category as well (24-13). Obviously the bulk of those assists came from Calderon (10) and TJ Ford (6), who made his first appearance since injuring his elbow. Although Ford’s minutes were limited and his shot was a little rusty it was great to see Ford back on the hardwood.

Speaking of TJ and Jose let me get on my soapbox for just a minute. I think it is way too early to start with the whole, "See look how well Calderon is playing, he should start talk". I have never been a fan of players losing their jobs due to injury and while I completely agree that Calderon has played extremely well in Ford’s absence isn’t this exactly what he should be doing? This is the precise reason this team has two strong PG’s. If one goes down the other is there to pick-up the slack and the teams level of play won’t fall-off. It is also totally irrelevant to me who starts. All I care about, and I would argue that all anyone should care about when it comes to this issue is (1) that Mitchell takes full advantage of the situation and ride’s the hot hand; and (2) that we don’t lose this guy for nothing at the end of the year. The reality is that provided Mitchell takes cares of point (1) then (2) becomes less of a concern.

The Turning Point:
There really wasn’t a true turning point in the game last night so let’s talk Lebron James instead. I was fortunate enough to sit directly behind the Cavs bench last night and it is unbelievable the presence this guy has and you can see how much his teammates respect him. I have no doubt that the NBA should be building it’s image around this guy. He is so young, so good and such a character. Watching him interact with his teammates he is clearly the leader of this team. Hell, I actually think he could be a player/head coach by the age of 25. Despite being injured, unlike many NBA players who spend the whole time searching for hotties in the stands (more on that in a second) when they are on the bench, Lebron is into the game and focusing on what is transpiring in front of him. It’s almost Jordan-esque. On the flip side he is also quite the character, able to make his teammates laugh and relax. I don’t think it is hype....I think we are witnessing something never been seen before.

Now, one of the interesting things about sitting behind the bench is you get to really see what the players are up to. One player in particular (to remain nameless....but he wore a Raps jersey at one point) spent the better portion of the fourth quarter using "mop-girl" to relay messages to an attractive woman in the stands. Not only is "Mop-girl" there for both cosmetic and safety reasons but apparently she also plays matchmaker!!! Over the course of ten minutes she continued to run back and forth between "the player" and the "fan" and it was blatantly obvious that they were trying to hook it up. We were some of the last people to leave at the end of the game and the "fan" was patiently waiting with her Cavs jersey under the stands. It’s hard to describe how funny this was to watch in person. You’ll just have to trust me.

Hot: Delfino. This guy is in the zone right now. He is doing exactly what you want from a guy off the bench. Hard defense and contributing in all facets. Delfino had another strong night shooting and he, along with Bargnani were the two guys who really stepped it up. The best part about Delfino’s game right now is not that he is managing to hit from the outside but that he is not solely relying on the outside shot. Delfino (who looks like the Tasmanian Devil to me for some odd reason) has been making a concerted effort to get to the hoop. He has become a huge asset to the team and is reason one why this team is not missing Garbo as much as it could be.

Luke-Warm: Drew Gooden. This guy is brutal. If you didn’t see the game last night and you are only looking at the box score it looks like Gooden had a solid game. He did, for the first 24 minutes and then he completely and totally disappeared. The thing is I totally expected him to disappear. Gooden has the talent but he reminds me of Tim Thomas in terms of heart. There’s a reason he didn’t find a home in the NBA for a while, and please Drew shave that beard! He looks like Tom Hanks in Cast Away, and that is clearly not a good thing.

Hot: Super Jamario. Ladies and gentlemen we now have the new fan favorite. Whether it was JYD, Matt Bonner or someone else Raps fans have always found a player to fall completely in love with and Moon is clearly it. Rightfully so. His athleticism is off the charts as evidenced by his sick block and thunderous slam last night (ignoring the fact that both happened after a whistle). The "Moooooooooon" chants are in full swing. If only they could get the music from the first Super Mario brother’s game to play at the appropriate times.

Seriously....does anyone have better hops than Super Mario?

Moving On: No rest for the Raps as the month of December kicks off with a match-up against another Eastern Conference squad missing it’s franchise player, the Washington Wizards. Perhaps not surprising it is going to take another full team effort to make it four wins in a row. Without further adieu here are tonight’s three keys:

Bench Play: Make no mistake, despite all the hype around the Wizards and their definition of the big-three, there are some talented players on this team. The problem is they are not on their bench. Provided their starting line-up is Daniels, Stevenson, Butler, Jamison and Blatche that leaves little on the bench. The Raps absolutely must take advantage of this and I will be carefully watching during those late minutes of the first quarter and early second to see if the Raps can get on a run and start to pull-away.

Perimeter D: The Wizards have little inside presence and there will be a lot of pressure on the Raps wings to keep guys like Jamison and Butler away from the rim. The Raps have to make the Washington team a jump-shooting squad. Considering how players like Moon, Delfino and Parker have defended as of late this is an achievable task. If the Raps don’t manage to keep these guys on the outside it’s very possible that the Wizards spend a lot of time on the charity stripe which doesn’t bide well for the Raps.

Quick-Start: Like most road games the Raps need to start fast. This is even more important on the tail end of a home/away back-to-back. If the Raps fall behind early it will be very hard to mount a comeback. Washington also played last night (a loss to the 76ers) and will want to get out of the gates quick to get the fans behind them and keep their energy up.

The Raps are starting to round into form despite the bumps and bruises and if they can pull out tonight’s win they will be well on their way to building a nice cushion prior to the mean schedule that lies ahead later this month.