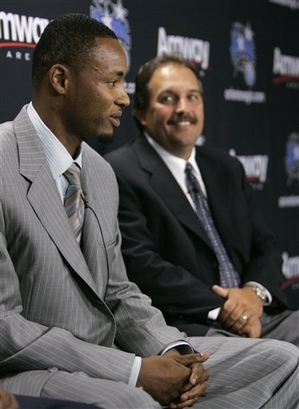 Lacing Them Up: Yesterday’s post had a bit of anger and frustration in it.

This one is full of disappointment.

In a game that Toronto should have won, they instead let Orlando pull away with only a few minutes left and ended up losing 105 to 96. Chris Bosh had 26 points and 10 rebounds in the loss but the Raptors performance overall simply didn’t get the job done. It was almost depressing to watch a select few Dinos try and carry the load and completely unacceptable that Toronto’s best player through five games has been Juan Dixon in terms of consistency. Dixon is averaging over 10 points a game coming off the bench for Toronto...which is great if it’s in addition to the starters’ production...but so far that hasn’t been the case.

A Numbers Game: Last night’s game was brought to you by the numbers 6 and 20 and by 38 per cent! Yep, that’s what the Raptors shot from beyond the arc and from the field respectively. The Raptors’ defence wasn’t brutal, but regardless, when you shoot that poorly, it makes it tough to win no matter how many stops you get. I’m not sure if Toronto needs Dave Hopla back or what, but players like Anthony Parker, Jason Kapono and Carlos Delfino could use a tune up. Together the Raptors’ wings were 6 for 22 on the night...

The Turning Point: Once again Toronto got down by a large margin in the first quarter and had to crawl back. Unlike the Boston game however, after briefly taking the lead with under five minutes to go, the Raptors let it slip away for good without giving OT a second thought. And while I’m sure this is going to be a controversial topic today, I’m just not sure I agreed with Mitchell’s decision to go back to Ford with only about four minutes left in the contest. TJ had a solid game, but when he re-entered, the pace took a noticeable shift and things started to unravel. It’s both a tough situation to put TJ into, and a case of "I’m just not sure why you’d want to mess with a good thing." It was obviously on the minds of Chuck and Leo as well that maybe staying with Jose was the way to go but both towed the company line and simply stated that "Sam knows best." Well, that doesn’t mean he always knows best however and I think in this case he should have left well enough alone as this seemed to be the game’s final turning point.

I’m starting to get a hankering for the old number 24.

It’s only game 5 but this is three games in a row now where I find myself saying it’s only game whatever. The offence is relying far too much on jump shots, the ball movement isn’t there, and even when CB4 gets the job done like he did last night, his wings aren’t knocking down shots or driving the ball to the basket.

To make matters worse, opposing teams’ wings are having a field day offensively with the Raptors’ starting 2’s and 3’s. Toronto had issues defending those positions last year and this year it looks ever worse so far. Case in point:

Even in Toronto’s crushing win over New Jersey, Richard Jefferson had 27 points. Right now the Raptors just aren’t getting much from either starting wing at either end of the court and without at least some production, I fear that Toronto’s going to be consistently digging themselves out of first quarter holes.

So what now? It’s not crisis mode, hell, crisis was a few years ago when the team started one and 15...but I think the team needs a shake-up. The problem is, where to shake?

Andrea is obviously struggling but I’m not sure bringing him off the bench right now is going to do wonders for his confidence. I would have preferred that Mitchell did this to start the season and perhaps later on put Bargnani in as the starting 5. But no sense crying over spilt milk, Bargs has gotta play through this.

What about other options at the 2 or 3?

I don’t know about that either. I feel like Mitchell isn’t going to move Parker anywhere and that Kapono’s contract will keep him in the lineup for now.

Playing Philly next is perhaps a solution in itself in some ways but I wonder if maybe a starting line-up of Rasho at the 5, Bosh at the 4, Bargnani at the 3, Parker at the 2, and Ford at the 1 might work. This keeps Bargs in the rotation and perhaps limits his foul issues and gives the Raptors some more size to work with up front. Hump has been coming off the bench nicely so he could replace either the 4 or 5 spot as a sub. Even if it's just for a game to get Bargnani going again, it might be worth it, especially against Philly who should have a tough time matching up.

This of course means sending Kapono to the bench but considering he had nine points on 3 of 11 shooting and one rebound in 33 minutes last night, I’m not sure that’s going to matter.

With Philly up next Toronto has a good chance of getting back on track...let's hope that Sam and his staff make the necessary adjustments to get that win.