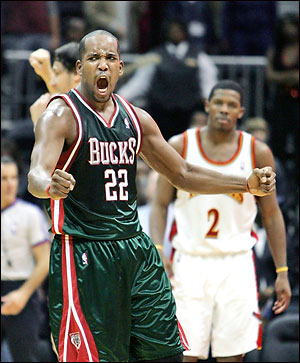 Lacing Them Up: Tell me if this sounds familiar:

Do you think Jim Todd handed over his old playbooks?

The Raptors were completely out-played in their 112-85 loss to the Bucks last night and looked lost at both ends of the court.

Now I’m not going to mince words here – Chris Bosh and Andrea Bargnani need to start playing like the franchise players they are.

Sure it’s early in the year and Bosh is probably still not 100 per cent in terms of health and conditioning (although he’s claiming he is)…but this offense is predicated on these two, especially Bosh, drawing double teams and opening lanes. Right now that’s not happening and as a result, you get last night’s debacle in which you saw virtually no ball movement and jump shot after jump shot.

A Numbers Game: The Bucks shot 60.3 per cent from the field. That’s really the only important number from last night. Sure the Raps lost the battle of the boards by 13 and once again had issues getting to the free throw line, but allowing Milwaukee to hit buckets at that clip did them in plain and simple. And that wasn’t even the worst of it! The Bucks shot 76 per cent in the first quarter!

The Turning Point: There wasn’t much of a turning point in this one. The Bucks leaped out of the gate and never looked back. I guess the first thing though that indicated that it might be a long night for the Toronto Raptors was Desmond Mason. He was perfect from the field and hit some of the flukiest shots possible. That’s not to say that Mason didn’t play well though, he established deep position, slashed to the basket, and made me rehash once again why I so wanted the Raptors to make a play for him last off-season.

Yi looks to be the real deal so far this season.

Not – Chris Bosh and Andrea Bargnani. In the past two games, the franchise cornerstones have struggled with their offense and as a result, the entire Raptors squad has looked out of synch. Andrew Bogut is a solid defender but there was no reason why Bosh couldn’t have been more aggressive, even in calling for the ball. He picked up two quick fouls, as did Bargs, and this limited his effectiveness in the first half. But in the second, and even at the start of the first, he just didn’t command the attention that was needed to open things up for his teammates.

As for Il Mago, I’m not sure what to say. It’s only game four, but the last two games he’s just looked a bit lost in the shuffle. His intensity really needs to come up a few notches to give the Raptors that second punch, especially if Bosh is struggling.

Lukewarm – Sam Mitchell. It’s tough to put a coach in the "hot or not" category but I wanted to give Mitchell some credit even in the blowout. He tried every lineup imaginable and had it not been for his use of Kris Humphries and Juan Dixon, Toronto might have lost by 50. It’s gotta be frustrating for him when he finally gives someone like Jorge Garbajosa a shot and Garbs comes right in and jacks up a 3.

That being said, I did think that the Bucks looked more prepared tonight. They made some nice play-calls to take advantage of mismatches and their offence just looked crisper. Now whether the latter was because Toronto was still thinking about Sunday’s Ray Allen dagger, or Jim Todd’s familiarity with the Raptors’ offence, or Sam Mitchell simply being one-upped by the Bucks’ staff, I’m not sure. But the onus lies on the players to get the job done and they certainly did not last night.

Moving On: The Raptors must know what the Nets felt like after Toronto laid the wood to them last week. New Jersey luckily had a game the next night and therefore a chance to erase the memories of their dreadful performance. The same is true for Toronto, who now go up against Orlando this evening and have a chance to right the ship which has evened out at two wins and two losses.

I won’t beat a dead horse here, but Toronto really needs a lot more Chris Bosh as previously mentioned. Even when he struggled against Boston he got to the free-throw line and impacted the game at the defensive end. That wasn’t the case tonight and if the Raps want a shot at beating the Magic, the offense has to revolve around CB4.

Andrea had his coming out party against the Magic last year and I’m expecting big things from him as well. He’s seemed timid the past two matches and watching Yi go to the rim and aggressively look for his shot, you had to wonder who was the rookie, and who was the sophomore.

I’m looking for a big bounce back game from both and together they represent my first key to a Raptors’ win. If they can get going, Toronto’s offence should open up and the shots should start to fall.

The second thing I’m going to be looking at is Toronto’s work on the boards and transition play. Last night Milwaukee dominated the glass and it allowed them to get out and score easy baskets in transition. Orlando can do the same thing with athletic bigs like Howard and Lewis, and shooters like Hedo Turkoglu and JJ Redick. Therefore Toronto needs to get rebounds to stop Orlando from ramming the ball down the Dinos’ throats.

The final key for tonight’s game in my mind is consistency, especially from the 3 spot on the floor. Mitchell’s tried just about everyone at this position but has been unable to get steady production at both ends of the court. Some good shooting from Kapono, coupled with some streaky defense, and vice versa for Delfino. (In fact, if you could combine Jason Kapono and Carlos Delfino into one player, wouldn’t the Raptors be all set?)

It isn’t helping that Anthony Parker has started off slow again putting a good deal of pressure on TJ Ford to score more than perhaps he should need to. The team has been getting a huge lift from Juan Dixon off the bench but the starters as a unit need to get leads, not give them up hoping that the bench will bail them out. Tonight the Raptors seem to have a clear-cut advantage over the Magic in the "pine" department and I’m hoping to see the entire second unit support the first group,

Otherwise it could mean the team’s second loss in as many nights, with two more games to go in the next three.