3 In the Key - Game Day Preview vs. Bucks

Share All sharing options for: 3 In the Key - Game Day Preview vs. Bucks 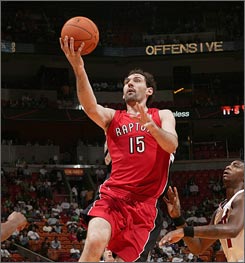 Having suffered a heartbreaking loss on what was one of the best sporting days in a long time (see Pats vs. Colts, Adrian Peterson, Raps vs. Celts, etc.) the Raps are looking to rebound against the Milwaukee Bucks. Unfortunately, and perhaps even more so, surprisingly, trying to avoid the .500 mark is not the only issue facing the team as of late...just ask Jorge Garbajosa.

Maybe as Raps fans we have been spoiled since the arrival of Bryan Colangelo. In many ways the players that he has brought together are all good to outstanding citizens and the Raps really do capture the "team" concept better than many of the other squads in the L. Doing what is in the best interest of the team, all working towards and common goal, and riding the hot hand are all things one thinks of whether describing the Raps. There are no pending law suits, trade demands or coaches smashing hotel lamps....the biggest concern has been the "potential" controversy at the point guard position and that’s all hypothetical at this point. As a result it was almost shocking to read about Garbo coming out and complaining about PT, in particular this early in the season.

In some ways maybe it isn’t news and just a blip on the radar. It’s hard not to go a day without reading about some NBA baller complaining about something. Besides, facts are facts and the reality is that the guy hasn’t played much. The initial hunch would have been that this was because of the ankle injury and the team simply trying to play it safe. It looks however, that there is more to this. Garbo claims he is healthy and prior to the injury last season he got lots of burn. So what’s changed? The biggest change is talent. Insert Delfino and Kapono. Sam Mitchell has always stuck to his word that they best players play. Maybe it is as simply as Garbo not being the best guy at this point in time. Whatever the issue, and it’s important not to blow this out of proportion at this point, it will get resolved, even if it means extra time in the gym for a guy who wants more burn.

Now, on to the task at hand.

If you got the SI season preview with the Celts big three on the cover you will notice that they have the Bucks in 11th spot and the Raps at 8th. I for one think they are going to be wrong on both counts. We have talked at length about the Raps and how they are being underrated, or perhaps better put....underappreciated. When it comes to the Bucks...they’re my early vote for most improved and most likely to surprise.

GM Larry Harris had a very turbulent off-season this past summer but one in which he managed to obtain or keep more talent then he lost. The drafting of Yi Jianlian was questionable (not on talent but on the basis that Yi threatened not to play for the Bucks) and the matching of offers to Mo Williams and Charlie Bell were not all together appreciated by the players themselves. Nevertheless Harris has assembled a team with some unquestionable talent and versatility. Now that players likeCV Smooth, Andrew Bogut and Michael Redd are now healthy it’s hard not to believe that this team doesn’t have the talent to make a push for at least the 8th spot. They have started the season 1-2 but the rust from the extended hiatus from basketball for most of the guys injured last year is evident. Just check out the shooting percentages. Redd is at .407, Bogut at .385, and Villanueva at .300. You know this can’t go on for too long. Keeping those shooting percentages down is actually one of the three keys to tonight’s game....

1. Don’t Let the Bucks Heat-up: Defense is always a key to victory but it’s essential that the Raps bring their defensive A-game to the table. Should one or two of these guys finally get heat up, in particular a player like Michael Redd, it could mean trouble for the Dinos. Contested shots will be key to getting the W. The onus will lie on Parker, Delfino and Kapono to make it tough on the Bucks shooters in hopes that the shooting woes continue.

2. Rebounding: I know, I know it’s starting to get repetitious already so let’s focus more closely on the match-up at the five spot. Two former number one overall picks with very different games will be battling it out. One with more limited range but better glass work (Bogut is averaging over 10 rebounds a game) vs. one with what seems to be unlimited range but weaker rebounding numbers. Whoever wins this battle will likely have a large bearing on the outcome of this game. Can Bargs draw Bogut away from the painted area? Or perhaps more importantly, can Bargs hold his own on the defensive end in order to prevent second chance opportunities? This will be a great match-up.

3. CB4: Chris is going to have some interesting match-ups tonight against Yi and Charlie. Bosh should be able to exploit both, in particular the rook. Although Jianlian has been impressive in spurts in this early season he has a tendency, like many rookies, to get into foul trouble. Bosh is due for a big game despite the limited minutes, and a match-up against a rook may be just what the doctor ordered. The Bucks really have no answer for CB4 and I expect to see many trips to the free-throw line.

These are the games the Raps need to, and should win. Let’s see if they can keep a perfect record away from the ACC early in the season.