3 in the Key – Game-Day Preview vs. Celtics

Share All sharing options for: 3 in the Key – Game-Day Preview vs. Celtics 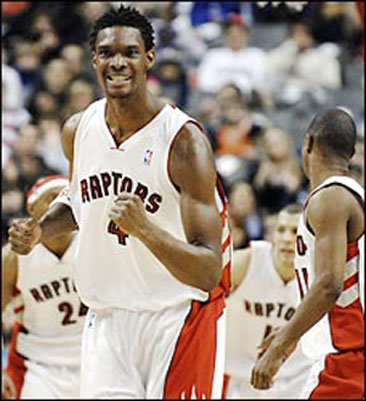 I’m still pinching myself about a few things this NBA season.

First of all, that the season has actually started. I still feel like it’s a bit of a dream to have the Raptors playing again after what felt like an eternity of an off-season.

Second, that Toronto laid the beating on New Jersey that they did on Friday night, especially considering the trouble they had playing in the Swamp last year.

And finally, that the buzz surrounding this afternoon’s game against the Boston Celtics of all teams, is like that of a playoff match. Oh, and did I mention this is happening in Toronto’s third game of the season?

Naturally with the upgrades the Celtics made this off-season, any match the formerly cellar-dwelling C’s are involved in takes on a new level of interest. But in today’s case, the level is that much higher:

-Both the Raptors and Celtics look to be division favourites.

-Both squads are undefeated in this young season.

-And both teams are coming off impressive demolitions of high caliber foes.

For both Raptors and Celtics fans alike, today’s game could represent the first in a long line of very exciting matches and the beginning of a glorious rivalry.

But hey, why not get a take on the game from the home of Celtics fans everywhere, Celticsblog? I spoke to Jeff Clark of Celticsblog and asked him three questions in preparation for today’s collision. He asked me three as well for my take on the game and the Raptors this season and we'll be looking to link up before each Celtics/Raptors match this season.

Raptors HQ: First off, with all the hype regarding the Celtics, how good does it
feel simply for the team to be relevant again? Do you ever just shake your
head at the fact that in basically five months, Danny Ainge has gone from
"GM soon to be axed at this rate" to "possible NBA executive of the year?"

Celticsblog: Every day. It is the strangest feeling you can imagine. I actually have to
re-learn how to root for a winning team. I always knew Ainge was going for the home run, I just didn't know if he could pull it off. Boy did he ever.

RaptorsHQ: How about the team itself, do you think this squad can get to the finals
without much of a bench, or without much playoff experience for that matter even with G.P.A.?

Celticsblog: I think the bench is highly underrated. Posey is a defensive stopper and Tony Allen could be huge for us if he's healthy this year. The thing is, with this big three, we're going to have one of them on the court at all times, so that makes your bench that much better. And we are only really going 8-9 deep, so if those 6, 7, 8 guys are good, that's all you need.

RaptorsHQ: Matchups for Sunday, what advantages do you see the Celtics having over the Raps and what do you think the keys are to a Celtics' win?

Celticsblog: KG is a matchup nightmare for any team, period. Nobody can match up with Pierce or Ray Allen either. With that said, Toronto is so deep that they'll really put that underrated bench of ours to the test. If the Raps are hitting the 3 like they did in that first preseason game, it is going to be a tough, tough game.

I have to agree, and that leads me to the first of our three keys to a Raptors win:

1) Bench Play: As Jeff mentioned, the Raptors are really going to have to go out today and show just how valuable their bench is. The Celtics on paper have the best starters of the two teams but it’s Toronto who has the superior second unit. The second unit has given Toronto a huge boost in the last two games and I expect that to continue this afternoon. In particular, players like Juan Dixon and Carlos Delfino need to come in and take advantage of the Celtics’ lack of quickness on the perimeter. With the exception of Eddie House and Tony Allen, the rest of the Celtics’ bench is filled with big bodies like Glen Davis, Leon Powe and Brian Scalabrine. I’m expecting Toronto to take advantage of this with quick passes, crisp rotations and draw and kicks to find open looks. If this happens, just like in New Jersey on Friday night, it’s going to be a long night for their opponents.

Laugh it up boys, you do know that Scot Pollard is one of your key reserves right?

2) Chris Bosh and the starters: That being said, the starters have to start doing a better job of getting off to a good start. They were ok against Philly, but it was really a combination of bench and starters that were the most effective. Sam Mitchell isn’t afraid to mix things up, but today looks to be a day in which players like Anthony Parker and Jason Kapono really take things up a notch both offensively and on the defensive end. In particular though, the Raptors are going to need a big day from Chris Bosh. I’m not saying he needs to score 70 points, but KG has been playing like a man possessed and CB4 needs to slow him down. Bosh doesn’t look up to speed yet and this will be his top test so far. If he can force KG into tough shots and keep him off the glass, this gives the Raptors a huge advantage.

3) Perimeter Defense: It’s only two games, but the Raps are currently the fourth best scoring team in the league and top defensive team in terms of opponent scoring. Incidentally they’re tied at the top with none other than the Boston Celtics as both have held teams to an average of 83 points. The question of who can defend the perimeter may very well be the deciding factor in this game. The Raptors can bomb away from the perimeter and thus the Celtics must get out on Toronto’s shooters. Conversely, the Celtics have several great slashers and one of the fastest point guards in the league. If Toronto can’t hold the fort on the perimeter it could either start a Celtics’ parade to the foul line or open up looks for Ray Allen and others.

In particular I’ll be watching the point-guard match-up tomorrow. Toronto looks to have the clear advantage, but too many times last year TJ Ford got caught up in one-on-one games with Rajon Rondo. Both players are similar in style and skill-set but I expect this year’s version of TJ to use his experience and improved shooting touch to make the former Kentucky product pay for taking too many risks on D.

Above all else, I’m really looking forward to seeing just how these teams match up against each other. Are the Celtics over-hyped? Are the Raptors too much of a jump-shooting club to compete against teams like Boston? Does Toronto’s depth give them a huge advantage?

Looks like we’ll start getting the answers to these questions in a few hours...